The use of cluster munitions has spread to battlefields in Ukraine and Syria, according to groups seeking to ban the weapon.

In a report released Oct. 20, Human Rights Watch documented the use of cluster munitions in fighting between Ukrainian government forces and pro-Russian rebels in more than a dozen urban and rural locations. “While it was not possible to conclusively determine responsibility for many of the attacks,” the report said, “the evidence points to Ukrainian government forces’ responsibility for several cluster munition attacks on Donetsk,” the largest city in eastern Ukraine. 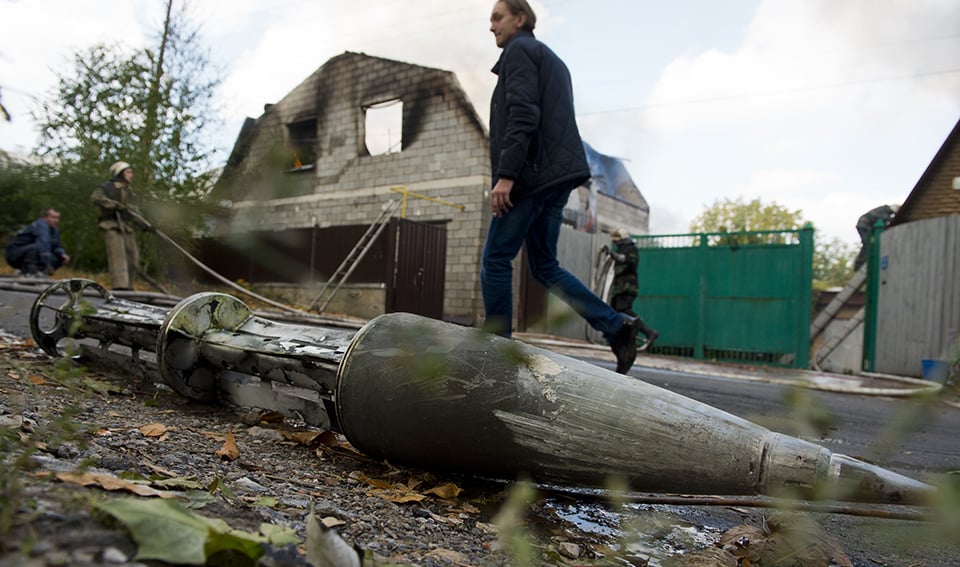 The Ukrainian government denied responsibility. “The Ukrainian military did not use weapons prohibited by international law; this applies to cluster munitions as well,” a spokesman said Oct. 21, according to RIA-Novosti.

The Organization for Security and Co-operation in Europe, which monitors the Ukraine conflict zone, said it had received no evidence that government troops had used cluster bombs, according to an Oct. 22 Reuters report.

Cluster munitions are rockets or bombs that contain dozens or hundreds of smaller munitions. After launch, the container for these submunitions disperses them over a wide area. The submunitions, while designed to explode when they hit the ground, often fail to do so, remaining explosive and dangerous to anyone who touches them.

The Kiev government has not acceded to the 2008 Convention on Cluster Munitions (CCM), joined by 114 countries. The treaty bans the use of cluster munitions because of the danger they pose to civilian noncombatants.

In Syria, the government’s cluster munitions have killed at least 1,600 people in the past two years, by far the deadliest use of the weapon in a decade, according to the annual report of the International Campaign to Ban Landmines-Cluster Munition Coalition (ICBL-CMC), issued in August. Of the reported victims, 97 percent were civilians. Syria is not a party to the CCM.

Syrian forces exploded at least 249 cluster munitions, covering 10 of Syria’s 14 provinces, according to the ICBL-CMC report. The groups found that at least seven types of Russian- and Egyptian-made cluster munitions have been used in Syria, including air-dropped bombs, dispensers fixed to aircraft, and ground-launched rockets, as well as at least nine types of explosive submunitions.

Not since the U.S.-UK invasion of Iraq in 2003 have dispersed small explosives injured or killed so many people. According to a 2003 Human Rights Watch report, the invading forces used nearly 13,000 cluster munitions, containing an estimated 1.8 million submunitions, in three weeks of major combat. UNICEF estimated that more than 1,000 children in Iraq were killed or injured by U.S.-made cluster munitions in 2003.

The ICBL-CMC report also noted the use of cluster munitions in Ukraine last year, but said its researchers could not determine whether the Ukrainian government or the rebels were responsible.

The use of cluster munitions in Syria and Ukraine “will only prolong the humanitarian consequences of these devastating conflicts in the years to come, with very little, if any, military benefits,” said André Sobral Cordeiro of the Portuguese Foreign Ministry at the annual meeting of CCM parties in San José, Costa Rica, in September.

The use of cluster munitions in Syria and Ukraine has not yet reached the level of use in Laos and Lebanon, the two countries in the world most contaminated by the weapons.

Eleven people have been killed and 31 injured by cluster munitions in Lebanon since 2006, according to a report issued by the Mine Advisory Group, a UK organization that seeks to ban landmines and cluster munitions.

Casualties have been reported in Laos, but researchers say there are no reliable tallies of the numbers.
Laos and Lebanon, which are parties to the CCM, also did the most to dismantle and destroy the weapons in 2013, according to the ICBL-CMC report. Together, the two countries accounted for 82 percent of the submunitions destroyed worldwide in 2013 and 72 percent of the land cleared.