Captain Richard Dromerhauser of the U.S. Navy led one of the most significant arms control accomplishments in recent years: the maritime destruction of a large portion of Syria’s chemical weapons arsenal in July and August 2014. As commander of the MV Cape Ray, Dromerhauser oversaw the crew of 135 people that neutralized 600 metric tons of dangerous chemicals without mishap.

Arms Control Today caught up with him by phone on September 25 at the headquarters of the U.S. Navy’s 6th Fleet in Naples, Italy.

The interview, conducted by Jefferson Morley, has been edited for length and clarity.

What brought you to the Navy?
My goal was to graduate high school—just kidding. I was looking at a career in an engineering field, and I had looked into the Naval Academy. I had the desire to serve my country, and I thought this was a great opportunity to get an education. I came from a working-class background. I was the oldest child and also the first in my immediate family to go to college.

How did the Cape Ray assignment come to you?
We needed to move the neutralization operations to sea. The technology to do the neutralization was something we had proven. What we did then was to combine the two in a shipboard environment. I was able to bring a lot of experience that I had in past commands and also in different jobs that I had before to bear on this.

Were you following the story about the use of chemical weapons in Syria that led to the mission? A thousand people were killed with chemical weapons.
We follow closely all the activities and the issues that go on around the [Mediterranean] theater. I was following that, just as I was following all the other activities that were occurring at that time. Of course, what a horrible tragedy. And I think also, what a great opportunity that we were given: to remove this [material], from not just the Syrian arsenal, but from the global arsenal.

What does 600 tons of chemical weapons look like?
Like a lot of containers that you see on 18-wheelers. The Cape Ray and all the Cape-class ships are very large and able to carry a lot. We processed 24 hours a day, six days a week. 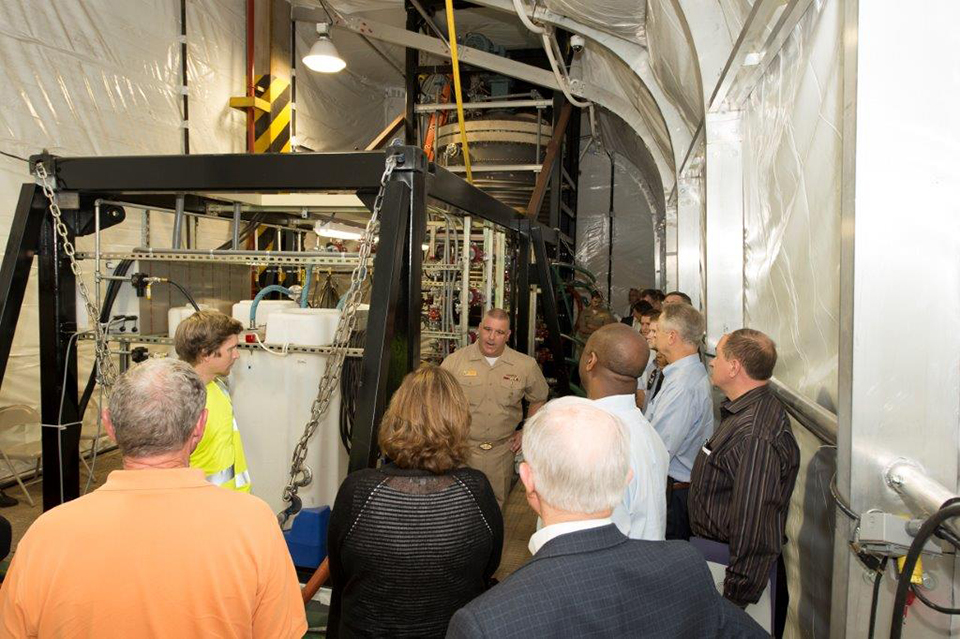 Was there a most dangerous moment in the transfer of the chemicals?
No, I’m going to say outright I never felt like, “Hey, this is a bad situation.” It’s really a testament to the intense amount of planning and training that we had. When the ship first left the [United] States, there was a period of time where we were waiting for all the material to be [removed from Syria]. Rather than hang our heads and go, “Boy, what are we waiting for?” we jumped up on that.

That was a fantastic opportunity to train, to go over processes, look at the systems, and really chalkboard out how we were going to do this. I had the ability to meet each day with not only the master of the vessel itself, but the lead chemist. We made a point every day to meet at a set time, regardless of what was going on.

One of the best decisions we made was, we said we need to find a way to empower every single person on this [ship]. Whether they’re moving material or whether they’re a lookout, or working to keep the hot water going, [we said,] “If you see something that’s not right, stop everything and let’s reassess.”

How did it feel to get a call afterward from Defense Secretary Chuck Hagel?
That was a great testament to all the hard work and accomplishments of everyone aboard. I was on the other end of the line, but I really wished we were able to get a speaker phone out to not just the ship, but to every one of the folks in the supporting allies, the folks who were out there with us.