“Your association has taken a significant role in fostering public awareness of nuclear disarmament and has led to its advancement.”
– Kazi Matsui
Mayor of Hiroshima
June 2, 2022
Solving the Iranian Nuclear Puzzle: Toward a Realistic and Effective Comprehensive Nuclear Agreement

For well over a decade, the sensitive nuclear fuel cycle activities of the Islamic Republic of Iran have been at the center of international concern about the further spread of nuclear weapons.

In November 2013, after years of on-and-off negotiations, Iran and six world powers concluded an interim agreement that pauses the some of Iran’s most proliferation sensitive activities and opened the way for further talks on a long-term, comprehensive solution to would ensure Iran’s nuclear program will be exclusively peaceful.

This briefing book is designed to provide casual observers and experts alike with an overview of Iran’s nuclear history and diplomatic efforts to prevent a nuclear-armed Iran, and an up-to-date summary of the status and capabilities of Iran’s nuclear program.

It is the third and substantially revised edition of “Solving the Iranian Nuclear Puzzle” from the Arms Control Association’s research staff.

The volume also reviews the major issues and explains the policy options for the comprehensive agreement. These include: how to limit Iran’s uranium enrichment capacity and plutonium production potential, the significance of more extensive IAEA safeguards, options for resolving concerns about possible weapons-related experiments by Iran, and the options for the removal of nuclear-related sanctions against Iran.

This report was made possible by the generous support of our members and donors, without which this report would not have been possible. In particular, we wish to thank the Carnegie Corporation of New York, the William and Flora Hewlett Foundation, the John D. and Catherine T. MacArthur Foundation, the Ploughshares Fund, and the Prospect Hill Foundation, which provide support for ACA research and public education programs on nuclear nonproliferation issues. 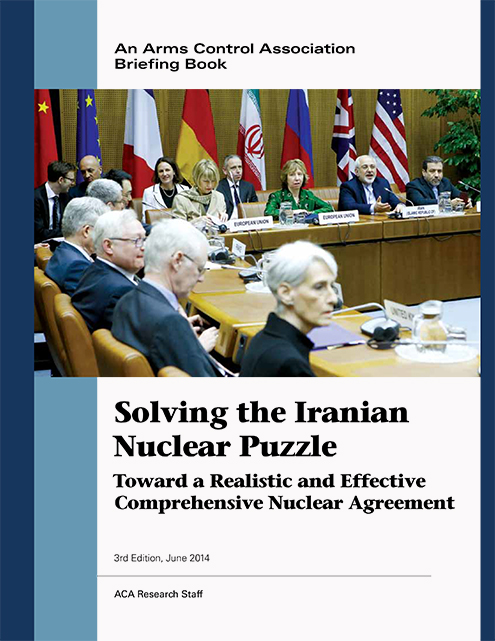