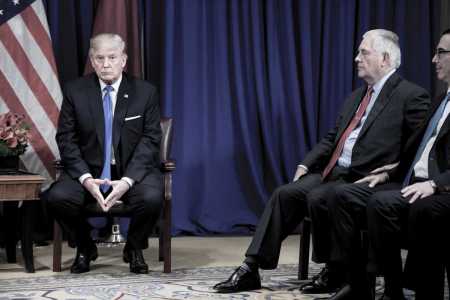 “The President’s gambit is irresponsible and dangerous. Any attempt by the White House or Congress to unilaterally change the terms of the highly-successful nuclear deal with Iran risks setting Washington on a course to violate the deal.” said Daryl G. Kimball, executive director of the Arms Control Association.

Trump signaled that he will withhold certification because he believes the sanctions relief granted to Iran is not proportional to the restrictions Iran is abiding by under the agreement. He further said he would push for Congress to pass legislation requiring sanctions to snap back into place if Iran does not meet additional limits that are not currently mandated in the JCPOA.

“It is critical that Congress refrain from any actions that would effectively seek to renegotiate the terms of the JCPOA. Any steps seeking to dictate an extension of the JCPOA restrictions or add additional requirements through U.S. legislation will create a major schism with U.S. allies and could push Iran to resume troublesome nuclear activities restricted under the deal,” Kimball said.

“Trump’s plan to unilaterally extend the limits of the current deal by holding Iran hostage to the threat of reimposing U.S. sanctions is a fantasy that jeopardizes an agreement that is verifiably blocking Iran’s pathways to nuclear weapons,” said Kelsey Davenport, director for nonproliferation policy.

“Trump’s pressure-centric approach only risks undercutting Iranian incentives to remain in compliance with the accord and isolating the United States from its negotiating partners, all of whom reject reopening the agreement. With the looming threat posed by North Korea’s nuclear program, the United States cannot afford to manufacture a second nuclear crisis,” she added.

"If the Trump administration is truly concerned about the future of Iran’s nuclear program, Washington should meet its obligations under the deal, vigorously enforce the accord, and seek global support to build on the innovative nonproliferation elements of the agreement.” Davenport said.

“Trump’s reckless actions have consequences beyond threatening the nuclear deal with Iran. He risks triggering a spiral of proliferation and destabilizing nuclear competition in the region, and beyond,” Kimball added.