“Your association has taken a significant role in fostering public awareness of nuclear disarmament and has led to its advancement.”
– Kazi Matsui
Mayor of Hiroshima
June 2, 2022
Updated ACA Report: "Assessing Progress on Nuclear Nonproliferation and Disarmament: 2010-2013 Report Card"

By Kelsey Davenport and Marcus Taylor

(Washington, D.C.)–This week, as more than 190 states meet in Geneva to review implementation of the nuclear Nonproliferation Treaty, the independent Arms Control Association (ACA) today released an updated study that measures the performance of 11 key states in 10 universally-recognized nonproliferation, disarmament, and nuclear security categories over the past 32 months.

“The 2010-2013 Report Card finds that the pace of progress on nuclear nonproliferation and disarmament over the past two and a half years is not equal to today’s urgent nuclear threats," said Kelsey Davenport, ACA nonproliferation analyst.

"While some states are taking important steps in key areas to reduce the dangers posed by nuclear weapons, overall progress remains limited, and key states of proliferation concern continue to engage in activities that severely undermine nonproliferation and disarmament norms. The nature of the nuclear threat requires that all states act with greater urgency,” said Davenport, a co-author of the report.

“Although nuclear-weapon states have undertaken disarmament measures and other steps to reduce the threat posed by nuclear weapons, there is much work left to be done. Moving closer to ‘the peace and security of a world without nuclear weapons’ will require accelerated action on disarmament from the United States and other nuclear-weapon states and concrete action to reduce the role of nuclear weapons in their military strategies,” said Marcus Taylor, ACA’s Herbert Scoville Jr. Fellow and co-author of the report.

“While several nuclear-weapon states have reduced the size of their nuclear arsenals, nearly all of the nuclear-armed states are investing enormous resources to develop and field new nuclear weapons delivery systems, an action which reinforces the perceived necessity of a nuclear deterrent and calls into question their commitment to pursue complete disarmament,” Taylor added.

“The 2011 entry into force of New START by Russia and the United States was a step forward,” Taylor said. “Russia, in particular, has taken a leadership role in nuclear disarmament by reducing its deployed strategic forces below New START deployed warhead ceiling (1,550) years before the treaty’s 2018 deadline.”

“North Korea once again received the lowest marks of all 11 states, earning an ‘F’ on seven of the 10 standards. Pyongyang continues to flout the established international nonproliferation and disarmament norms, making it a serious proliferation concern.” Davenport said.

“Although Iran and Syria do not possess nuclear weapons, their continued failure to comply with international nuclear safeguards commitments and basic export controls brings down their grades and increases the suspicion that they are engaged in illicit nuclear activities,” she noted.

“The failure of these three states to comply with nuclear nonproliferation standards erodes international confidence in the system and increases the likelihood of illicit proliferation activities. The international community must increase its efforts to engage with Iran, North Korea and Syria, and re-integrate them into the regime,” Davenport said.

“The United Kingdom once again received the highest grade of all 11 states that were surveyed, earning a “B+” overall and an “A” in five of the ten standards. London has also reduced its nuclear arsenal to the lowest level of any of the five original nuclear-weapon states and continues to lower the size of its nuclear forces,” Taylor noted.

“Unfortunately, India and Pakistan continue to build up their nuclear arsenals and produce fissile material for nuclear weapons. Although the warheads are stored separately from the delivery systems, the increasing size of their stockpiles undermines the nonproliferation and disarmament regime,” Davenport said. “The nuclear rivalry between these countries also is inhibiting progress toward negotiations on a global fissile material cutoff treaty,” she noted.

“In sum, this report indicates that further action must be taken by all 11 states if they are to live up to their international disarmament and nonproliferation responsibilities. By tracking the progress, or lack thereof, of these states over time, we hope this report will serve as a tool to encourage policymakers to increase efforts to reduce the risk posed by nuclear weapons,” Davenport said.

“While all states have a responsibility to meet their nonproliferation, disarmament, and nuclear security commitments, U.S. leadership is critical,” said Daryl G. Kimball, ACA executive director.

“This report underscores that since the significant progress achieved during President Barack Obama’s first two years in office, the administration’s nuclear disarmament and nonproliferation effort has lost energy and focus,” Kimball said.

“To move the United States and the world farther away from the nuclear precipice, Obama and his team need to move with greater urgency to fulfill the commitments he made—and the United States has made over the years—to reduce nuclear dangers,” Kimball said.

Basis for the “Standards”

The nuclear Nonproliferation Treaty (NPT) has long been recognized as the cornerstone of the nuclear nonproliferation system. In the 40 years since the NPT entered into force the system has been regularly updated, expanded, and reinforced through bilateral agreements, UN resolutions, Security Council decisions, ad hoc coalitions, voluntary rules-of-the-road, and through concrete actions.

It is the view of the authors of the report that in many cases these standards are not high enough and additional measures are needed to reduce and eventually eliminate the nuclear threat. However, the Report Card does not grade states on whether they are following recommendations formulated by the Arms Control Association, but rather it assesses whether key states are meeting internationally-recognized nuclear nonproliferation, disarmament, and nuclear security commitments.

China (Overall grade: B-)—China earned higher grades for its efforts on nuclear security and hindering the illicit trafficking of nuclear goods. Additionally, China is no longer believed to be increasing the size of its nuclear arsenal.

However, China is still the most opaque of the nuclear-weapon states and continues to avoid transparency on its nuclear weapons program and force structure. China received a large deduction in its nuclear export grade to an “F,” given that the construction of the Chashma-3 and -4 reactors in Pakistan, and the March 2013 announcement of Beijing’s intent to build a fifth nuclear power reactor in Pakistan, violates China’s obligations as a member of the Nuclear Suppliers Group. (2010 grade: B-)

Although France maintains a relatively small nuclear force, Paris did not conduct any nuclear force reductions during the time frame of this report and has not indicated that it will do so in the near future. (2010 grade: B)

Russia (Overall grade: B)—Since the publication of the 2010 Report Card, Moscow ratified the New START treaty in January 2011. Although the treaty required that Russia and the United States reduce their deployed strategic warheads to 1550 by 2018, Russia has already reduced its deployed strategic warheads to 1,480 as of March 2013, well below the treaty’s final requirement. Russia also ratified the protocol to the Treaty of Pelindaba, which established a nuclear-weapon-free zone in Africa. These two actions brought Russia’s overall grade up to a “B.”

Despite Russia’s progress on nuclear force reductions, Moscow has opposed further reductions in nuclear alert levels, a critical step in reducing the likelihood of an accidental use of nuclear weapons. (2010 grade: B-)

United Kingdom (Overall grade: B+)—The United Kingdom earned the highest grade of any state measured in this report and has reduced its nuclear arsenal to the lowest level of any nuclear-weapon state recognized by the NPT. London began a series of force reductions in 2011 and has continued to reduce the size of its nuclear arsenal during the time frame of this report. Additionally, the United Kingdom scores high grades for implementing international export control and illicit trafficking guidelines. (2010 grade: B)

United States (Overall grade: B-)—The United States ratified the New START treaty with Russia in December 2010. Since the entry into force of the treaty, Washington has slowly reduced the size of its deployed strategic forces to 1,654 warheads, which is still 100 warheads above the treaty limit. American officials have stated that the United States will meet the treaty’s target by the deadline of 2018.

India (Overall grade: C+)— India continues to receive low grades for increasing the size of its nuclear arsenal and producing weapons-usable fissile material during the timespan of this report. While India has maintained a nuclear testing moratorium, New Delhi has not made a formal commitment to halt nuclear testing by signing the CTBT. Therefore India also received low marks in the areas of banning nuclear testing.

However, India is taking steps to reduce the chances of accidental or miscalculated use by storing its warheads separated from their delivery systems and receives high marks for updating its export controls to follow the guidelines of multilateral export control initiatives and following through on nuclear security commitments. (2010 grade: C+)

Israel (Overall grade: C-)­—Israel's refusal to acknowledge its nuclear weapons-possession severely undermines adherence to international nonproliferation and disarmament standards. The lack of transparency hinders assessments across several standards, including the size of Israel’s arsenal, the alert levels of its nuclear weapons, and the status of its fissile material production.

Pakistan (Overall grade: C-) —Pakistan has taken significant steps over the past two years to strengthen its adherence to multilateral export control initiatives and disband illicit trafficking networks, mostly notably the A.Q. Khan network, which sold sensitive technology and information to other states.

Pakistan, however, has the fastest-growing nuclear arsenal and continues to not only produce fissile material, but block progress on an international treaty to verifiably ban such production for all states. Pakistan receives failing grades in these areas. While the continued political instability in Pakistan and the threats posed by insurgent and terrorist factions in the country place the country’s nuclear assets at risk, Pakistan does receive high marks for storing its warheads separate from the delivery systems and taking steps to increase security at nuclear facilities. (2010 grade: C-)

Iran (Overall grade: D+)—Although Iran has not yet made the decision to pursue nuclear weapons, it remains in noncompliance with its international nonproliferation obligations. Iran has failed to cooperate with IAEA’s investigations into past nuclear activities that may have military dimensions and continues to violate import sensitive dual-use technology in violation of export controls, earning Tehran low grades in these areas.

While Iran does receive credit for committing to attend a conference on creating a zone free of weapons of mass destruction in the Middle East, which was postponed and has not yet been rescheduled, its commitment to this process is questionable. (2010 grade: D)

Syria (Overall grade: D-)—Syria is widely believed to have been constructing a nuclear reactor, with the assistance of North Korea, in violation of its safeguards agreement with the IAEA. While that facility was destroyed in 2007 and Syria is not believed to currently have an active nuclear program, its failure to cooperate with the IAEA’s investigation into its past activities undermines its commitment to nonproliferation and weakens the overall regime. (2010 grade: D) 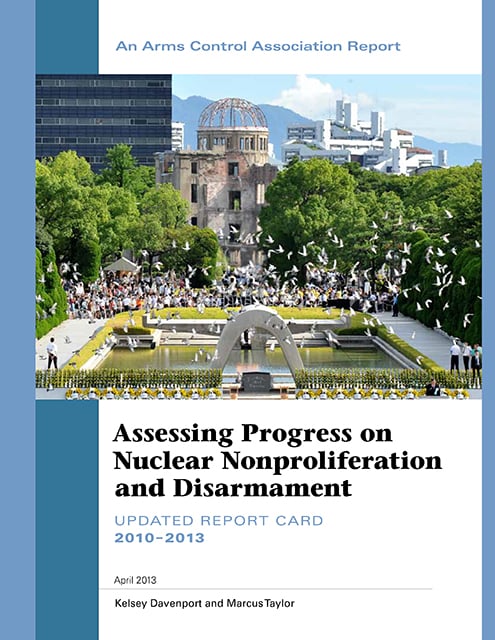