Inside the Arms Control Association
April 2022

Fifty years ago, on May 26, 1972, the first bilateral nuclear arms control agreements were struck: the U.S.-Soviet Strategic Arms Limitation Treaty and the Anti-Ballistic Missile Treaty. That breakthrough followed the entry into force of the nuclear Nonproliferation Treaty in 1970. 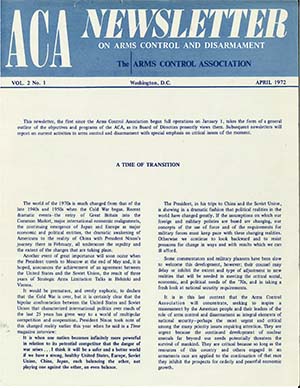 At the same time, the Arms Control Association was established as a project of the Carnegie Endowment for International Peace, becoming an independent, nonpartisan, nongovernmental organization in 1972. As the first ACA Newsletter from April 1972 notes, the organization was founded to promote support and understanding “of the need for positive steps toward the limitation of armaments and the implementation of other measures to reduce international tensions on the road to world peace.”

For more than five decades, the Arms Control Association has been a go-to source that has also shaped the debate on nuclear weapons and arms control. Since 1972, a great deal has been accomplished to reduce the role and number and spread of nuclear weapons, end nuclear testing, ban biological weapons, and eliminate chemical weapons.

But the threat of nuclear weapons persists. The global nonproliferation and disarmament regime is also at risk. Russia’s war against Ukraine has heightened the risk of nuclear weapons use and derailed progress on nuclear arms control and risk reduction.

We have huge challenges to overcome to get back on track.

You can count on ACA to smartly respond to the latest nuclear crisis, defend keystone agreements, and chart a path forward to a safer world. We especially need your support and engagement as we respond in this dangerous moment in history.

Please join friends and colleagues June 2 for our 2022 Annual Meeting at the National Press Club in Washington, D.C. Together we will mark our half-century of accomplishments in arms control and chart our course of action in the years ahead.

Our speakers and panelists will explore:

With negotiations to restore compliance with the 2015 nuclear deal between world powers and Iran at a critical juncture, the Arms Control Association coordinated and issued a joint statement on April 21 endorsed by more than 40 leading nuclear nonproliferation experts and former officials expressing strong support for a return by Iran and the United States to compliance with the accord.

“A prompt return to mutual compliance with the [Joint Comprehensive Plan of Action] is the best available way to deny Iran the ability to quickly produce bomb-grade nuclear material,” the experts' statement says. “It would reinstate full IAEA international monitoring and verification of Iran’s nuclear facilities, thus ensuring early warning if Iran were to try to acquire nuclear weapons—and possibly become the second state in the Middle East (in addition to Israel) with such an arsenal.”

Reinforcing the Taboo Against Chemical Weapons

As Putin’s war on Ukraine rages on, concern is growing that Russia might use chemical weapons. In response, the Chemical Weapons Convention Coalition, a project based at ACA, issued a joint statement declaring that “Any use or threat of use of weapons of mass destruction (WMD)–chemical, biological, or nuclear–has no place in any conflict and risks escalating the war far beyond the widespread destruction that Ukraine is currently suffering.”

The statement, signed by WMD experts from around the globe specifically, “[c]alls upon Russia, in the strongest possible terms, to respect its solemn obligations under the Geneva Protocol and the CWC not to contemplate, let alone use or threaten to use, these globally banned weapons of mass terror.”

June 2: "Arms Control Association Annual 2022 Annual Meeting." Join us at the National Press Club in Washington, D.C. for our 50th Anniversary event. A reception will follow at 6pm. Register here.

We also invite you to become a 50th Anniversary Sponsor to help propel the Arms Control Association forward in the coming years. See our sponsorship page for details.

May 3: “The Threat of Use of Nuclear Weapons and Russia’s War on Ukraine: Meeting the Legal and Political Challenge." This upcoming webinar, sponsored by the Arms Control Association, the Lawyers Committee on Nuclear Policy, and the Princeton University Program on Science and Global Security, will take place 11:00 am to 12:30 pm ET. Register via Zoom to attend.

April 12, 14, and 20: "The Forum on the Arms Trade (Virtual) Annual Conference." Co-sponsored by the Arms Control Association, this year’s discussion explored issues including the role of Congress and the executive branch in promoting human rights and corruption through arms sales.

March 28: "Briefing on the Nuclear Dimensions of the War in Ukraine." In this webinar moderated by Laura Grego with the Physicists Coalition for Nuclear Threat Reduction, Daryl Kimball (ACA), Alex Glaser (Princeton University), and Pavel Podvig (VCDNP) examined the nuclear dimension of Russia’s invasion of Ukraine, including an analysis of the risks of nuclear escalation.