With the Aug. 2 withdrawal of the United States from the 1987 Intermediate-Range Nuclear Forces (INF) Treaty, which ended the deployment of intermediate-range missiles by NATO and the former Soviet Union in Europe, plans to develop a new generation of treaty-noncompliant missiles have led to fears that they will return to the continent.

Defense Secretary Mark Esper referred that same day to the need for “proactive measures” to develop new intermediate-range capabilities in the European theater. The Department of Defense requested nearly $100 million in fiscal year 2020 to develop three new missile systems that would have violated the range limits of the INF Treaty. It tested the first of these, a ground-launched variant of the Tomahawk cruise missile, on Aug. 18, drawing swift condemnation from Russia. An intermediate-range ballistic missile test is planned for November. 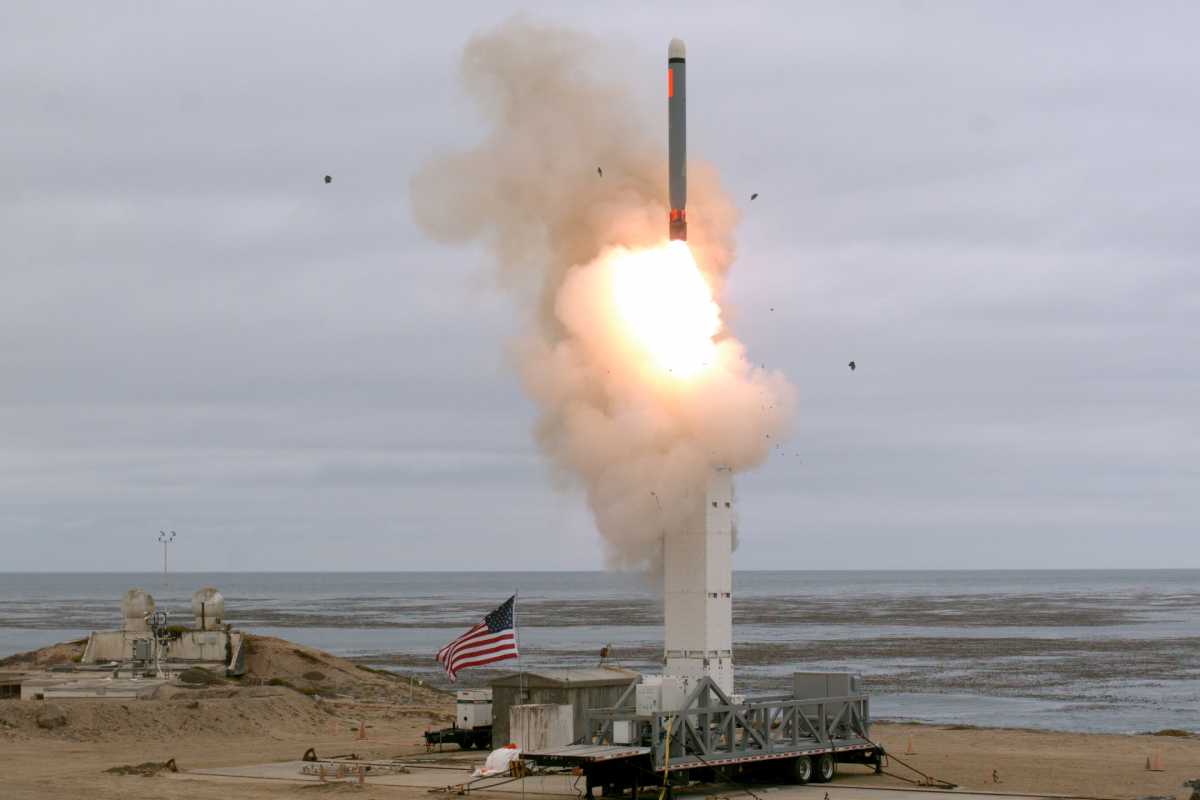 New intermediate-range weapons, Esper said, will serve as both “a prudent response to Russia’s actions and as part of the Joint Force’s broader portfolio of conventional strike options.”

The INF Treaty required the United States and Russia to eliminate permanently all their nuclear and conventional ground-launched ballistic and cruise missiles with ranges of 500 to 5,500 kilometers.

NATO Secretary-General Jens Stoltenberg has stated that the alliance has no intention of deploying new nuclear-tipped missiles in Europe. While this is reassuring, the United States does not need to deploy them with conventional warheads either. It already possesses an enormous capacity for precise, long-range, conventional strike in the European theater through other means, to which new intermediate-range missiles would add little.

The United States maintains a large and unrivaled arsenal of sea- and air-launched weapons due to the priority it places on these platforms. The U.S. Navy possesses a stock of roughly 4,000 UGM/RGM-109E Tomahawk cruise missiles, which have a 1,600-kilometer range and advanced multi-mode guidance system. The Pentagon’s fiscal year 2020 budget submission would fund an initial 90 Tomahawks in the new Block V variant, with full-rate production expected to continue into the 2020s. A single Ohio-class guided-missile submarine (SSGN) can launch over 150 Tomahawks, with other submarines, cruisers, and destroyers able to carry dozens each.

Four Tomahawk-capable guided-missile destroyers have a permanent European assignment in Rota, Spain, while submarines regularly patrol European waters under Task Force 69 of the Sixth Fleet. Numerous additional ships would be able to move quickly to the area in a crisis. A key US ally, the United Kingdom, also operates the Tomahawk on its attack submarines.

In addition to its naval strike assets, the United States boasts an enormous arsenal of air-launched cruise missiles. B-1B, B-2A, and B-52G bombers can carry the stealthy AGM-158A Joint Air-to-Surface Standoff Missile (JASSM), with an estimated range of 370 km, and all three are also planned to carry the AGM-158B variant with a range in excess of 900 km. This modern family of missiles, which utilize a combined GPS/INS and terminal infrared imaging guidance system, is very precise and can be carried in large numbers – up to two by an F-15E strike aircraft, and up to 24 by a single B-1B bomber. Just 20 of these bombers, each carrying a full loadout of missiles, could hit more targets in a single mission than all of the intermediate-range missile units deployed in Europe in 1987. Production of both versions of the JASSM is still ongoing towards an eventual combined procurement goal of over 5,000 rounds. Beyond its own military, the U.S. has also provided for sales of the JASSM to its European allies Finland and Poland.

Finally, the U.S. fields an enormous arsenal of unpowered precision-guided munitions (PGMs). Production of the Joint Direct Attack Munition GPS-guided bomb kit is planned for nearly 45,000 units in fiscal year 2020, a record quantity spurred partly by heavy use in the fight against ISIS. Production of the gliding Small Diameter Bomb in 2020 is set for over 7,000. These numbers dwarf any likely future procurement of intermediate-range missiles. Moreover, they can be delivered at similar ranges by a variety of existing platforms.

When two squadrons flying the F-35A become operational in the UK in 2021, there will be seven U.S. squadrons (a USAF fighter squadron typically consists of 18-24 aircraft) in the European theater capable of employing air-to-ground PGMs. U.S. long-range bombers can attack targets in Europe with tanker support, while regular rotations of other combat aircraft have become common since the creation of the European Deterrence Initiative in 2014. The advent of any major conflict would bring the assets of NATO allies to bear along with a greatly reinforced U.S. air presence. Recently unveiled plans call for NATO to field thirty squadrons of aircraft within a month, part of a broader effort to increase the alliance’s strike power.

It is true that air- and sea-based weapons could be vulnerable to advancing Russian defenses. However, the missiles now under development would not be immune to counterattack either. In the 1980s, the BGM-109G intermediate-range cruise missile launchers were not anticipated to survive long if war broke out – their relatively few basing sites were easy to identify, and the missile launchers themselves, while ostensibly mobile, required a logistics train that made them vulnerable in the open. There is little reason to assume that the same limitations would not apply in a future conflict with Russia. If a ground-based strike option is truly needed, the U.S. is already developing a tactical ballistic missile, the Precision Strike Missile, which will provide this capability while remaining within the former 500-kilometer range limit of the INF Treaty.

Another common argument in defense of INF-range missiles is that they complicate the enemy’s planning and provide “strategic depth”, forcing adversaries to expend additional resources locating and attacking them. However, this is only true if there is a sufficient variety of basing locations. No European country has yet agreed to host intermediate-range missiles, with some key U.S. allies stating that the agreement of all NATO members would be a necessary prerequisite.

Even proponents of withdrawal from the INF Treaty have admitted that the lack of military necessity for the missiles makes the case for European deployment shaky. For this reason, they have been primarily sold as necessary to counter Chinese missiles in Asia. However, here too they would be hamstrung by a lack of allies willing to base them and their disadvantages in comparison to the highly mobile, capable, and prolific long-range strike capabilities of other platforms.

In short, while it is true that the deployment of intermediate-range missiles to Europe would give the United States a new conventional strike option, their military value compared to existing options is minimal. As such, the limited benefits they could provide hardly seem to justify the financial, political, and strategic costs that would ensue from their deployment.

Creating an Opportunity to Withdraw U.S. Nuclear Weapons From Europe