– George Stephanopolous
Host of ABC's This Week
January 1, 2005
How Can Norway, Sweden and Switzerland Stay Engaged with the TPNW?

Authored by Alicia Sanders-Zakre on February 1, 2019

Reports commissioned by Norway, Sweden* and Switzerland each recommended against signing and ratifying the 2017 Treaty on the Prohibition of Nuclear Weapons (TPNW). These government-mandated inquiries may advise against ratification, but that should not be the end of each country’s engagement with the TPNW.

The reports requested by Norway, Sweden and Switzerland rejected ratification of the TPNW in part because of a concern that ratifying would prevent them from continuing to play a bridge-building role between nuclear-weapon states and non-nuclear-weapon states, largely due to nuclear-weapon states’ and NATO members’ hostility towards the treaty. The Swiss and Norwegian reports were written by employees of the federal government, while the Swedish report was written by an outside researcher.

Norway, Sweden, and Switzerland are obligated to advance disarmament as parties to the nuclear Nonproliferation Treaty (NPT) and each has a positive track record of engaging with both the nuclear-weapon states and TPNW supporters to do so. With nuclear disarmament at an impasse, bridging the gap between these two groups of states is critical. Complete rejection of the TPNW only makes this task more difficult.

These three states can continue to act as “disarmament bridge builders” by observing TPNW meetings, re-considering joining at a later date and actively pursuing disarmament steps that complement the TPNW and the NPT. These three states are in a unique position because they maintain close relationships with nuclear-weapon states and have engaged with the movement focusing on the humanitarian consequences of nuclear weapons which led to the TPNW. Sweden and Switzerland participated in the TPNW negotiations and voted for its adoption while Norway hosted one of the conferences on the humanitarian impact of nuclear weapons that preceded the TPNW, although it boycotted the treaty negotiations alongside almost all other NATO members and all nuclear-weapon states. 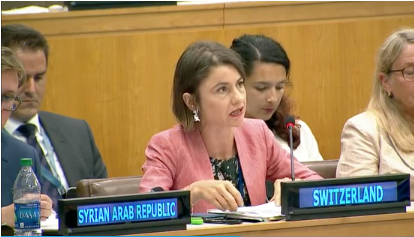 Nuclear-weapon states have campaigned against the treaty from its inception. France, the United Kingdom and the United States, along with some NATO members held a press conference on the first day of TPNW negotiations outside of the negotiating room to express their opposition. Such unnecessarily antagonistic actions towards a good-faith effort to promote disarmament are neither helpful nor in line with nuclear-weapon states’ own NPT obligations to pursue disarmament. Nuclear-weapon states and NATO members certainly should not chastise allies who join a treaty they believe can reinforce the norm against using nuclear weapons and advance disarmament.

The reports all expressed concern about damaging ties with NATO by joining the treaty. Tarnishing the relationship, the reports argue, would harm defense coordination and also could impede the states’ ability to facilitate disarmament discussions between NATO members and other non-nuclear-weapon states.

The Norwegian report argued that NATO’s opposition to the treaty would prohibit its accession to the TPNW, citing the contradiction between key treaty prohibitions and NATO obligations. The Norwegian report also emphasized the negative impact of TPNW accession for Norway’s mediating role on disarmament within NATO. “Placing itself outside the NATO bodies where issues relating to nuclear weapons are discussed would not be an effective way for Norway to promote disarmament.”

Although Sweden is not currently a member of NATO, Sweden’s report brought up the concern that joining the treaty would inhibit possible future NATO accession. The Swedish report also referenced the expected political costs it would incur by signing the treaty.

“Accession to the Treaty at this stage could, in addition, make it more, rather than less, difficult for many countries, including Sweden, to play a facilitating role in disarmament efforts…..Swedish accession would, not least in view of the nuclear umbrella issue, necessarily be perceived as a fundamental criticism of the strategic doctrine subscribed to by almost all of Sweden’s neighbours and partners in NATO.”

The Swiss report raised concerns that pursing TPNW ratification would create disagreement among regional countries, many of whom are NATO members. “At least Switzerland's security policy dialogue with various states in its geographical region is likely to be adversely affected through accession to the TPNW. The large majority of the European states is critical of the treaty.”

Switzerland also raised concerns about advancing disarmament when in opposition to nuclear-weapon states and NATO members on the doctrine of nuclear deterrence. “As the declared goal of the TPNW is to delegitimise nuclear weapons, TPNW membership would have to be combined with a firm stance against the nuclear deterrence doctrine (e.g. in the context of meetings of states parties). Switzerland would pursue a position in clear opposition to the nuclear weapon states and their allies, although it has always advocated disarmament with and not against these states.”

However, if Norway, Sweden and Switzerland want to continue to advocate for progress on disarmament by working with both nuclear-weapon states and TPNW supporters, they must continue to engage with the TPNW, even as non-states-parties, and advance other disarmament steps in the meantime.

All three of these countries should continue to track the implementation of the treaty, as the Swiss report recommended, and reconsider joining at a later date once it is more clear how some key provisions that raised red flags will be interpreted. This approach would be especially judicious since each of the reports mentioned the difficulty in determining the full scope of implications of joining the treaty at such an early stage.

Furthermore, Norway, Sweden and Switzerland would be better positioned to address some of the concerns about the TPNW identified in their inquiries if they participate as observers at the treaty’s meetings of states parties and review conferences.

For example, all three countries expressed regret in their reports that the TPNW does not explicitly require states-parties to adopt an additional protocol, the level of safeguards recommended by the International Atomic Energy Agency (IAEA). Instead, the treaty requires, in article 3, that states maintain their current safeguards arrangements or adopt a comprehensive safeguards agreement with the IAEA if they do not already have one in place. NPT states-parties are also obligated only to adopt a comprehensive safeguards agreement at minimum, although the IAEA recommends states negotiate an additional protocol agreement. With 134 states having ratified additional protocols, this more intrusive inspections mechanism is becoming the international norm.

As observers to the treaty, Norway, Sweden and Switzerland would be better placed to raise the importance of the additional protocol in strengthening the safeguards regime through statements and working papers. While only states-parties can actually propose amendments to the TPNW, as observers, Norway, Sweden and Switzerland could encourage a state-party to introduce one raising the safeguards requirements to include the additional protocol.

The Swiss report actually recommends attending the first meeting of states-parties as an observer, which would be a positive step that demonstrates Switzerland’s willingness to remain in engaged with TPNW states. The Swedish report claims that observing “sends a political signal that must be carefully considered,” implying that there may be negative ramifications to observing, while the Norwegian report does not mention observing as an option. Both states, however, should strongly consider this option.

It is also worth noting that it still remains to be seen how each country will decide to implement the inquiries’ recommendations. The Swiss legislature has already rejected the executive branch’s report. In December 2018, the Swiss parliament passed Motion 17.4241, which calls on the Swiss executive branch (the Federal Council) to sign and ratify the TPNW as soon as possible, within two years at the latest.

But should Norway, Sweden, and Switzerland follow the reports’ recommendations and remain non-states-parties to the TPNW, it is essential that they continue to engage with the TPNW and its supporters and work to promote complementary disarmament measures in order to act as disarmament bridge-builders. —ALICIA SANDERS-ZAKRE

*The author has only been able to read the 30-page executive summary of the Swedish report, because the rest of the report is in Swedish.

This post has been updated to clarify that the reports were commissioned by the governments of Norway, Sweden and Switzerland but not necessarily written by each government and that each report provides recommendations, not a mandate, for action.