We are just three weeks into the new year, and with your generous support, our team is already deeply engaged on efforts to reduce the risk posed by nuclear weapons and other security challenges of 2019:

And with the arrival of a new Congress, our staff and Board Chairman, Tom Countryman, are already busy meeting and briefing new staff and members on these and other issues.

These are big challenges. We appreciate your interest and support. Please consider asking a friend or colleague to join the Association, invite them to sign up for our issue alerts, or make a donation to support these efforts.

Contributions Up Again in 2018. Thank You!

Thanks to your generous support in 2018, the Arms Control Association begins the new year stronger than ever. With more people recognizing the importance of our efforts and seeing the value we place on providing informed, substantive content, individual contributions are up significantly.

Your gifts helped us surpass our end of the year goal of $50,000! Together, your support helped raise $69,000 during our year-end push in December.

Overall, individual contributions in 2018 rose over the previous year by 13 percent. The size our average gift and the number of members has grown as well, including individuals making a gift at the Contributing ($125+) and Leadership Circle ($500+) Member levels.

Each new member and donation empowers us to make a difference. Thank you for making a commitment to effective arms control in 2019 and beyond.

The 2019 Annual Meeting of the Arms Control Association will be held on April 15 at a new location: the Washington Court Hotel at 525 New Jersey Ave. NW in Washington, DC.

The new location will be able to accommodate the growing audience for our largest gathering of the year. Special rates for overnight guests for the conference will be available. A post-meeting reception for members and guests will be held in the late afternoon.

Look for registration information and hotel rates for attendees online and, if you are an Arms Control Association member, in your mailbox, very soon!

A group of 4,000 anonymous Google employees opposing the company's work on a Pentagon project using artificial intelligence (AI), which could be used to improve drone targeting, was voted as the Arms Control Persons of the Year for 2018.

Due to the employees’ actions, Google ended its work on Project Maven when the contract expired and announced it would focus on “socially beneficial” AI and avoid work that causes “overall harm.”

More than 1,200 individuals from over 70 countries voted in this year’s online contest. Nine individuals and groups were nominated by the staff and board of the Arms Control Association.

The Arms Control Association will continue to report on and engage in the international deliberations on lethal autonomous weapons in the age of AI, including encouraging multilateral negotiations on a legally-binding instrument to ensure meaningful human control over weapons of war and decisions to employ the lethal use of force. 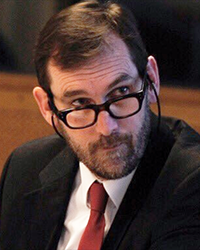 After a thorough search produced some very worthy candidates, we are pleased to announce that Greg Webb has joined us (again) as our editor-in-chief starting on Jan. 16.

Greg’s first job in Washington in 1989 was an assistant editor for Arms Control Today, and since then he has continued to work in the arms control and journalism field as a nongovernmental analyst, a journalist and public affairs specialist. He served as the editor for the Arms Control Reporter (where he worked with former Arms Control Association board member Randall Forsberg), as the deputy director for the Nuclear Policy Program at the Carnegie Endowment for International Peace, and later as the lead editor and a reporter for Global Security Newswire. He most recently worked as a public affairs and information officer at the International Atomic Energy Agency.

His depth and familiarity with the field, diverse network of contacts, strong journalism foundation, and his shared commitment to the mission of the organization and his commitment to maintaining the high-quality standards we strive for with Arms Control Today should serve us all very well in the years ahead.