Authored by Kelsey Davenport and Alicia Sanders-Zakre on October 20, 2017

As expected, President Donald Trump announced Oct. 13 he would not issue a certification to Congress required by U.S. law that is tied to the nuclear deal with Iran, known as the Joint Comprehensive Plan of Action (JCPOA).

While withholding certification does not, by itself, violate the 2015 multilateral nuclear deal and Trump said the United States is staying in the agreement for now, his proposed policy toward the deal sets the United States on a course to violate the accord, further isolate Washington from critical European allies, and possibly lead to the unraveling of the agreement that has blocked Iran’s pathway to a nuclear bomb. 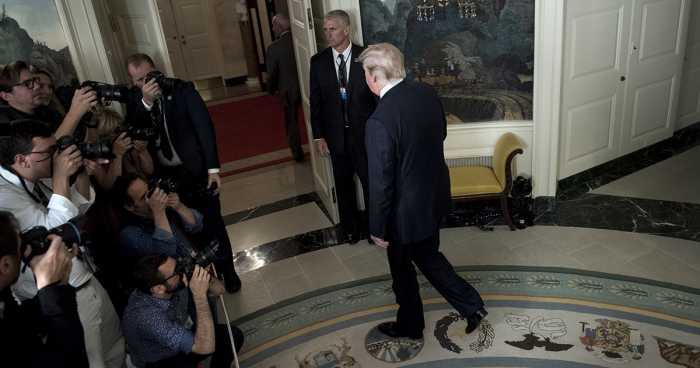 Trump justified withholding certification by saying that the sanctions relief Iran receives is not “proportionate" to the actions Iran is taking under the agreement, a subjective assessment for which he cited Iran’s malign activity in the region as a partial cause. The proportionality of sanctions relief is one of the four determinations that comprise the certification. The other three relate to Iran’s compliance with the accord and assessing that sanctions relief is in the national security interested of the United States. Members of Trump’s cabinet conceded Iran’s compliance and the national security value of the accord within the past month.

Trump directed his administration to work “with Congress and our allies to address the deal’s many serious flaws so that the Iranian regime can never threaten the world with nuclear weapons.” Specifically, Trump called attention to the “sunset clauses that, in just a few years, will eliminate some restrictions on Iran’s nuclear program” and the deal’s failure to address ballistic missiles.

Trump said he supported Congressional efforts to “make all restrictions on Iran’s nuclear activity permanent under U.S. law.” Trump said he would terminate the accord if Congress failed to find a path forward.

Pursing this approach sets up Washington to violate the accord by attempting to unilaterally alter its limits. (See below for details.) The policy stands in sharp contrast with Washington’s P5+1 partners (EU, China, France, Germany, Russia, and the United Kingdom), all of whom support the accord and reject renegotiation.

Trump’s approach was immediately criticized by Federica Mogherini, EU foreign policy chief. Speaking to press shortly after Trump’s speech Oct. 13, Mogherini said that the agreement is multilateral and it is “not up to a single country to terminate it.”

Mogherini reiterated that there have been “no violations” of the deal by any party and that the international community cannot afford to dismantle a nuclear that is “working and delivering.” She said that the EU “has clearly indicated that the deal is, and will, continue to be in place.”

Iranian President Hassan Rouhani echoed Mogherini’s commitment to continue implementing the nuclear deal, but warned that Iran will only be pushed so far. He said Oct. 13 that Iran “will not be the first to withdraw from the deal, but if its rights and interests in the deal are not respected, it will stop implementing all its commitments and will resume its peaceful nuclear program without any restrictions.” He said that Washington’s actions prove that the United States is “not a reliable negotiating partner.”

International Atomic Energy Agency Director General Yukiya Amano also released a statement Oct. 13, noting that the agency  “has had access to all locations it needed to visit” and all nuclear related commitments are being implemented.

While Amano did not directly reference the U.S. decision to withhold certification or the speech, his remarks appeared to counter a claim Trump made in his remarks that Iran had “intimidated international inspectors into not using the full inspection authorities that the agreement calls for.”—KELSEY DAVENPORT, director for nonproliferation policy, with ALICIA SANDERS-ZAKRE, program and policy research assistant

Senator Bob Corker (R-Tenn.)  released a factsheet Oct. 13 outlining a legislative framework for “Fixing the Iran Deal,” that targets areas that Trump labeled flaws in his speech, including sunsets and verification.

While Corker has yet to release a draft bill, the factsheet points toward legislation that would unilaterally renegotiate the agreement’s terms and coerce Iran to abide by additional limits under threat of reimposition of U.S. sanctions—­a clear violation of the deal.

The factsheet says that U.S. sanctions waived under the deal will snapback automatically if Iran’s nuclear weapons “breakout” time, commonly defined as the time it would take Iran to amass enough weapons-grade fissile material for one bomb, drops to less than one year.

For the first 10 years of the nuclear deal, the combination of limits on Iran’s uranium enrichment capacity and stockpile of enriched uranium holds Iran to a 12-month breakout time. Limits expire between 10-15 years, during which time Iran is permitted to take certain steps to expand uranium enrichment. The breakout would likely drop below 12 months at that point, although significant restrictions and monitoring mechanisms would still serve as barriers to a nuclear weapon.

Corker’s factsheet describes this "fix" on breakout as “ridding the JPCOA of sunset provisions as they apply to U.S. sanctions.” If the legislation is consistent with the parameters of the factsheet, the United States would be seeking to coerce Iran into indefinitely extending now time-limited restrictions in the deal under the threat of reimposing nuclear-related sanctions.

Corker and Sen. Lindsey Graham have, in interviews with reporters this week, also suggested that his legislation would automatically reimpose sanctions based on Iran’s ballistic missile program, which is not proscribed by the JCPOA.

Threatening to sanction Iran for engaging in peaceful nuclear activities that are permitted under the agreement in the out years, or adding restrictions on its ballistic missile program, would violate the agreement, which requires Washington to “implement this JCPOA in good faith and in a constructive atmosphere” and “make every effort to support the successful implementation of this JCPOA.” (See Section C of the JCPOA.)

In addition to directly violating the JCPOA, the United States is required to seek termination of the statutory sanctions waived under the deal eight years from adoption day, October 2023. If the United States intends to use the threat of automatic re-imposition of sanctions to extend limits that expire by the deal, Washington will not be able to make a good faith effort to terminate sanctions.

If the legislation sets up the United States to violate the deal, either immediately or in the future, Washington risks Iran resuming troublesome nuclear activities and widening the schism with key European allies. It is critical that Congress consider the high cost of violating the deal and refrain from legislative efforts that unilaterally expand or alter the terms of the agreement.

A group of 25 former foreign ministers urged Congress to “uphold the agreement, and not to take any unilateral action that seeks to expand, alter or renegotiate the terms of the JCPOA.”

The Oct. 18 letter, addressed to Congressional Leadership in both the House and the Senate, mentioned international support for the nuclear deal and detailed the risks of losing it. The former ministers said that a U.S. withdrawal would also “give Iran justification to kick out inspectors and restart its nuclear program” and “create a rift in the transatlantic alliance, threatening one of the pillars of international stability.”

The group, which included former U.S. Secretary of State Madeline Albright, former Israeli Foreign Minister Shlomo Ben-Ami, and former Swedish Foreign Minister and Deputy Secretary-General of the UN Jan Eliasson, further noted that “the world counts on the United States to live up to its commitments. If the United States loses its credibility, the consequences for its security, and the security of its allies, would be disastrous.”

After Trump’s announcement that he would withhold certification of the Iran deal, and call on Congress to “fix” the agreement, Washington’s P5+1 partners strongly reiterated support for the JCPOA and called for its full implementation by all parties.

“We stand committed to the JCPOA and its full implementation by all sides. Preserving the JCPOA is in our shared national security interest.... Therefore, we encourage the U.S. Administration and Congress to consider the implications to the security of the U.S. and its allies before taking any steps that might undermine the JCPOA.”

Russia’s Foreign Ministry issued a statement Oct. 13 expressing “regret” over Trump’s decision to decertify. The statement noted that “Russia remains committed to the JCPOA and has a stake in preserving it, and will continue fulfilling its obligations under it. We are calling on all the other signatories to follow suit.”

The Chinese Foreign Ministry spokesperson said Oct. 13 that “the JCPOA has played a key role in upholding international nuclear non-proliferation regime and the peace and stability of the Middle East region. We hope that all relevant parties will continue to uphold and implement the JCPOA.”

For more international statements on the JCPOA, click here.

Many members of Congress also objected to Trump’s decertification of Iran and relayed their support for the agreement in statements following his speech.

Among those calling for keeping the JCPOA were previous deal skeptics, including Democratic Senators Ben Cardin (Md.) and Chuck Schumer (N.Y.).

“At a time when the world should be united in focusing on Iran’s bad actions, instead the president has opened up the United States to international criticism and challenge. Not even one year into his Presidency, this is one of the most dangerous and consequential decisions the president has made imperiling U.S. national security.... It is now up to Congress to show the world that there is bipartisan support for the United States to uphold its commitments, including the JCPOA,” Cardin said.

“President Trump’s own Secretary of Defense and Chairman of the Joint Chiefs of Staff, Generals Mattis and Dunford, both said that it’s in our national security interest to keep the JCPOA in place and I agree. I believe Congress, both Democrats and Republicans, will heed their recommendation,” said Schumer.

Democratic House and Senate leadership cited the numerous negative national security consequences of ditching the JCPOA as reasons to keep it.

“Pulling out of the Agreement would only empower Iran’s hardliners and weaken America’s standing with our allies—allies we depend on to face down growing threats in other parts of the world, like a nuclear-armed North Korea.... Make no mistake, President Trump’s bad faith move alienates the United States and makes other countries—friend and foe alike—less likely to trust America’s word in the future. He alone will own the results,” said Senator Dick Durbin (D-Ill.).

“It is the policy of the United States that a nuclear-armed Iran—now or at any time in the future—is unacceptable. It is appropriate for the Congress to act to support and encourage international efforts, in conjunction with our European allies, to further that policy. However, as long as Iran is in compliance, such efforts should not violate the terms of the JCPOA.... Unfortunately, today’s action may make confronting Iran’s nuclear ambitions and other threatening behaviors more difficult," stated Congressman Steny Hoyer (D-Md.).

Senator Tim Kaine (D-Va.) was one of many to highlight the role that his fellow members of Congress must now play to prevent a national security catastrophe.

“This reckless decision damages the credibility of the United States, weakens our alliances, and could hamper our ability to counter the nuclear threat posed by North Korea.  Since President Trump refuses to be the adult in the room when it comes to foreign policy, the burden is now on Congress to protect an agreement that has made the world safer by preventing a nuclear Iran,” Kaine said.