Authored by Elizabeth Philipp on December 10, 2015

For a propaganda state reliant on a state-sanctioned image to indoctrinate its people and promote a certain reputation globally, a successful missile test is an event to be photographed and celebrated in the state-run news. Today, the North Korean leader Kim Jong Un announced that his state has developed a hydrogen bomb, a new claim that has elicited skepticism from experts. This decree, like its many other public pronouncements and demonstrations of military equipment, does not necessarily reflect North Korea’s true current capability. 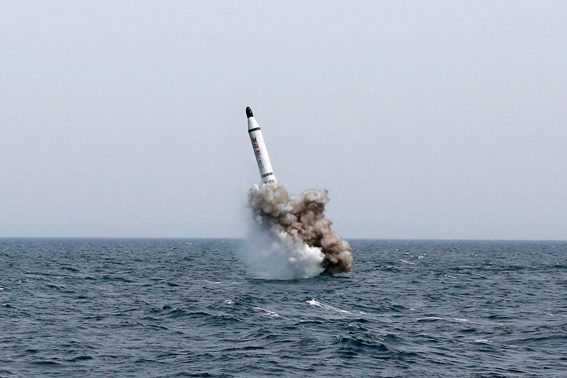 Pyongyang meticulously crafts its own nuclear narrative by selective truth telling. On Nov. 30 North Korea once again tested a submarine-launched ballistic missile (SLBM). Boastful news, however, did not come from Pyongyang because the test was a failure. But without a diplomatic intervention, North Korea could eventually perfect this capability, posing a serious threat to the region, including U.S. allies and military bases.

The recent launch was another in a series of tests, part of an apparent research and development effort by North Korea to hone a sea-based nuclear capability, including several tests since 2014. On May 20, a statement made by a government official through the Korean Central News Agency (KCNA), the North Korean state-run media, reported a successful underwater test of an SLBM from a “strategic submarine.” It was more likely an ejection test, however, conducted from a submerged barge rather than from a submarine.

South Korean intelligence reports the latest underwater missile test, which failed to clear the surface, was fired from a submarine. However, other analysts report that it was again fired from a submerged barge, a test bed for an ejection test rather than a true SLBM launch test. No matter the launch point, the takeaway is that North Korea is still diligently working to augment its nuclear delivery capability.

The general value of a sea-based nuclear deterrent is to provide a state with a survivable second strike capability. But is a North Korean SLBM a reliable delivery vehicle for a nuclear weapon? North Korea claims to maintain 70 submarines. While it is formidable in size, Pyongyang’s naval force is comprised of antiques. The Korean People’s Army submarine fleet patrols close to the Korean territory. It does not have long-range mission experience, and the conventionally-powered submarines are easily detectable.

Whether sea- or ground-launched, a ballistic missile necessitates a miniaturized nuclear device, compact enough to be carried by the missile over hundreds or thousands of miles. With its three nuclear detonations to date, North Korea has yet to definitively demonstrate that it has achieved miniaturization. Pyongyang has claimed a miniaturization capability since its most recent nuclear test in 2013, and experts believe North Korea can achieve this status if it has not yet. In a crisis scenario, North Korea could attempt to deliver a crude nuclear device to a regional target. However, given limited the nuclear testing, it could not be counted on to be reliable.

Today the outlook is bleak, but a diplomatic opportunity for the two Koreas is on the horizon. On Dec.11, the two Koreas are slated to hold another meeting, this time at the Vice-Ministerial level, at the jointly-run Kaesong Industrial Complex in North Korea. The talks follow an August incident on the heavily militarized border in which two South Korean soldiers were maimed by North Korean landmines. While a meeting at this level is not a diplomatic breakthrough, it is another opportunity for progress. In October, the states followed through with reunions of families separated by the Korean War, an event often held as a bargaining chip by North Korea and subject to cancellation. 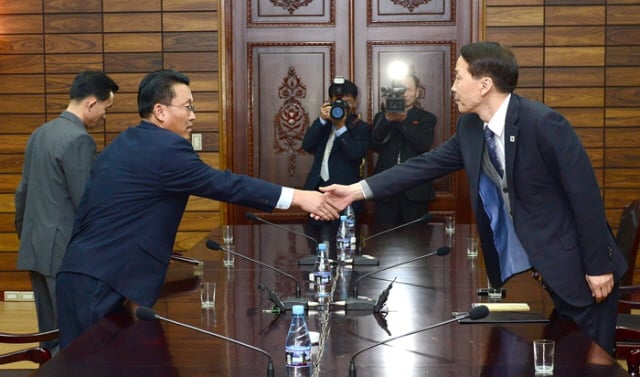 Provided the meeting does take place this month, what would deem it successful? Pyongyang has repeatedly called for the 1953 Korean War armistice agreement to be replaced by a formal peace treaty. Seoul, alongside its security guarantor the United States, has called for an end to North Korea’s nuclear program and proliferation activities. North and South Korea have not held talks regarding the North’s nuclear program since the end of the so called six-party talks in 2007.

Negotiations yielding further family reunions and nongovernmental exchanges are useful for building confidence between the two countries, but leave the critical issues unaddressed. On Dec.11, Seoul and Pyongyang should seize the opportunity for a frank discussion on the security status of their region. It could be an opening for future sincere and substantive negotiations to reduce hostility and halt military buildup on the Korean peninsula. Further agreement between the two parties to deescalate tensions and promote bilateral relations is sure to make headlines in North Korea.