Authored by Elizabeth Philipp on October 23, 2015

International relations with North Korea have been marked by provocations, off-and-on diplomatic engagement, and the threat of military conflict for decades. The threats posed by North Korea’s nuclear and missile programs came back into the spotlight this fall with talk from North Korea that it would soon conduct a fourth satellite launch, which has not been delivered upon to date, the highly anticipated military parade in honor of the Korean Workers’ Party 70th anniversary, and reports that Pyongyang is making preparations for a fourth nuclear test explosion.

It is Pyongyang itself that draws attention to these events through its international news media in an attempt to highlight to the world its nuclear status. North Korea continues to substantiate its rhetoric with actions that steadily advance its nuclear and missile programs. On President Barack Obama’s watch, North Korea has failed to change course and its proliferation record has worsened—all of which highlights the need for a renewed strategic approach for engaging with Pyongyang to reduce the growing dangers it poses to its neighbors and the world.

The expansion of the Sohae satellite launch site used to launch rockets, coupled with demonstration of an untested, but purportedly nuclear-capable, KN-08 intercontinental ballistic missile (ICBM), presents the carefully constructed image that North Korea is working diligently towards a nuclear-armed ICBM. North Korea equipped with a nuclear-armed ICBM poses a potential threat to U.S. territory. Although its rocket designs capable of reaching the United States have not been tested as missiles, North Korea’s persistent efforts should not be ignored.

Perhaps of more immediate concern are North Korea’s less visible efforts, including ongoing work to develop a submarine-launched ballistic missile (SLBM) capability through testing at Sinpo, improvements at the Punggye-ri nuclear test site, and ongoing expansion of its enrichment and reprocessing facilities, which provide Pyongyang with a growing and diversified stockpile of fissile material for nuclear weapons. Arming its fleet of submarines would increase Pyongyang’s nuclear strike capability by shortening the required missile range, and thereby reducing strike warning time and improving accuracy. Take heed: a North Korea equipped with nuclear-armed SLBMs poses a significant and imminent threat to the region, including U.S. military bases and vessels.

The international community has a choice: engage with North Korea or watch it improve its ballistic missile and nuclear weapons programs. 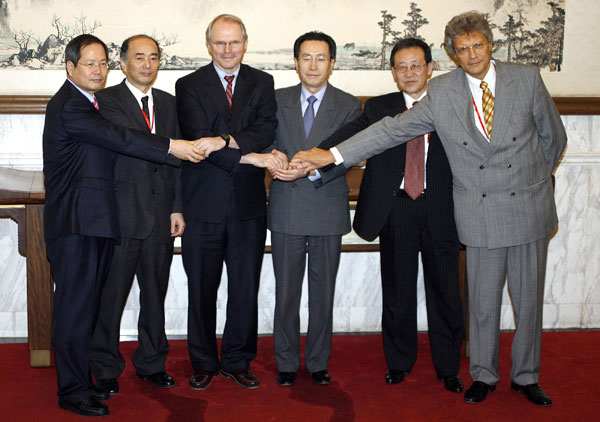 The current U.S. approach to negotiations with North Korea, setting the ultimate objective of denuclearization as a precondition to talks, is a failure and has inhibited dialogue. The six-party talks between the Koreas, United States, China, Japan, and Russia have remained inactive since 2008 and bilateral discussions between Washington and Pyongyang have been dormant since 2012.

President Obama has correctly emphasized that the United States will never accept North Korea as a nuclear-weapon state. The Obama administration has maintained a policy of “strategic patience,” a policy under which the United States exerts coercive pressure on North Korea through escalating sanctions, and will not negotiate with North Korea unless Pyongyang takes meaningful action on denuclearization and agrees to put dismantlement of its nuclear arsenal on the table.

Washington does not have the luxury of being “patient” and insisting upon unrealistic preconditions that demand Pyongyang agree to the end-state at the outset of negotiations. Shifting the U.S. approach to renewed talks unburdened by harsh preconditions, however, does not mean the United States is abandoning the denuclearization goal or is failing to hold North Korea accountable for its earlier pledges.

According to the six parties, stability will only ultimately be achieved through the complete and verifiable denuclearization of the Korean peninsula and an end to North Korean ballistic missile development and proliferation. To expect substantial steps toward this goal before resuming talks with North Korea would be putting the cart before the horse.

To Pyongyang, the goal of stability means a peace treaty and an end to the Korean War Armistice Agreement. To outline this view, the North Korean Foreign Ministry released a statement through the state-run Korean Central News Agency, urging the United States not to “groundlessly shun” the conclusion of a peace treaty on the Korean peninsula. In Pyongyang’s view, past negotiations that put the issue of denuclearization as the first priority “proved futile” due to a lack of implementation and perceived persistently hostile U.S. policy towards North Korea. To end the cycle of confrontation and tension, Pyongyang maintains it is necessary to replace the armistice agreement with a peace treaty “before anything else.”

In response to North Korean provocations, the United Nations Security Council has serially issued resolutions calling for North Korea to return to the six-party talks. The six-party talks, however, are just one diplomatic forum. According to Ambassador Robert Gallucci, former chief negotiator with North Korea, the modality of negotiations is less important than the participation of the United States and North Korea. The critical elements to a negotiation will be bilateral engagement, coupled with consultation with stakeholders like South Korea, Japan, and China, he said in his testimony at a Senate Foreign Relations Committee hearing on Oct. 7.

Highlighting the efficacy of bilateral engagement, Gallucci said “When you have six­party talks, nothing happens with six parties,” but breakthroughs happen “when two parties get together.” Given that when negotiating with North Korea, diplomatic progress occurs incrementally and out of the large group setting, perhaps it would be beneficial to take a tiered approach to talks with North Korea.

In a tiered approach to negotiations with North Korea, Washington and Pyongyang should be prepared to undertake the diplomatic heavy lifting in bilateral negotiations. North Korea has long expressed a desire to negotiate directly with the United States. Hope for a diplomatic breakthrough rests on this bilateral level. The next level of consultation in a tiered approach is the four parties, adding South Korea and China, who have the most leverage on Pyongyang. The six-party talks should serve as a setting for a tiered diplomacy approach, and ideally, a denuclearization agreement would be reached in this forum.

China, South Korea, and the United States have been the most proactive in dealing with the North Korean nuclear threat, while Japan and Russia have been less energetic. Japan continues to be seized with the issue of past North Korean abductions of Japanese citizens, while Russia’s lower level of economic engagement and inability to commence joint development projects with North Korea has limited its leverage.

In September, Chinese Foreign Minister Wang Yi called for a resumption of negotiations with North Korea. China is “ready to work together with all other parties and the international community to make unremitting efforts and new contribution to this arduous and noble mission” of promoting the denuclearization and maintaining peace on the Korean Peninsula. Yi also echoed the North Korean desire to conclude a peace treaty and “replace the armistice with a permanent peace regime.” With China as North Korea’s only patron and economic buffer against sanctions, in signaling China’s preparedness to cooperate, Yi’s remarks are significant.

There is still utility to the six-party talks. These parties still have the greatest stake in the stability of the Korean peninsula and status of the North Korean threat. The international community has the greatest chance of success in capitalizing on even mild rapport between these parties and North Korea. There will be no deus ex machina to easily solve the North Korean issue, therefore, the United States should be strategic and implement a tiered approach.

The essential element missing from the United States’ North Korea policy is engagement independent of onerous preconditions. In resuming talks with North Korea, the paramount goal should be normalizing relations and working towards peace and stability on the peninsula. The outcome of past negotiation efforts show that the steep preconditions of denuclearization does not work. Rather than insist that North Korea take action to denuclearize before resuming talks, the United States and other key parties should be prepared to resume dialogue if Pyongyang agrees to engage in negotiations on its nuclear and missile programs.

As witnessed in the nuclear negotiations with Iran, which took more than two years, even successful talks addressing sensitive nuclear technology are often exacting and uncertain. Diplomacy, however, can prevail even when dealing with states with clandestine nuclear programs, and a history of noncompliance, deeply entwined with the governing regime. With fifteen months left in the current administration, it is not too late to begin tempering relations with North Korea and thinking about a new strategy for the next administration. Goals for negotiations must be kept separate from the preconditions, or else parties risk diplomatic failure before giving the diplomatic process a renewed opportunity.