Authored by Elizabeth Philipp on October 5, 2015

With the 70th anniversary of the founding of the Worker’s Party of Korea approaching on Oct. 10, the director of North Korea’s National Aerospace Development Administration (NADA) lauded his country’s “shining achievements” in space development in an interview with the state-run Korean Central News Agency (KCNA) on Sept. 14 and raised the possibility of another satellite launch in the near future.

The unnamed director reported that North Korea is at a “final phase” in the development of a new earth observation satellite, a “peaceful project” pursuant to improving the people of North Korea’s standard of living. He concluded by alluding to an upcoming launch: that the world will see a “series of satellites of Songun Korea soaring into the sky.” Songun refers to North Korea’s “military first” policy.

The following day, KCNA relayed a far less peaceful message from the director of the Atomic Energy Institute of North Korea: all nuclear facilities at Yongbyon, including its uranium-enrichment plant and 5 MW graphite-moderated reactor, were operating normally, building on an April 2013 announcement expressing an intention to restart the reactor. International news media were quick to seize on the announcement, which came coupled with the threat that the DPRK is “fully ready” to use nuclear weapons to “cope” with hostile forces at any time; hostile forces which include the United States.

Developments in North Korea’s nuclear weapons and ballistic missile programs have been a source of concern for the United States and the broader international community for decades, and the impetus for extensive multilateral efforts to both engage with and contain North Korea’s proliferation activities. North Korea, however, still has technical hurdles to overcome before it can launch a reliable long-range nuclear weapon capable of striking the United States.

Pyongyang’s back-to-back announcements about its space development and active nuclear program make it easy to extrapolate that the two are related. The two messages come at a critical moment: the world is waiting to see if North Korea will attempt to put another satellite into orbit on the Oct. 10 anniversary of North Korea’s sole ruling party. North Korea is renowned for flaunting military might in showy parades commemorating important national holidays, and knowledge of this has fueled speculation on an impending space launch. 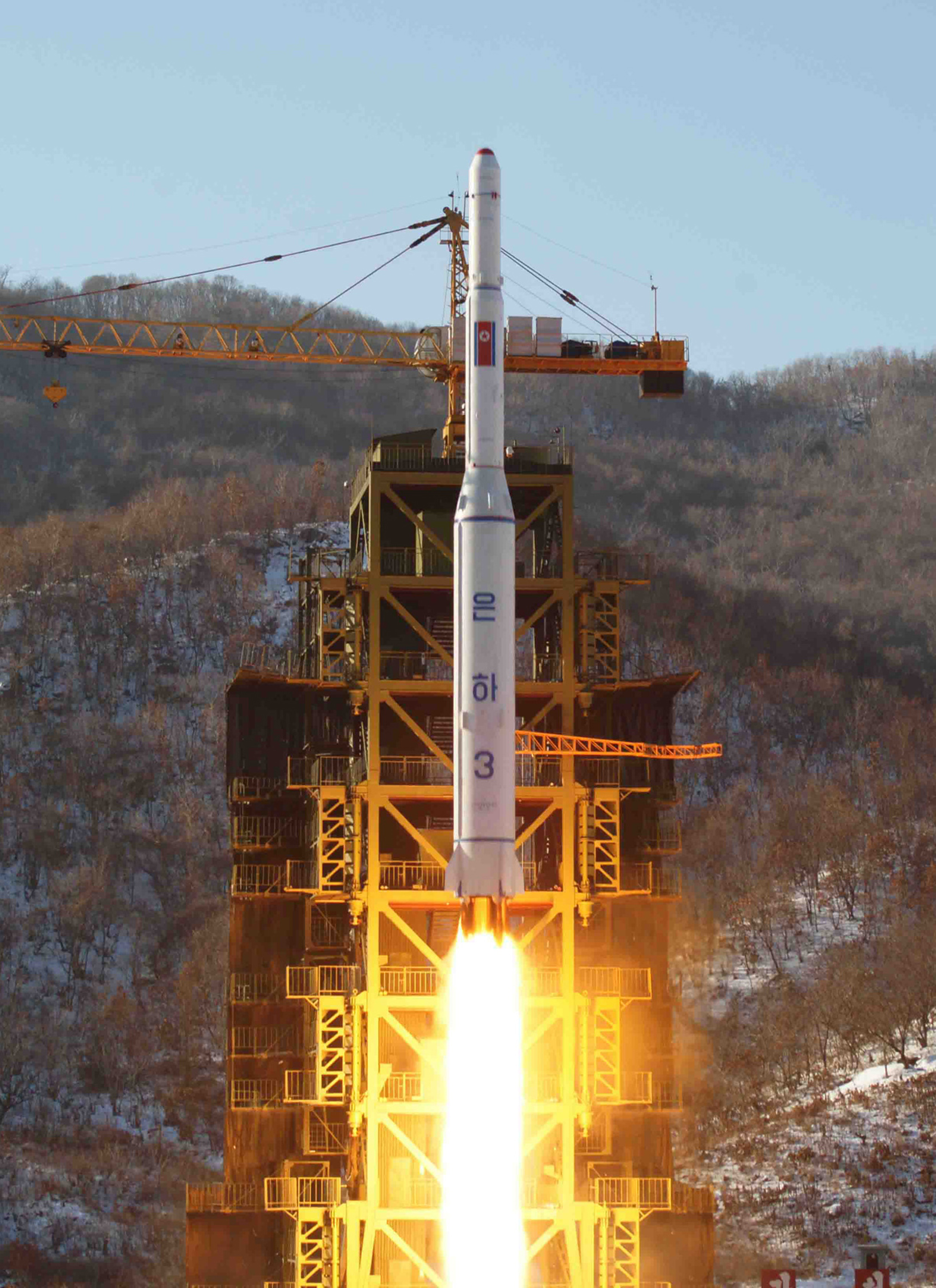 North Korea last launched a long-range Unha-3 rocket, in December 2012, which it claimed successfully put the Kwangmyongsong-3 satellite into orbit. Pyongyang maintains that space development is its “sovereign right” and that the people of North Korea are “fully determined to exercise this right no matter what others may say about it.”

The December 2012 successful launch of a satellite into space followed four failed attempts since 1998, indicating that North Korea is working steadily to improve its space launch capabilities. Ballistic missile launches by North Korea are prohibited by UN Security Council resolutions. The ban extends to the launch of Unha rockets, which employ clusters of the Nodong medium-range ballistic missile engine.

Reinforced by the timing of North Korea’s recent announcements, the paramount concern arising from another potential North Korean satellite launch this month is that the rocket technology used for such a launch would be directly applicable to a nuclear-armed intercontinental ballistic missile (ICBM) and would provide valuable missile testing data to North Korea. This presumption that a satellite launch vehicle and an ICBM are one in the same, however, is an oversimplification.

A Rocket is Not an ICBM

There is technical overlap between a satellite launch rocket and an ICBM. Weapons expert Michael Elleman described these similarities for Arms Control Today: both space launch vehicles and long-range missiles “use powerful rocket engines, high-strength and lightweight airframes, inertial navigation and guidance units, and payload separation mechanisms.” It is reasonable to believe that research and development of one type could inform the other, and vice versa.

Critical distinctions exist, however, which would preclude North Korea from merely testing a rocket designed as a satellite launch vehicle and then deploying it as a missile capable of delivering a nuclear warhead. History provides a striking lesson for the similarities between a space launch vehicle and an ICBM: civilian efforts to develop space launch vehicles “have never played a decisive role in the creation of a long-range missile.” If North Korea is attempting to use rocket launches to inform its ICBM capability, it is going about its research backwards.

A main distinction is that with a satellite launch, there is no reentry vehicle. After the satellite is placed into orbit, the delivering stage does not reenter the atmosphere. The reentry vehicle of an ICBM, which carries the nuclear payload back to its target, must withstand the abuse sustained in launch, flight, and reentry through the earth’s atmosphere. It is essential to validate the durability of a reentry vehicle under real conditions to ensure it is reliable to carry a nuclear weapon.

North Korea has not tested a reentry vehicle. Such a test would be nearly impossible to hide from international monitoring bodies and is forbidden under UN Security Council resolutions. Nor could the test of a reentry vehicle be written off as peaceful space development: reentry vehicles are the product of a “military first” state, not of a space-faring champion of scientific advancement.

Is North Korea “Fully Ready” to Use a Nuclear-Armed ICBM?

Beyond the challenge of perfecting a reentry vehicle, there is also the issue of affixing a nuclear device to a missile, or “mating” it, for delivery. In order to mate a nuclear bomb with an ICBM, it must be compact and light enough to be delivered, or “miniaturized.” Likewise, the ICBM must be powerful and durable enough to carry the payload. North Korea has conducted three nuclear explosive tests since 2006. The most recent test was conducted in February 2013. After that test, KCNA reporting suggested the “smaller and light A-bomb” with “great explosive power” diversified Pyongyang’s nuclear deterrent; essentially making the point that it tested a miniaturized nuclear bomb.

The miniaturization issue is the topic of ongoing debate in the U.S. intelligence community. Experts have not reached a consensus on whether or not North Korea has miniaturized a device, an exceedingly difficult task without hard evidence. Others believe North Korea, which has always tested devices of low yield, has done so purposefully to expedite the development of a miniaturized design. The possibility that Pyongyang has achieved a miniaturized bomb becomes increasingly probable with each successive test.

North Korea does not yet possess a combat-ready ICBM, and will not until it conducts sufficient testing. The North could, however, deploy an ICBM before it has been through extensive flight testing. North Korea has brazenly displayed missile designs in military parades without any flight testing, as with the Musudan intermediate-range ballistic missile and KN-08 ICBM. The medium range ballistic missile, the Nodong, was deployed after just one flight test.

While it is possible that North Korea could conduct a satellite launch, this end is uncertain. Hints from the state-run news planted the idea firmly in the Western consciousness and even provided an approximate date. North Korea has a penchant for pomp and circumstance, and demonstrated ambition to show off its military and technological prowess, regardless of the operational status of the given rockets and missiles. On the other hand, recent attempts to draw attention to the space program could be just another effort to manipulate politics, strike concern in its adversaries, and increase its salience as a formidable international player.

The Sohae satellite launch site is operational, but launch preparations have not been made at the site, a process that can take several weeks. Given the lack of launch preparations, North Korea is unlikely to send an Unha rocket skyward by the approaching Workers’ Party anniversary. North Korea’s imminent space launch ambitions remain opaque, and future rocket launches should be taken with a grain of salt. A rocket launch and a missile test are not one in the same. The risk of North Korea achieving a nuclear-armed ICBM, however, is an increasingly attainable outcome, illustrated by its fervent commitment to technical advancements. The international community, therefore, should redouble its efforts to convince North Korea to adhere to its Security Council resolutions, reinstitute and establish its respective missile and nuclear testing moratoriums, and rejoin the nuclear Nonproliferation Treaty as a non-nuclear weapons state.