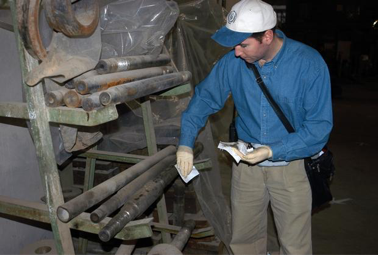 On 14 July 2015, after more than two years of intensive negotiations, the E3/EU+3* and Iran agreed the Joint Comprehensive Plan of Action (JCPOA) on ensuring the exclusively peaceful nature of Iran’s nuclear activities. On the same day, the International Atomic Energy Agency (IAEA) and Iran agreed on a work plan called the ‘Road-map for the clarification of past and present outstanding issues regarding Iran's nuclear program’.

Under the road map, the IAEA and Iran also concluded separate arrangements to address the issues of (a) a possible military dimension to Iran’s nuclear programme as set out in the Annex to the November 2011 IAEA report and (b) activities at Parchin, a large military-industrial factory in Iran.

IAEA monitoring and verification in Iran at Parchin[1] as recently reported, concerns two separate but related issues (1) IAEA environmental sampling and (2) IAEA (managed) access, to sites and locations at the Parchin military-industrial facility.

With regard to environmental sampling, this is not rocket science at the front end, i.e., taking swipes off walls, doors, floors, cracks, equipment, machinery, drains, etc. using small squares of fabric. These swipes are placed in clear plastic bags, much like the ones at airport security. Each swipe sampling kit has six sterile swipes in a sterile plastic bag. All six swipes are put back in the plastic bag after use, and three or four or more bags worth of swipes are collected at each location. The bags are sealed there and then on-site by IAEA safeguards inspectors[2] and transported to the IAEA Nuclear Material Laboratory (NML)[3] at Seibersdorf (near Vienna).[4] At the NML, the bags are opened in a sterile environment and the swipes are re-bagged and given numeric labels for anonymization. One set of swipes is analyzed by the IAEA at NML and the IAEA Environmental Sample Laboratory (ESL) at Seibersdorf to detect the presence of uranium or plutonium, and two or three sets are sent out to two or three different laboratories randomly selected from the 18 labs of the IAEA Network of Analytical Labs (NWAL) in nine States, with the one of the most advanced being AFTAC (Air Force Technical Applications Centre[5]) in the US. 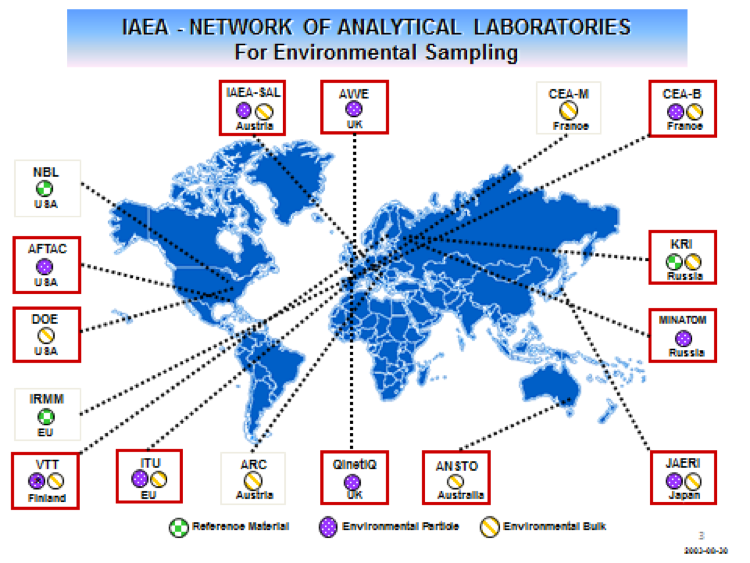 The “rocket-science” comes into play at the labs where through very sophisticated analyses using electron microscopes and mass spectrometers nuclear material can be detected at the nano-gram level.[6] There is no way an inspected State confidently can “sanitize” or erase all signs of nuclear material where it has been used at a location.

Under regular IAEA safeguards inspections, Agency inspectors carry out the swiping and collection of samples, as at Bushehr, Esfahan, Natanz, Fordow and elsewhere in Iran. Parchin being a military industrial facility is not subject to regular IAEA safeguards as it is not a “nuclear facility” as defined for purposes of IAEA safeguards. The IAEA, however, can request and obtain access to a facility such as Parchin under “managed access” provisions of Iran’s Additional Protocol (AP) to its safeguards agreement with the IAEA. It would be unusual but by no means technically compromising to have Iranian technicians collect swipe samples at sites and locations at Parchin in the physical presence and direct line of sight of IAEA inspectors, including filming, and using swipe kits and collection bags provided by the IAEA. The Agency inspectors then would seal the bags containing the swipe samples; they could leave behind one sealed bag at the IAEA Office in Iran as a “control” to be used if there is a dispute later about the results. The other three or four bags of swipe samples would be taken by the IAEA to NML/ESL and the analytical procedures described above would come into play. The results from all three or four labs to have analyzed the samples must match to give a positive or a negative finding on the presence and isotopics of uranium and/or plutonium. Given the sensitivity of the Iran nuclear file, it is not unreasonable under the circumstances for Iran to insist on following the sampling taking by its technicians in the presence of Agency inspectors noted above, mainly to guard against the risk of inadvertent contamination from nuclear material traces on the clothing of the inspectors which might have been worn at some other location in another country at a previous inspection. Such contamination while rare is not unknown and has occurred in a few cases elsewhere.

The views expressed in this blog post are those of the author.  They are not necessarily those of the Arms Control Association, its staff, or members of its Board of Directors.

A version of this blog post is also on SIPRI's website. Tariq Rauf is Director of the Disarmament, Arms Control and Non-Proliferation Programme at the Stockholm International Peace Research Institute (SIPRI), former Head of Verification and Security Policy Coordination, Office reporting to the Director General, International Atomic Energy Agency.

[3] See, IAEA, The IAEA Safeguards Analytical Laboratories: The Science Essential to Verifying the Peaceful Use of Nuclear Material, https://www.iaea.org/sites/default/files/safeguardslab.pdf.

[4] For an IAEA video on “How IAEA inspectors Swipe to Detect Nuclear Materials”, https://www.youtube.com/watch?v=NSgZKnGzJqI.