“It will take all of us working together – government officials, and diplomats, academic experts, and scientists, activists, and organizers – to come up with new and innovative approaches to strengthen transparency and predictability, reduce risk, and forge the next generation of arms control agreements.”
– Wendy Sherman
U.S. Deputy Secretary of State
June 2, 2022
The P5+1 and Iran Nuclear Deal Alert, June 2017

EU foreign policy chief Federica Mogherini reiterated the European Union's commitment to the nuclear deal with Iran known as the Joint Comprehensive Plan of Action (JCPOA) at a June 13 Oslo Forum press briefing. She said the EU will “guarantee that the deal keeps” and she is confident that the Iran policy review in the United States will lead to "wise decisions” and keep “something that is working.” 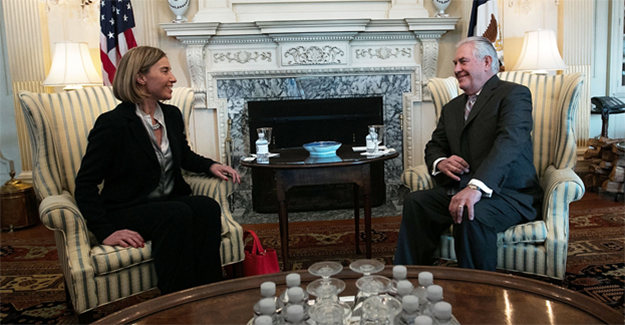 The Trump administration is conducting an interagency review of U.S. policy toward Iran, which includes examining Washington’s commitment to the nuclear deal (see more below).

Mogherini, who led the P5+1 (China, France, Germany, Russia, the United Kingdom, and the United States) in the negotiations with Iran, said that to date “we are defeating all these sceptics who first were betting on the impossibility to have an agreement” and noted that the International Atomic Energy Agency (IAEA) says for the sixth time that the deal “is fully implemented." More details on the most recent IAEA report are available below.

Former U.S. Secretary of State John Kerry, speaking at the same event, also reiterated that the deal is working and the region and world are safer “without a nuclear arms race.” He said it is important for all parties to comply with the agreement.

Speaking at a separate Ploughshares Fund* event June 6, Kerry warned against passing new sanctions on Iran. He said “if we become super provocative in ways that show the Iranian people there has been no advantage to this, that there is no gain, and our bellicosity is pushing them into a corner, that’s dangerous and that could bring a very different result.”

Despite Kerry’s warning, the Senate passed S. 722, the Countering Iran’s Destabilizing Activities Act of 2017 by a vote of 98-2. The bill was amended in committee to rectify sections that would have violated the deal, but some are concerned it still could complicate U.S. commitments in the JCPOA to remove certain entities from the Treasury Department's designated list in the future.

Iran contends that the bill contradicts the spirit of the deal. Seyed Abbas Araqchi, Iran’s deputy foreign minister, said June 11 that the bill is against the “goodwill” of the JCPOA. Araqchi said that Iran will bring its concerns over the legislation to the July meeting of Joint Commission, a body set up by the deal to oversee the JCPOA’s implementation.—KELSEY DAVENPORT, director for nonproliferation policy

*The Arms Control Association is a grantee of Ploughshares Fund.

The IAEA Board of Governors met June 12-16 and considered the most recent quarterly report by the agency on Iran’s nuclear program. Information contained in the report indicates that Iran is meeting its obligations under the nuclear deal.

According to the June 2 report, Iran’s stockpile of heavy water is 128.2 metric tons, below the 130-metric ton limit set in the agreement. After slightly exceeding the limit in November 2016, the past two IAEA reports have shown that Iran remains below the limit. While the November 2016 breech was not a proliferation risk, it is critical that Iran remain below the level set by the deal. According to a June 6 Reuters piece, Iranian officials told the IAEA that Iran plans to ship out an additional 20 tons of heavy water for storage abroad.

The June 2 report also noted that the heavy water production plant was shut down April 27 for maintenance. The report did not specify when the plant would resume operations, but noted that the agency has requested updated information from Iran on the plant's capacity.

The IAEA is also continuing to conduct complementary access visits under Iran’s Additional Protocol and is verifying that Iran is abiding by its commitments not to undertake certain activities related to weaponization contained in Annex I, Section T of the agreement. Past reports have not mentioned Section T, and unfortunately the report did not provide any details on how the IAEA is conducting verification activities in this area.

The report contained additional information demonstrating that Iran is meeting its commitments under the JCPOA. Including:

The report also said that there have been no construction activities at the Arak reactor based on its original design. Behrouz Kamalvandi, spokesman for the Atomic Energy Organization of Iran, said June 10 that the Arak reactor redesign project is well into the first year of execution and the reactor could be operational in another three or four years. China is helping execute the modifications on Arak.

Chris Ford, special assistant to the president and senior director for weapons of mass destruction and counterproliferation at the U.S. National Security Council, addressed the Arms Control Association annual meeting June 2. Ford responded to a question about the Trump administration’s commitment to the JCPOA, excerpts of which are included below:

We are in the middle of an ongoing Iran review, as you indicated. It is a broader review than just of the JCPOA.

One of our complaints, as we see it, about the previous administration was the degree to which, having gotten a nuclear deal it was a tempting conclusion to make other aspects of Iran policy sort of hostage to that deal… We felt that there is a -- an unwelcome reluctance to press back and hold Iran accountable on those fronts for fear that oh, my goodness, if you make them too mad they'll walk away from the deal. We are determined not to make everything hostage to the nuclear question.

But we're also determined to handle the nuclear question responsibly and wisely. And one of the things we're trying to do right now is to figure out how these moving pieces fit together. I am myself only involved in the nuclear piece of this. … Our JCPOA work feeds into a broader question of Iran policy and strategy and regional policy and strategy. And I would dare say that the right answer on the JCPOA is it's not possible. I mean you can give me all the options in the world, but I can't tell you what the right answer is unless I know what you want to do in this broader context.

And so, what we're endeavoring to do is to make sure that domestic interagency reviews fit together in a way that provide a coherent and responsible answer. And we're not done yet. Hopefully soon.

We are working very hard to make sure that this gets resolved as quickly as possible. Don't have a timeline for you, but it is being worked very hard, I can assure you, every day.

Building on the Nuclear Deal

The Atlantic Council released a set of papers June 13 outlining options to preserve and build upon the nuclear deal with Iran. Papers include recommendations on a range of issues, including of expanding verification measures, enhancing nuclear security cooperation, and multilateralizing uranium enrichment. Other papers looked at the function of sanctions and options to realize sanctions relief, Europe’s role in preserving the deal, and options for U.S. policy toward Iran.

A corresponding event at the Atlantic Council the same day included three panels that examined the implications of Iranian President Hassan Rouhani’s re-election, options to build on the nuclear deal, and sanctions on Iran. Video of the event is available here.