President Vladimir Putin's decision to send Russian military forces into the Crimean region of Ukraine earlier this month—on the basis of the claim that Ukraine's discredited former President Viktor Yanukovich requested Russian intervention—has put the world on edge and created one of the most serious political confrontations between Russia and the West since the end of the Cold War. 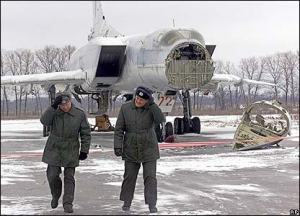 The Russian military deployments in Crimea not only compromise the integrity of a sovereign country in violation of international law, but the Russian actions are inconsistent with the explicit commitments given to Ukraine in the 1994 deal to help secure Ukraine's non-nuclear status and bring it into the nuclear Nonproliferation Treaty (NPT). As such, Russia's actions are also a threat to the integrity of the NPT regime, a cornerstone of the global security system upon which Russia, the United States and more than 190 states depend.

As detailed in an authoritative article in the January 1995 issue of Arms Control Today by Sherman W. Garnett, "Ukraine's Decision to Join the NPT" (republished further below), the government of Ukraine made the very important decision to remove the nuclear weapons it inherited from the Soviet Union, join the START I Treaty, and become a nonnuclear weapon state party to the NPT.

Ukraine's decision, Garnett explains, was made on the basis of the January 1994 trilateral statement by then-Presidents Leonid Kravchuk, Bill Clinton, and Boris Yeltsin. That statement, later formalized in December of 1994, linked U.S. and Russian nonproliferation objectives to Ukraine's economic and security concerns._

To help implement Ukraine's nuclear disarmament, Russia agreed to provide Ukraine with fuel rods for Ukrainian nuclear reactors containing low enriched uranium equivalent to the highly enriched uranium removed from the Ukrainian nuclear warheads that were transferred to Russia for dismantlement. For its part, the United States made available substantial resources and technical assistance through the Nunn-Lugar Cooperative Threat Reduction program to help with the elimination of Ukraine's missiles and silos, bombers and related infrastructure.

Without these bold steps, Ukraine would have been the third largest nuclear-armed state with 176 long-range ballistic missiles and 42 strategic bombers armed with more than 1,800 nuclear warheads, and a potential source of instability in the post-Soviet era.

The denuclearization of Ukraine was—and still is—in the security interests of Ukraine, Russia, Europe, and the entire international community.

For Ukrainian leaders, the nuclear arsenal they inherited from the Soviet Union was a security and managerial liability and not a useful military asset. Its liquidation opened the way for expanded economic assistance and well-defined security assurances.

To help assure the newly independent Ukraine that its security would not be compromised, Russia, the United Kingdom, and the United States formally agreed to respect its independence and refrain from economic coercion. They formally pledged in the Dec. 5, 1994 Budapest Memorandum to "refrain from the threat or use of force against Ukraine's territorial integrity." (See full text, further below.)

Nevertheless, Russia's actions clearly undermine the security assurances of the Budapest Memorandum and, unless Russia returns its troops to their home bases and refrains from annexing Crimea, they will have a chilling effect on efforts to assure nonnuclear weapons states that their security will not be threatened by NPT nuclear weapon states.

The Crimean situation and its implications for the NPT will likely be—and should be—the focus of many comments at the upcoming Preparatory Committee Meeting for the 2015 NPT Review Conference.

All NPT states parties should insist that key parties work toward a political solution to the crisis in Crimea that maintains Ukraine's territorial and political integrity, in part because it matters for the cause of nuclear nonproliferation.

In another potentially damaging move, Russian media reports published today suggest that Russia's Ministry of Defense is prepared to suspend receiving inspection teams as required under the 2010 New START Treaty because of "threats" to Russia from the U.S. and NATO over Russia's policy towards Ukraine.

According to the RIA Novosti source, "groundless threats to Russia from the U.S. and NATO regarding its Ukrainian policy are considered by us as an unfriendly gesture and allow to declare force majuere."

According to the Part Five, Section IX of the Protocol of the New START Treaty, the only basis for the cancellation of inspections are "circumstances brought about by force majuere," which is an event that is a result of the elements of nature, as opposed to one caused by human behavior.

U.S. Air Force personnel perform New START Treaty inspection training on a Minuteman III ICBM payload section at Minot AFB in 2011.
As Tony Blinken, President Obama's Deputy National Security Adviser, said on Meet the Press March 9, ceasing inspections as required by New START would be "a serious development."
Such a step, if pursued by the Russian Federation, would be an unnecessary and destabilizing response to the crisis in Ukraine that would threaten to unravel New START at a very critical time.
It is not in the interest of either the United States or Russia to walk away from New START, which establishes clear, verifiable limits on each sides remaining strategic nuclear arsenals and a measure of stability in an otherwise strained bilateral relationship.

Even before the Ukraine crisis, Russia had refused failing to agree to pursue further reductions of their strategic nuclear arsenals beyond New START. In 2013, President Putin rebuffed President Barack Obama's proposal to pursue a further one-third cut below New START levels (1,550 deployed strategic warheads and 700 delivery vehicles). As I explained in an article in June 2013 in The Moscow Times, "Adjustments to nuclear and military postures certainly require careful consideration, but it is already clear that maintaining the status quo is not in the strategic interests of Moscow or Washington."

The P-5 have been under intense criticism from nonnuclear weapon states for failing to make concrete progress on a number of the disarmament commitments they made in the 2010 NPT Review Conference Final Document and for failing to engage in a dialogue on the humanitarian effects of nuclear weapons.

Any actions that lead to the unraveling of New START would compound international condemnation of Russia's nuclear weapons and disarmament policies.

Sherman W. Garnett is a senior associate at the Carnegie Endowment for International Peace. Before joining the Endowment, he served as the acting deputy assistant secretary of defense for Russia, Ukraine, and Eurasia.

The overwhelming vote (301-8) by the Ukrainian parliament (Rada) November 16 to accede to the nuclear Non-Proliferation Treaty (NPT), only days before President Leonid Kuchma's visit to Washington, came as a surprise to many observers who had anticipated far stronger opposition or even rejection of the treaty. In an atmosphere of growing competition within Ukraine between the executive branch and parliament over economic reform and political power, there appeared to be little time or inclination for the Rada to act before Kuchma's departure.

Further, many analysts believed that if the Rada did act it would likely impose conditions at least as severe as those it attached to its ratification of START I in November 1993, which threatened to stymie momentum toward nuclear disarmament. Not without reason, given Kiev's long period of vacillation on the issue of NPT accession, there were thus many who expected the struggle with the Rada to spill over into 1995.

But despite the pessimism expressed by most observers, it is possible, especially in retrospect, to see the decision to accede to the NPT as the inevitable result of the strategic deal struck by then-President Leonid Kravchuk and Presidents Bill Clinton and Boris Yeltsin in their trilateral statement of January 1994 (in which U.S. and Russian nuclear non-proliferation objectives were linked to Ukraine's security and economic concerns) and the growing confidence of all parties that this three-party arrangement was not only working, but was quite clearly the best deal Ukraine was likely to get. (See ACT January/February 1994.)

BOX: U.S., Russian and British Security Assurances to Ukraine
Memorandum on Security Assurances in Connection With Ukraine's Accession to the Treaty on the Non-Proliferation of Nuclear Weapons
Budapest, December 5, 1994
The United States of America, the Russian Federation, Ukraine, and the United Kingdom of Great Britain and Northern Ireland,
Welcoming the accession of Ukraine to the Treaty on the Non-Proliferation of Nuclear Weapons as a non-nuclear-weapon state,
Taking into account the commitment of Ukraine to eliminate all nuclear weapons from its territory within a specified period of time, noting the changes in the world-wide security situation, including the end of the Cold War, which have brought about conditions for deep reductions in nuclear forces, confirm the following:

This memorandum will become applicable upon signature, signed in four copies having equal validity in the English, Russian, and Ukrainian languages.
(Signed)
For the Russian Federation
For Ukraine
For the United Kingdom of Great Britain and Northern Ireland
For the United States of America

[ii] See, for example, the two surveys reported in Ukrayina Moloda, May 21, 1993, and Holos Ukrayiny, August 6, 1993, which underscore how the divided polity within Ukraine forces consensus politics and complicates the search for a coherent policy on Russia.

[iv] The existing prior agreements on territorial integrity amounted to conditional recognition of the existing frontiers, premised on Ukraine's continuing participation in the CIS- a point stressed by Russian Foreign Minister Andrei Kozyrev to the Russian parliament in April 1992. FBIS Daily Report: Central Eurasia, April 22, 1992, pp. 14-18.

[v] March 22, 1994, press conference in Kiev attended by the author, Ukrainian Defense Minister Vitaliy Radetsky invited the United States to mediate in Russo-Ukrainian negotiations on the division and basing of the Black Sea Fleet.