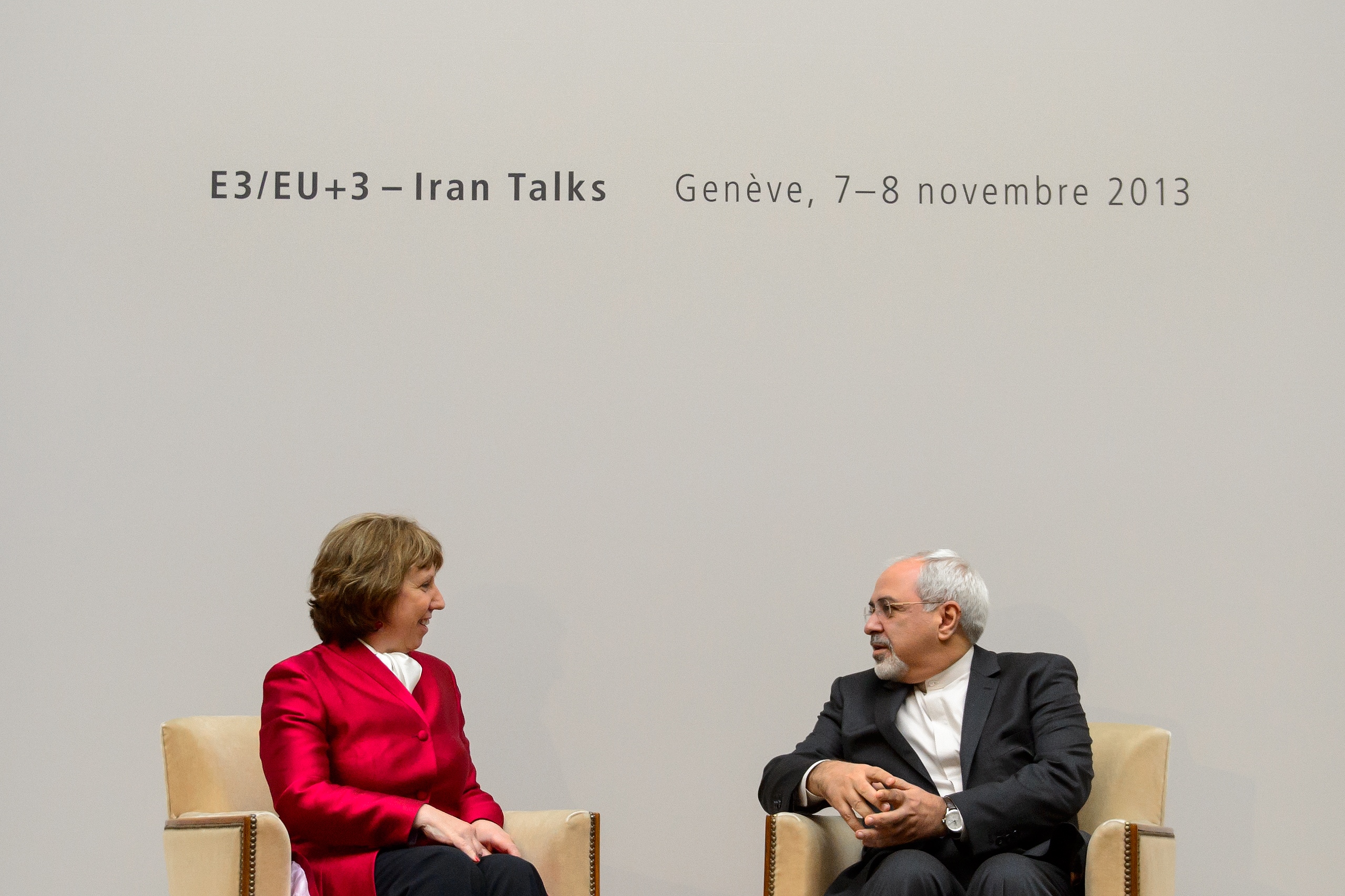 EU foreign policy chief Catherine Ashton meets with Iranian Foreign Minister Javad Zarif on Nov. 7, before the start of the nuclear talks between Iran and the P5+1. (FABRICE COFFRINI/AFP/GettyImages)

For nearly a decade, negotiators from United States and other major powers have sought but failed to reach a deal with Iran to guard against the possibility that Tehran may someday seek to build nuclear weapons.

Since the last major diplomatic opportunity to limit Iran's program was squandered in 2005-06, Iran has increased its capacity to enrich uranium significantly -- from less than 300 to more than 19,000 uranium centrifuge machines at two facilities -- despite the imposition of increasingly tough international sanctions.

According to U.S. intelligence estimates, Iran is still more than a year away from amassing enough fissile material and building nuclear weapons if it chose to do so, but its capabilities are growing. Additional centrifuges could be brought online in the coming months, more efficient centrifuges could be put into operation, an a new heavy water reactor that will produce plutonium that could be used for nuclear weapons may be operational by late-2014.

Now is the time to finally secure a meaningful agreement to limit Iran's nuclear capabilities on the basis of realistic and achievable goals.

Both sides are highly motivated to resolve the issue and the new Iranian negotiating team is exhibiting uncommon seriousness and pragmatism.

Within Striking Distance of A "First Phase" Deal

After nearly two days of talks, the negotiators are now very close to reaching an historic framework deal that will pause Iran's nuclear progress in exchange for a partial and temporary lifting of certain sanctions. The foreign ministers of France, Germany, and the United Kingdom have flown to Geneva to join U.S. Secretary of State John Kerry and Iranian Foreign Minister Mohammad Javad Zarif, while the Russian and Chinese foreign ministers are said to be traveling to Geneva as well.

The deal under consideration would address the most immediate issues of proliferation concern and put "time on the clock" to negotiate a more permanent agreement that might lead to a significant reduction of Iran's overall enrichment capacity.

Such an agreement would clearly be a win for U.S. and international security. Key elements likely include:

These measures track closely with the P5+1 proposal for Iranian actions put forward at the April 2013 talks in Almaty.

In exchange for these concrete steps, the P5+1 may be considering:

A deal along these lines would provide time to quickly negotiate a more permanent, far-reaching agreement to reduce Iran's capacity to produce material that could be used for nuclear weapons, put in place much more intrusive international inspections to guard against a secret bomb program, and further scale-back the oil and financial sanctions that are devastating Iran's economy.

To secure a "final phase" agreement, the P5+1 need to recognize Iran's right under the Article IV of the NPT to pursue peaceful nuclear activities under certain conditions. As Obama said in his Sept. 24 address to the United Nations, such recognition requires that Iran adequately and satisfactorily respond to the international community's concern about the nature of its program.

To resolve those concerns, Iranian President Hassan Rouhani must follow through on his pledge for "greater transparency" by implementing the additional protocol and fully cooperating with the IAEA to resolve questions about suspected weapons-related experiments that may have been conducted over a decade ago. On Monday, IAEA Director-General Amano will meet with top Iranian officials in Tehran to try to reach agreement on the IAEA's stalled investigation of past Iranian activities of "possible military dimensions."

Unfortunately some key players, including Israeli Prime Minister Benjamin Netanyahu and some members of Congress, are demanding much more from the talks and risk getting nothing.

The Chairman of the Senate Foreign Relations Committee Robert Menendez (D-NJ) apparently believes the P5+1 should hold out longer in the hope that with additional sanctions Iran will capitulate and agree to indefinitely halt all enrichment work and dismantle its key nuclear facilities. Such an approach is naive and unrealistic.

Zero enrichment in Iran would be ideal from a nonproliferation standpoint and it might have been possible years ago when Iran's program was far less advanced, but it is not attainable today.

Demanding the perfect deal and getting nothing is reckless and dangerous.

Members of Congress must understand that further sanctions will not halt or eliminate Iran's nuclear weapons potential and will undermine the prospects of a deal to pause Iran's nuclear progress.

Furthermore, most international and national sanctions will remain in place and continue to put tremendous pressure on Iran, its people and economy, until its leaders take the final steps necessary to give the international community confidence that it is not pursuing nuclear weapons. But Iran is not likely agree to limits on its nuclear program if there is no prospect for serious sanctions relief.

Members of Congress should be mindful that the United States is just one of the P5+1 negotiating team and if the United States Congress becomes the impediment to a common sense agreement to pause Iran's nuclear progress in exchange for limited and temporary sanctions relief, international support for sanctions will erode.

And, if Congress undermines the negotiations by approving legislation mandating even tougher sanctions or that removes President's authority to temporarily waive some existing sanctions in order to obtain concessions from Iran, Congress will be responsible for the likely outcome: improving Iranian nuclear capabilities and the growing threat of a military conflict.

The next few hours and days may represent the best chance to guard against a nuclear-armed Iran. We and a wide range of diplomatic experts agree that diplomacy is the best option on the table.