“The Arms Control Association and all of the staff I've worked with over the years … have this ability to speak truth to power in a wide variety of venues.”
– Marylia Kelley
Tri-Valley Communities Against a Radioactive Environment
June 2, 2022
The State of the Union and Nuclear Policy 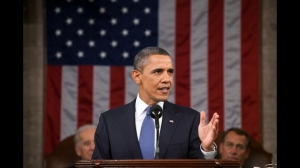 By Rob Golan-Vilella Last night, President Barack Obama delivered his annual State of the Union address to a joint session of Congress. As expected, the speech focused heavily on domestic and economic policy. With unemployment still over 9% and the national discussion still largely overshadowed by the fallout from the recent shootings in Tucson, it was unsurprising that foreign policy issues received little mention. Most of the comparatively brief section on foreign policy was devoted to terrorism and America's ongoing wars in Afghanistan and Iraq. Still, Obama offered up a few remarks on nuclear weapons issues. As he said:

American leadership can also be seen in the effort to secure the worst weapons of war. Because Republicans and Democrats approved the New START treaty, far fewer nuclear weapons and launchers will be deployed. Because we rallied the world, nuclear materials are being locked down on every continent so they never fall into the hands of terrorists. Because of a diplomatic effort to insist that Iran meet its obligations, the Iranian government now faces tougher sanctions, tighter sanctions than ever before. And on the Korean Peninsula, we stand with our ally South Korea, and insist that North Korea keeps its commitment to abandon nuclear weapons.

While short, these words point to an important truth: the Obama administration has compiled an impressive record on nuclear issues over the past two years. Between adopting a new nuclear posture, locking down sensitive nuclear materials, rallying the international community to impose the most stringent sanctions on Iran yet, and concluding the New START treaty, it is a solid record of American leadership. Nevertheless, much work remains to be done. The agenda that Obama laid out in Prague contains a number of additional steps, most prominently Senate reconsideration of the Comprehensive Test Ban Treaty. The United States has not conducted a nuclear test since 1992 and has no need to conduct any further tests. Meanwhile, the CTBT would improve our ability to detect and deter other states from conducting nuclear tests and improving their nuclear arsenals. For more in-depth analysis on the need for American action on the CTBT, see ACA's Project for the CTBT. In addition, Obama pledged to work toward the successful conclusion of a fissile material cutoff treaty. Nearly two years after the Prague speech, with the Conference on Disarmament still deadlocked over an FMCT due to resistance by Pakistan, it is clear that Washington will need to pursue other options. Assistant Secretary of State Rose Gottemoeller has said that U.S. patience with the continued deadlock "is drawing a bit thin," but the administration has done little to describe an alternate way forward. A number of possible "Plan B" options are outlined in ACA Executive Director Daryl Kimball's editorial, "Time for Leadership on the Fissile Cutoff." President Obama's words on nuclear policy last night were a brief but important reminder of what the United States has accomplished in the past two years. They should also prompt us to ask what more must be done. On issues ranging from the CTBT and FMCT to ongoing proliferation challenges in Iran and North Korea, continued American leadership is essential. Hopefully, we will hear members of the administration continue to highlight their achievements and advance their nuclear agenda on all of these subjects in the months ahead.