A recently released GAO report highlights the value of U.S. arms sales, either by the U.S. government or licensed private companies, between 2005-2009, as well as some problems with the current U.S. system for reporting arms sales.

In one oversight gap, the State Department authorizes direct commercial sales (DCS) but it does not collect data from the U.S. companies with DCS export licenses. Another gap in information is due to a lack of transparency regarding arms sales. The issue of transparency is partially due to something as simple as the Department of Defense not posting the information online. In addition, the two departments may apply different classifications to the same piece of hardware, which can make assessing total arms sales difficult.

The GAO recommends greater coordination between the State Department and the Department of Defense, as well as adopting a "common category system" for defense hardware exports.

During the period covered by the report, the value of U.S. arms sales totaled nearly $101 billion dollars. The significant numbers attached to U.S. arms sales drive home the GAO's suggestion that the executive branch needs to rectify oversight gaps. The figures also draw attention to the magnitude of a media-estimated $60 billion U.S.-Saudi Arabia arms deal that may soon be sent to Congress for review.

In addition, the report listed the top seven recipients of U.S. arms sales between 2005-2009. 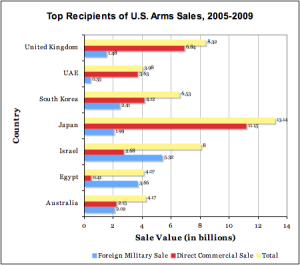