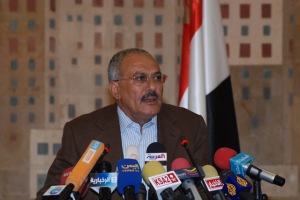 On April 3 the New York Times published a news story citing U.S. administration officials that stated the United States had over the past week adopted a new position calling for the departure from office of Ali Abdullah Saleh, longtime President of Yemen. While a State Department spokesperson moved quickly to quash these reports of a firm change in policy, the case is drawing particular attention because Saleh, an American ally in the so-called global war against terror, has received considerable material and political support from the United States. Saleh's appreciation for this support has extended to taking responsibility for U.S. cruise missile and precision-guided bomb attacks on Al-Qaeda targets within Yemen, according to cables released by Wikileaks. At least one such attack in 2009 appears to have involved the use of cluster munitions.

This month, Arms Control Today reported on the arms embargo on Libya mandated by the UN Security Council and the extent of arms sales to the government of Moammar Gaddafi. In the course of the research done for this article, ACT also looked at arms sales policies to other Middle Eastern states that have enjoyed healthy military trade relations with the United States, including Yemen.

U.S. assistance and arms transfers to Yemen have continued despite a restrictive U.S. arms policy toward the country that was put into place in 1992 and remains enforced to this day, as confirmed by a State department spokesperson. This policy states that:
"...all licenses and other approvals to export or otherwise transfer defense articles or defense services to Yemen are being reviewed on a more scrutinized case-by-case basis with a presumption of denial for lethal defense articles or items supporting such articles."

From 2005 to 2009, the United States approved licenses for the direct commercial sale to Yemen of defense articles regulated by Section 38 of the Arms Export Control Act worth $66.5 million, including $264,000 worth of firearms or other weapons in 2009. The majority (in terms of value) of these licenses was for parts, components and equipment for tanks and aircraft. These figures are calculated using the annual '655 reports' the U.S. State Department prepares on the licenses for arms sales that it grants.

The United States is not, however, the only exporter of military goods to Yemen; according to annual EU arms exports reports, 85.9 million euros ($122 million) worth of firearms, ammunition, and bombs, rockets or missiles were approved for sale by Bulgaria in 2009, as well as 40.4 million euros ($57 million) of exports by France in 2004. A U.S. diplomatic cable released by WikiLeaks describe the Bulgarian sale as having included 30,000 assault rifles as well as explosives and Rocket Propelled Grenades (RPGs). According to the cables, this particular shipment was financed by the government of the United Arab Emirates (U.A.E.). The U.S. embassy in Sana'a which authored these cables expressed concerns that the deal would contribute to further small arms proliferation in Yemen.

In addition to importing arms from abroad, the Saleh government has also initiated at least one project for the domestic production of a limited range of weapons systems. Last June, the Yemen Observer and Yemen Times reported that a government-controlled armaments factory in Sana'a had begun production in 2009 of armored cars with the aid of advisers from South Africa. According to the arms transfers database maintained by the Stockholm International Peace Research Institute (SIPRI), around 85 first- and second-generation models of these vehicles had been produced by 2010.

Aside from government acquisition of armaments, Yemen also has a high rate of individual gun ownership. A report in The National, a U.A.E. publication, notes that the 10 million small arms and light weapons in Yemen are distributed among a population of only twice that number. On March 24, police in Dubai announced that they had stopped a shipment of some 16,000 small arms bound for an unknown recipient in Yemen. The majority of the shipment consisted of pistols. These weapons are unlikely to have a significant impact on military operations and were probably intended to function as gifts or status symbols, according to experts cited in The National.

This post is one of series following the arms trade with countries undergoing change in the Middle East and lessons to be learned from that trade. Please see previous posts on initial exporter reactions with an update on U.S. trade with Libya, and need for a U.S. review of its arms transfers policies.