Authored by Matt Sugrue and Rob Golan-Vilella on September 21, 2010

In an op-ed for the New York Post, Heritage Foundation analyst Peter Brookes warns against New START on the grounds that treaty reductions may increase the strategic threat from China's arsenal.

"[U.S.] lawmakers haven't yet fully faced the problem that, as we build down our strategic nuclear forces (by some 20 percent under New START) in the White House's hopes that others will disarm, China is involved in a strategic buildup.
So, before there's any final vote on an arms-control pact that would endure for the next 10 years, it'd be wise to give some thought to Beijing's burgeoning bevy of bombs." "Indeed, if any country can undertake a so-called 'rush to [nuclear] parity' with the United States and Russia, it's China, especially considering its aspirations, wealth and willingness to lavish largesse on its armed forces. Basically, Beijing could become a nuclear peer competitor of Washington and Moscow in the not too distant future, in light of the expected arms cuts under New START."

By sounding alarm bells about the danger of China obtaining nuclear parity, New START detractors have glossed over the actual size of the gap between China's nuclear stockpile and those of the U.S. and Russia. 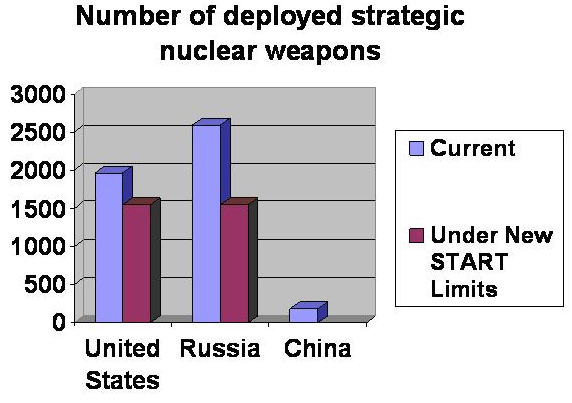 The simple fact of the matter is that New START does not reduce U.S. or Russian strategic nuclear forces to a level that endangers the status quo. Even after the reductions called for in New START, the Russia and the United States will still be secure as the global leaders in strategic nuclear weapons.

As the numbers demonstrate, China has a very large gap to close before it achieves parity with either Russia or the United States, even under New START. The fear-mongering surrounding New START ratification has, unfortunately, resulted in overblown conclusions regarding the treaty's impact on U.S. and world security.