The United States expressed its regret over the UN secretary-general’s failure to initiate an investigation into evidence that Iran is supplying Russia with drones in violation of a UN Security Council resolution. 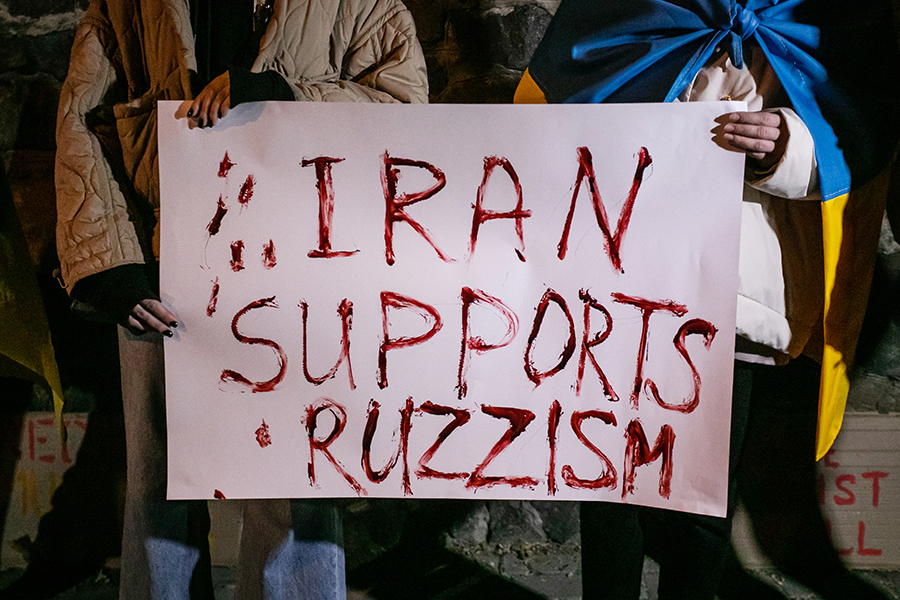 The United States, along with France, Germany, and the United Kingdom, requested in October that Secretary-General António Guterres investigate the drone transfers as part of his mandate to report on implementation of Security Council Resolution 2231. The request followed an Oct. 17 letter from Ukraine to Guterres accusing Iran of transferring the drones to Russia in violation of the resolution.

Resolution 2231 was passed unanimously in July 2015. In addition to endorsing the Iran nuclear deal, known as the Joint Comprehensive Plan of Action (JCPOA), it prohibits Iran from transferring nuclear-capable ballistic missiles and drones, as well as certain materials and technologies relevant for building those systems, until October 2023 without approval from the Security Council.

The secretary-general is charged with reporting twice a year on the status of the resolution and has investigated evidence of illicit missile transfers in the past. But his Dec. 12 report said only that the UN Secretariat is “examining the available information” and will report any findings to the Security Council “as appropriate.”

Robert Wood, the U.S. alternative representative to the United Nations, told the Security Council during a Dec. 19 meeting that, for the past seven years, the UN mandate to report on Resolution 2231’s implementation “has been clear and unquestioned.” The failure to open an investigation “is not acceptable,” and there must “be some degree of accountability for openly violating” council resolutions, Wood said.

Vassily Nebenzia, Russian ambassador to the UN, disputed Guterres’s authority to conduct an investigation under the resolution and said Russia shared its legal analysis regarding this issue with the secretary-general. Nebenzia said on Dec. 19 that any “pseudo-investigations are legally null and void” and that Guterres must not “succumb to pressure of Western states.”

Iran has admitted to selling drones to Russia, but denied that its actions violate the resolution’s provisions. In a Nov. 5 statement, Iranian Foreign Minister Hossein Amirabdollahian said Iran “sold a limited number of drones” to Moscow but the transfer took place prior to Russia’s invasion of Ukraine. Amirabdollahian said that if Ukraine proves that Russia used Iranian drones in the war in Ukraine, “we will not remain indifferent to this issue.”

In two letters to Guterres in October, Iran said that it “has never produced or supplied” materials and technologies that “could contribute to the development of nuclear weapon delivery systems” and argued that Resolution 2231 only restricts the transfers of items that could contribute to such systems.

The resolution uses the Missile Technology Control Regime (MTCR) export control lists to define the materials and technologies that Iran is prohibited from transferring without Security Council approval. The MTCR seeks to limit the spread of missiles and drones capable of delivering nuclear warheads, which the regime defines as systems that can carry a 500 kilogram payload more than 300 kilometers.

Sergiy Kysltsya, Ukrainian ambassador to the UN, said that the drones transferred to Russia fall into the categories covered by the MTCR export control list and therefore violate the resolution. He invited UN experts in October to examine drones and drone debris recovered and open an investigation.

Barbara Woodward, UK ambassador to the UN, expressed support for such a visit and encouraged Guterres to “examine and report” any evidence of transfers inconsistent with the resolution. She also strongly cautioned Iran “against any further deliveries of weapons to Russia” and said that transferring short-range ballistic missiles would “constitute a serious escalation.”

In the Dec. 12 report, Guterres called for the United States and Iran to return to compliance with the JCPOA, but the diplomatic stalemate appears likely to continue.

EU foreign policy chief Josep Borrell met Amirabdollahian in Jordan on Dec. 20 and said that both agreed to “keep communication open” and to restore the JCPOA on the “basis of Vienna negotiations.” The parties last met in Vienna in August, and those meetings informed the draft agreement to restore the JCPOA that Borrell described as “final” and circulated to the parties on Aug. 8. (See ACT, September 2022.)

Prior to the Dec. 20 meeting, Borrell told the EU Foreign Affairs Council that “we do not have a better option than the JCPOA to ensure that Iran does not develop nuclear weapons” and that although Iran’s nuclear escalation is “of great concern, we have to continue engaging as much as possible in trying to revive this deal.”

But there does not appear to be any progress on resolving the issues that prevented the parties from reaching an agreement based on Borrell’s August draft.

Iranian officials remain adamant that an agreement to restore the JCPOA cannot happen until the International Atomic Energy Agency (IAEA) closes its investigation into past Iranian nuclear activities that should have been declared under Iran’s legally binding safeguards agreement.

The United States and the European parties to the deal have made clear they will not pressure the IAEA to prematurely end the investigation. (See ACT, December 2022.)

IAEA officials, including the head of the safeguards department, Massimo Aparo, traveled to Tehran on Dec. 18 to continue discussions about the investigation. The IAEA did not comment on the meetings, but Iranian officials described them as businesslike.

Kamal Kharrazi, head of Iran’s Strategic Council on Foreign Relations, said that resolving the safeguards issue could “break the ice” on the stalled JCPOA negotiations.

Even if there is progress on the safeguards issue, the political space for reaching an agreement to restore the JCPOA is narrowing.

Iran’s transfer of drones to Russia and brutal crackdown against peaceful protesters has shifted U.S. and European focus away from the JCPOA. Iran’s nuclear advances also continue to erode the nonproliferation benefits of a restored accord.

Antje Leendertse, German ambassador to the UN, said on Dec. 19 that the “prospects for a sustainable diplomatic solution” have been “fading in recent months.” She cited Iran’s nuclear escalation and support for Russia’s “brutal and unprovoked war of aggression against Ukraine.”

Nebenzia said that the JCPOA remains the “best tool” for strengthening the nonproliferation regime and it must “become fully functional again as soon as possible.”

He accused the United States and Europe of using the drone transfer allegations to undermine the JCPOA. The allegations were “first made the moment the Vienna talks entered the final stage,” which clearly shows “who is simply politicizing the discussion,” he said.