After three weeks of intense debate, detailed drafting sessions, and late-night meetings, the ninth review conference of the Biological Weapons Convention (BWC) agreed to establish a working group aimed at strengthening the convention, which outlaws biological arms and entered into force in 1975. The final document approved on Dec. 16 mandated that the working group develop specific, possibly legally binding, measures to support international cooperation, scientific research, and economic and technological development for peaceful purposes. 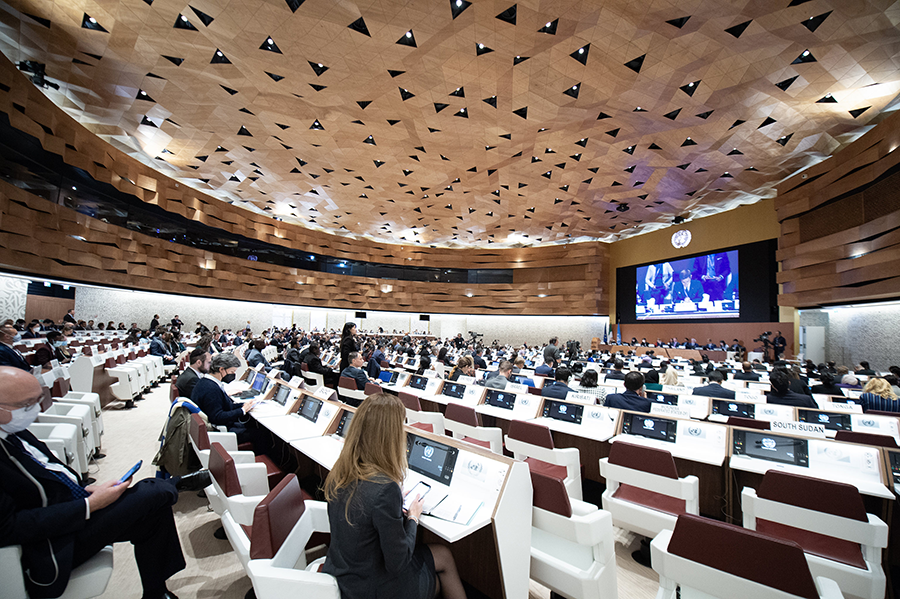 The working group is to recommend establishing two other mechanisms: one to support international coperation and assistance in implementing the BWC and the other to review and assess BWC-related scientific and technological developments and to provide states-parties with relevant advice. Overall, these decisions are intended to “bring the convention into the 21st century,” one delegate said.

Convention delegates came armed with a plethora of proposals contained in 65 working papers.1 Nevertheless, after the recent nuclear Nonproliferation Treaty (NPT) review conference failed to achieve consensus on its final document, BWC states-parties recognized that it would take extreme efforts to achieve success at their review conference.

Delegates also realized that international tensions over Russia’s war on Ukraine and the widely refuted Russian accusations that the United States was involved with biological weapons laboratories in Ukraine would make this conference a deeply challenging exercise. Facing these odds, delegates burst into resounding applause as the final document was adopted.

The COVID-19 pandemic helped the world understand that diseases could be used deliberately to cause widespread panic, emergency health crises, millions of deaths, and severe economic damage. This increased awareness of a shared international vulnerability caused most states-parties to work to give the BWC a more active role or at least put it on par with the NPT and the Chemical Weapons Convention. Even so, some states-parties insisted on deleting any reference to COVID-19 in the final document.

The new working group will address measures on international cooperation and assistance under Article X of the convention, which calls on states-parties to facilitate the exchange of equipment, materials, and scientific and technological information for peaceful purposes. It will also address scientific and technological developments, as well as confidence-building and transparency efforts to improve reporting on national biological activities. Further, the group will consider compliance and verification measures and measures to improve domestic laws and regulations to implement the convention.

The group will address assistance, response, and preparedness under Article VII, which calls for states-parties to provide support to a state that has “been exposed to danger as a result of violation of the convention.” The group also will consider organizational and financial arrangements to cover the costs of BWC meetings and the convention’s Implementation Support Unit (ISU).

The new working group has been authorized to meet for 15 days each year from 2023 to 2026 and to adopt a report with recommendations to be submitted to BWC states-parties at the 10th review conference, to be held no later than 2027.

The final document did not include many of the ambitious proposals that enjoyed cross-regional support from numerous states-parties and that were included in a previous draft just one day before the conference ended.2 For instance, the previous draft included the explicit establishment of a working group and two other mechanisms, as well as descriptions of how they would operate. This outcome would have allowed states-parties to start the substantive work in all three groups immediately instead of waiting for recommendations to establish two of them.

The draft called for an advisory group that would facilitate international cooperation under Article X, which states from the Non-Aligned Movement (NAM) had been requesting for many years. They contend that they have been prevented from benefitting from the BWC’s peaceful uses provisions, which stipulate that the convention should “avoid hampering the economic or technological development of states-parties to the convention or international co-operation in the field of peaceful bacteriological (biological) activities.”3 The advisory group would include a database to match offers and requests for assistance, as well as a voluntary trust fund to support projects under Article X.

The prior draft also would have established a scientific advisory board, which many delegations have long recommended. They recognize that rapid advances in the life sciences, in particular biotechnology tools that can alter organisms, such as genetic editing, can be used to greatly benefit public health, medicine, agriculture, and the environment, but can also be applied for nefarious purposes banned by the convention. The plan was to have the working group on strengthening the convention make recommendations on the board’s mandate, composition, financial implications, and other arrangements. The board would consist of a scientific advisory group open to all and a limited size scientific reporting committee.

The conference facilitator, Ljupco Gjorgjinski of North Macedonia, worked with delegates for months to develop the terms of reference and rules of procedure for this proposed scientific body. Iran has long opposed such a group, although the proposal has been supported by states from all regional groups. Each of the two new mechanisms would have acquired an additional ISU staff.

The United States, long maligned because it rejected the BWC Verification Protocol in 2001, took steps to change that image. Bonnie Jenkins, U.S. undersecretary of state for arms control and international affairs, introduced an initiative in late 2021 calling for a process to examine compliance that could lead to discussions on verification. Since 2001, many NAM states have requested a legally binding protocol that would include verification. The United States also accepted the idea of an international cooperation entity, which it previously opposed due to concerns that some countries would focus on export controls. As one U.S. delegate put it, “We were rolling out the red carpet at this conference.”

These gestures, however, seemed to go largely unnoticed. Iran, Cuba, and other NAM members repeated their complaints about “unilateral coercive measures” that they say violate Article X by denying them access to vaccines, materials, and equipment. This tension between developing countries that want an increased exchange of technology and developed countries that are concerned mostly with nonproliferation has played out in numerous multilateral forums.

Russia’s claims about biological weapons laboratories in Ukraine, strongly refuted by Ukraine and the United States, played a role in the review conference deliberations. Russia had brought its allegations to the UN Security Council and instigated a formal meeting in August under the consultation and cooperation provisions of BWC Article V, but no conclusions were reached.

Russia wanted to include language in the review conference final document stressing the need for further investigations of its allegations regarding biological laboratories in Ukraine and what it considered an insufficient response from the United States and Ukraine. Moscow proposed establishing a group of governmental experts to determine guidelines for conducting Article VI investigations.4

Normally, the review conference final document comprises three parts. Part I, which deals with the organization and work of the conference, lists the dates, agenda, documents, and participants. In Part II, the final declaration, states-parties reaffirm their general aspirations and support for the convention’s principles, followed by a detailed review of its 15 articles. Part III contains the decisions and recommendations in which parties look to the future, outlining the intersessional process and other recommendations.

In the December 15 draft final document, Part II was 14 pages long and included mature reflections on strengthening each article. On the final day of the conference, however, the conference president, Leonardo Bencini of Italy, announced that consensus was not possible on that part of the document. He had held closed-door consultations with delegations until the early morning of December 16, but they were unable to agree on a number of contentious issues, including proposed Russian language on biological weapons laboratories in Ukraine. The section on recommendations also was considerably reduced. Due to the consensus rule in most UN multilateral forums, it is possible for one country to prevent an agreement.

The penultimate draft included several other proposals that ultimately were dropped from the final document. One encouraged states-parties to incorporate elements from the recently developed Tianjin Biosecurity Guidelines for Codes of Conduct for Scientists.5 These guidelines, initiated by China with U.S. support, had been sought by a majority of the international community and already have been adopted by more than 140 scientific academies worldwide.

Another deleted provision recommended that states-parties promote best practices in life sciences research, including oversight in infectious disease research to improve biosafety and biosecurity globally. It called on stakeholders to apply standards to manage risks posed by working with infectious agents and toxins in laboratories and recommended that states-parties adopt model laws in their national legal codes.

The draft also had included proposals on methods to increase the participation of states-parties in submitting their annual UN forms on confidence-building measures.6 These forms, which typically draw responses from only half of the states-parties, contain an exchange of information on research centers and laboratories, national biological defense research and development programs, outbreaks of infectious diseases caused by toxins, and publications. Several proposals to include equal representation of women in various activities also were removed from the text.

Proposals that did remain in the final document requested states-parties to promote universalization of the convention and renewed the mandate of the ISU, which conducts the BWC Secretariat’s substantive and administrative functions. After years of requests, the conference agreed to increase the staff from three persons to four for 2023–2027.

In comments after the final document was adopted, the Algerian representative, Lazhar Soualem, spoke for many in the conference room, saying, “Despite our high expectations and ambitions, we consider this compromise document as an important step forward.” Most delegations said the document will provide a good basis for future progress on the proposals that were not adopted but had gained so much support at the conference.

The Cuban representative, Rodolfo Benítez Verson, said the BWC’s main weakness is the lack of a verification mechanism and expressed support for the working group to strengthen the convention. The Chinese representative, Li Song, said the document represents a major breakthrough to strengthen the convention and a victory for multilateralism, although he regretted that the Tianjin Guidelines were left out. The Mexican delegate, Fernando Israel Espinosa Olivera, expressed disappointment that the conference did not mention COVID-19 or take decisions on “more mature, daring proposals” on such issues as preparedness and strengthening biosecurity.

Although the Russian representative, Konstantin Vorontsov, welcomed the final document, he blamed an unnamed country, presumably the United States, for blocking consensus on Part II. Russia “will not agree to pathogens and transmitters by foreign military agencies near our border. This one country has blocked a legally binding protocol with a verification mechanism so that they can continue military activities around the world,” he said.

The U.S. representative, Kenneth Ward, said he was pleased that states-parties came together for the adoption of the final document but that this “soon fell apart.” He said the Russian statement shows that “the great and long suffering people of Russia are not threatened by the United States or the West; they are only threatened by [President Vladimir] Putin’s government, driven by lies, hatred, and warmongering.”

The U.S. delegation then walked out of the conference room. Several more delegates spoke after the United States left, expressing both pleasure and regrets over the outcome. Bencini concluded, “We should be proud of this document.”

3. Convention on the Prohibition of the Development, Production and Stockpiling of Bacteriological (Biological) and Toxin Weapons and on Their Destruction, April 10, 1972, 1015 U.N.T.S. 163, art. X.

Jenifer Mackby is leading a project on establishing a scientific advisory body for the Biological Weapons Convention. She has worked for a number of organizations on nonproliferation, international security, and verification issues. Sruthi Katakam is a Herbert Scoville Jr. Peace Fellow at the Federation of American Scientists and a recent graduate from Johns Hopkins University.