The director-general of the International Atomic Energy Agency (IAEA) met the presidents of Ukraine and Russia to press for the establishment of a zone of protection around the Zaporizhzhia nuclear power plant, but new Russian claims on the Ukrainian facility likely will complicate these efforts. 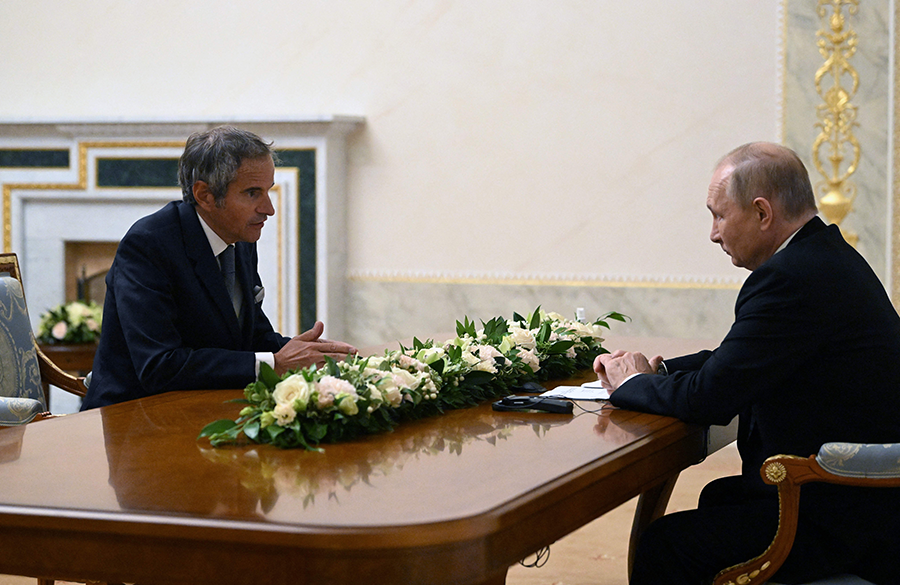 In an Oct. 11 press release, the IAEA said that Director-General Rafael Mariano Grossi, who visited Kyiv on Oct. 6 and St. Petersburg on Oct. 11, engaged in “intense consultations” with Ukraine and Russia over establishing the protection zone and emphasizing the urgency of the situation. The agency did not indicate what barriers remain to reaching an agreement, but Grossi was quoted as saying, “We can’t waste any more time.”

Prior to Grossi’s arrival in Moscow, attacks in the vicinity of the Zaporizhzhia power plant again severed the power lines connecting the facility to external power sources. Although the lines were restored within days, Grossi called the attack “tremendously irresponsible” and said on Oct. 9 that the situation remains “untenable.” The nuclear reactors were not operating at the time, but the plant relies on external power to run the cooling systems that prevent the reactor units from melting down. (See ACT, October 2022.)

Grossi’s visits to Kyiv and St. Petersburg followed Russian President Vladimir Putin’s announcement that Russia was federalizing the Zaporizhzhia plant. In an Oct. 5 statement, Russian Deputy Foreign Minister Sergey Vershinin said that Zaporizhzhia is “now on the territory of the Russian Federation” and should be “operated under the supervision of our relevant agencies.” He said Russia’s decision “is designed to ensure the safe operation of the nuclear power plant.”

Moscow also claimed to have annexed the Zaporizhzhia region and other areas, under varying degrees of control of the Russian military, after a September referendum, which has been widely denounced by the international community as illegitimate and having no legal effect.

In response to the federalization announcement, Petro Kotin, the head of Ukraine’s energy agency Energoatom, reiterated that the plant will “work under Ukrainian law, within the Ukrainian energy system.”

An individual who worked in Ukraine’s energy sector told Arms Control Today in an email on Oct. 13 that there is a “near zero chance” that the IAEA will be able to negotiate a zone of protection around the Zaporizhzhia power plant after Russia’s “illegitimate federalization” of the facility. Putin will not want to face any restrictions on territory he now claims is part of Russia, the source said, even though Moscow has an interest in preventing further damage to the Zaporizhzhia site. Russia plans to connect the reactors to the power grid in Crimea, but it is not clear it will have the technical capacity to do so without the help of Ukrainian personnel. (See ACT, September 2022.)

After the federalization announcement, Russia said it was planning to restart two of the six reactors. A new four-person IAEA team arrived at Zaporizhzhia on Oct. 7 to relieve the prior agency team monitoring the facility. The new team confirmed on Oct. 14 that preparatory activity to restart one of the reactors had commenced but the restart would take “a number of days.” 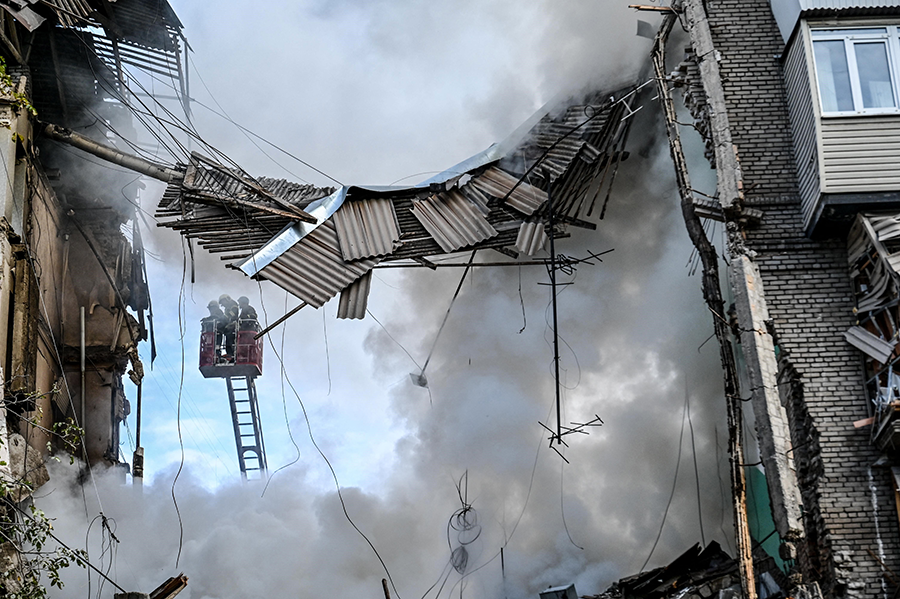 Although Russia attacked the nuclear power plant in March and has occupied it since then in violation of international law, Ukrainian personnel have continued to operate the plant under significant duress. After the Ukrainian head of the Zaporizhzhia team, Igor Murashov, was kidnapped by the Russians in early October and held before being released, Kotin said the plant’s operations would be directed from Energoatom’s central offices. Grossi said Murashov’s absence had an “immediate and serious impact on decision-making in ensuring the safety and security of the plant.”

To solidify its hold on the nuclear power plant, Russia is demanding that the Ukrainian plant operators sign new employment contracts with Rosatom, Russia’s state-run nuclear energy company. Grossi said the workers face “unacceptable pressure” due to the Russian demands. He said he has “made clear that the staff must be allowed to carry out their vital tasks without undue interference or pressure.”

Laura Holgate, the U.S. ambassador to the IAEA, referred to the referendum as a sham. She reiterated that Zaporizhzhia and the power it produces “rightfully belong to Ukraine.”

During the IAEA General Conference on Sept. 26, Anna Moskwa, the Polish minister for climate and the environment, called for suspending Russia’s membership from the agency if Russia does not “leave all Ukrainian power plants immediately.” If suspension does not work, “let’s kick them out” of the IAEA, she said, noting that the IAEA is about “safety and security of nuclear technologies” and Russia’s actions are a “test of credibility” for the agency.

Russia and Ukraine also used the IAEA meeting to trade accusations. In a statement on Sept. 26, Ukraine said that Russia is a “nuclear terrorist state” and the only country that “shells facilities” at the Zaporizhzhia nuclear power plant and “terrorizes and tortures” its employees. Ukraine called for IAEA member states to “use all levers of influence” to stop Russia’s occupation of the nuclear facility.

In its Sept. 26 statement, Russia denied responsibility for the attacks on Zaporizhzhia, instead blaming Ukraine for attacking the power plant and sabotage groups for targeting power lines. Russia has no armed forces at the site, only national guard personnel performing security duties, the statement said. Moscow believes that “assurance of nuclear safety and physical protection” is an “absolute priority,” the statement added.

Although IAEA member states did not take direct action against Russia during their meeting, they adopted a resolution on nuclear security that specifically referenced the risk posed to Ukraine’s nuclear facilities. The resolution did not mention Russia by name, but noted the “significant loss of control” over the Zaporizhzhia plant and the “negative consequences on nuclear security.” The resolution also recalled the “need to immediately cease all actions against and at nuclear facilities devoted to peaceful purposes.”

Russia attempted to block a vote on the resolution by walking out of the meeting and pressuring other states to do the same in order to prevent a voting quorum. Russia’s efforts failed, and the resolution was adopted on Sept. 30.