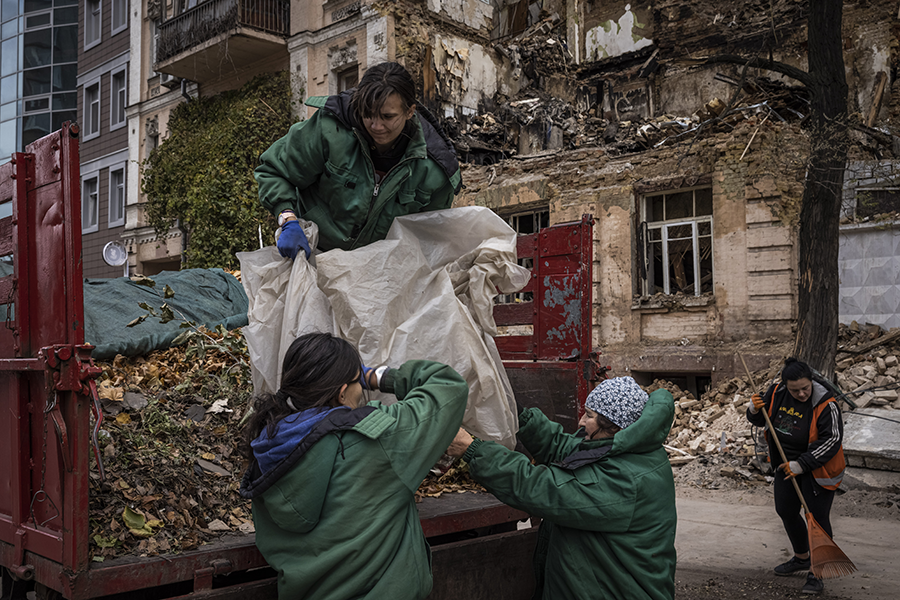 Last summer, Iran began delivering drones that loiter, then explode on impact with a target, for Russian use in Ukraine, according to U.S. officials.

On Oct. 18, Tehran upped its involvement by agreeing to provide Moscow with surface-to-surface missiles and many additional cheap drones, Reuters reported.

He described the Iranian presence as “relatively small” and said the goal appeared to be “to help the Russians use [drones] with better lethality” after early failures.

“We don’t believe it’s going to change the course of the war,” Kirby said of Russia’s drone use.

But he expressed concern that Iran may go farther and transfer advanced missiles to Russia, and as a result, the United States is looking “actively, right now” at possibly providing Ukraine with air defense systems to deal with the Iranian threat.

Ukraine and its Western partners expect that Iran will send Russia the Fateh-110, a mobile short-range ballistic missile, and the Zolfaghar, a Fateh variant.

The Pentagon is trying to speed the deliveries of National Advanced Surface to Air Missile Systems, according to CNN. The United States has committed eight of these systems to Ukraine. Raytheon Technologies CEO Greg Hayes told CNBC on Oct. 25 that his company recently delivered two of the defense systems to Ukraine and they were being installed.

“Russia’s use of these drones wears down Ukraine’s air defenses, putting stress on Ukraine’s supply lines and communications. Ukrainians are discussing items like the German Gepard as a successful system against these threats,” said Samuel Bendett, an expert on Russia’s use of unmanned and robotic military systems.

Iran’s sale of the missiles and drones to Russia constitutes a violation of UN Security Council Resolution 2231, which was adopted in support of the 2015 Iran nuclear deal known as the Joint Comprehensive Plan of Action. Under the resolution, Iran is banned from exporting ballistic missiles until 2023.

“[B]oth of the types of [drones] that…Iran had been provisioning to Russia meet the parameters under [limitations contained in the resolution] because they are capable of a range equal to and greater than 300 kilometers,” Vedant Patel, U.S. State Department principal deputy spokesperson, said on Oct. 18.

In recent weeks, Russia has launched air attacks on several Ukrainian cities by using missiles, Shahed-136 loitering munitions, and Mohajer-6 drones, according to Ukrainian officials and their Western partners.

Tehran and Moscow have denied that Iran is supplying weapons to Russia for use in Ukraine. “The hardware that is used is Russian.… It has Russian names,” said Kremlin spokesman Dmitry Peskov, according to TASS on Oct. 18.

The same day, Iranian Foreign Ministry spokesperson Nasser Kanaani said that claims about drone transfers are “based on false information and spiteful assumptions [that] are part of the targeted and political propaganda campaign waged by media of some countries against” Iran. He said Iran has been a neutral party to the war.

Russian attacks on Ukraine’s civilian centers, including Kyiv, and vital infrastructure have been terrorizing and destructive. Ukrainian President Volodymyr Zelenskyy tweeted on Oct 18 that, since Oct. 10, “30 percent of Ukraine’s power stations have been destroyed, causing massive blackouts across the country. No space left for negotiations with Putin’s regime.” According to the BBC, as much as 40 percent of Ukraine’s energy infrastructure has been damaged.

Responding to the Russian attacks, Ukraine requested an array of air defense systems and support training for Ukrainian operators from Israel, Axios reported.