With Russian nuclear threats as a backdrop, Polish President Andrzej Duda declared on Oct. 5 that his country would be willing to host U.S. nuclear weapons on its territory. 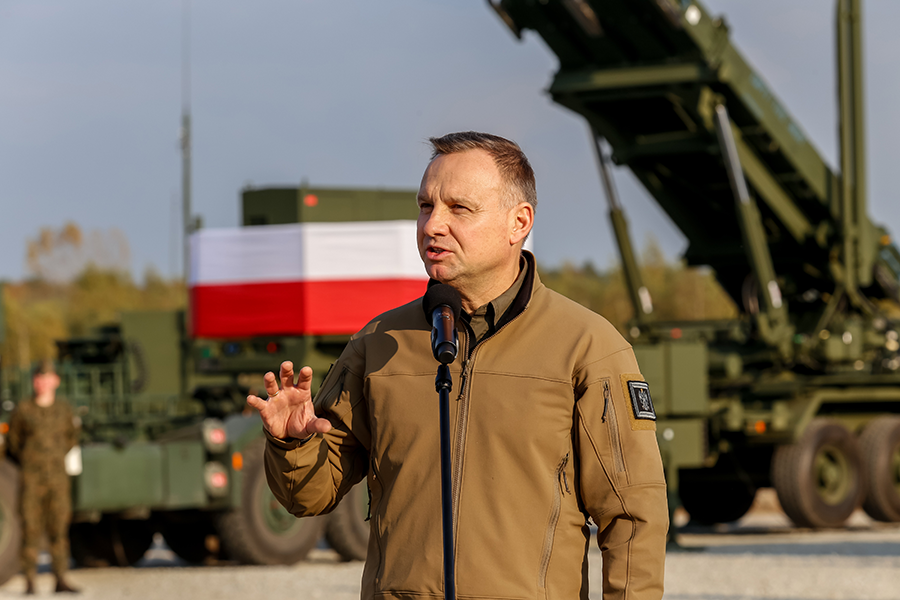 “There is always a potential opportunity to participate in the nuclear sharing program,” Duda said, according to a news report by Notes of Poland. “We have spoken with American leaders about whether the United States is considering such a possibility. The issue is open.”

Duda’s announcement came amid a series of threats by Russian President Vladimir Putin to potentially use nuclear weapons as the Russian military struggles with battlefield setbacks in its war on Ukraine.

But Washington dismissed the idea. “I can say that the United States has no plans to deploy a nuclear weapon on NATO member territory that had joined NATO post-1997,” Vedant Patel, a U.S. State Department spokesman, said on Oct. 6. Poland joined NATO in 1999.

Belgium, Germany, Italy, the Netherlands, and Turkey—all alliance members before 1997—host up to 150 U.S. B61 nuclear gravity bombs on their territories as part of the NATO nuclear sharing arrangement with the United States.

Any deployment of U.S. nuclear weapons to Poland would mean abrogating the commitments made under the NATO-Russia Founding Act, which stipulated that NATO has no intention, reason, or plan to deploy nuclear weapons or nuclear storage sites in the territories of states that joined NATO after 1997.

NATO leaders did not abandon the founding act during their 2022 summit in Madrid, but it was a subject of discussion. A NATO official told Arms Control Today at the time that NATO was looking at conventional deployments beyond the limits of the act. (See ACT, July/August 2022.)

The issue of Poland potentially hosting U.S. nuclear weapons is not new. In May 2020, Georgette Mosbacher, the U.S. ambassador to Poland, suggested that if Germany withdrew its nuclear partnership, then “perhaps Poland, which pays its fair share, understands the risks and is on NATO’s eastern flank, could house the capabilities.”

Russia and its ally Belarus have been discussing their own possible nuclear sharing arrangement in which Russian weapons would be located in Belarus.

Russia has used Belarus as a base from which to launch its air operations in Ukraine and as an operation staging ground for the unprovoked assault. At the start of the war, Belarus revised its constitution to renounce its non-nuclear status, thus allowing the prospect of hosting nuclear weapons on its territory.

Putin and Belarussian President Aleksandr Lukashenko have cited NATO’s nuclear sharing arrangement as justification for their recent deployments in Belarus. On June 25, Putin agreed to transfer to Belarus the nuclear-capable Iskander-M, a ballistic missile system that has been fielded by Russian ground forces since 2018. He also agreed to start retrofitting some Belarussian combat aircraft to make them nuclear capable and to train Belarussian pilots.

“Do you think it was all blather?” Lukashenko asked reporters on Aug. 26, according to the Associated Press. “All of it has been done.”

In the past, Lukashenko has said that he would offer to host Russian nuclear weapons if the United States moved U.S. atomic bombs from Germany to eastern Europe.