Ukraine shut down the remaining operational reactor at its Zaporizhzhia nuclear power plant in September amid increased fighting around the facility and deteriorating conditions for the plant’s workers. 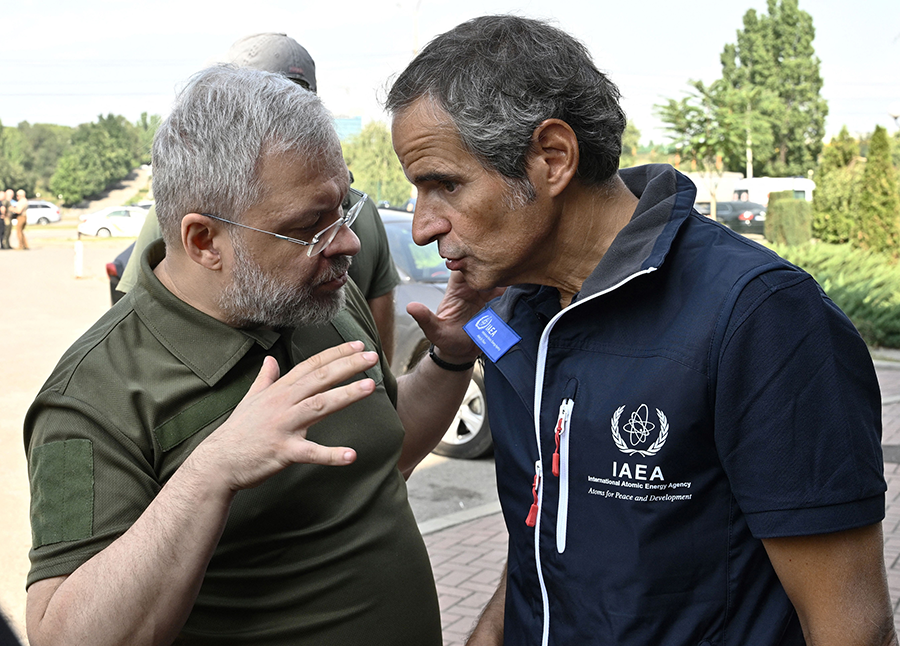 Although shutting down the reactors reduces the likelihood of a large-scale release of radiation in the event of further attacks or an accident, it does not eliminate the risk entirely. The site still needs external power to run the cooling systems that prevent the shuttered reactor units from melting down. Also, spent nuclear fuel is stored onsite and could release radiation if struck during an attack.

Multiple attacks severing the main and backup power lines for the plant, including during a period in September when it was completely without external power, underscored the precarious situation that Zaporizhzhia’s operators faced in trying to keep the reactors operating safely and the shutdown units cool.

Before Zaporizhzhia was reconnected to offsite power, Petro Kotin, the head of Ukrainian nuclear operator Energoatom, warned that operators would have to rely on diesel generators to cool the shuttered reactors after the last unit was shut down on Sept. 11. That unit had been providing power for the site. He described the generators as the “last line of defense before a radiation accident.”

The blackout underscored the continued risk posed by fighting in the area and led to renewed calls from world leaders to establish a no-fire zone around the Zaporizhzhia plant and for Russia to withdraw its military forces from the nuclear facility.

Rafael Mariano Grossi, the director-general of the International Atomic Energy Agency (IAEA) who visited the site on Sept. 3 with an agency team, said on Sept. 17 that the “power status has improved” but the “general situation for the plant located in the middle of a war zone remains precarious.” Members of the IAEA team remain at Zaporizhzhia to continue assessing the safety and security of the facility.

In a report on the site visit, the IAEA noted that “while past events had not yet triggered a nuclear emergency,” there is a “constant threat to the nuclear safety and security because critical safety functions” at the site could be impacted by continued shelling.

In the report, the IAEA renewed its calls to halt shelling immediately in the vicinity of Zaporizhzhia to avoid further damaging the plant and to establish a “nuclear safety and security zone.”

Grossi told reporters on Sept. 20 that he is engaged in talks with Russia and Ukraine about first establishing a zone of protection around the site and then pushing for demilitarization of the area. Grossi said he would not be deterred by Russia’s Sep. 19 announcement to mobilize new troops and urged Moscow and Kiev to agree to the protection zone “as soon as possible.”

The IAEA Board of Governors echoed the report’s call for Russia to cease all actions against Zaporizhzhia and all other nuclear facilities in Ukraine. In a resolution approved on Sept. 15, the board also denounced Moscow for its “persistent violation actions” against nuclear sites. Of the 35 states represented on the board, 26 supported the resolution, seven abstained, and Russia and China were opposed. The board passed a similar resolution on March 3 after Russia occupied the Chernobyl nuclear facility. (See ACT, April 2022.)

In expressing support for the resolution, Laura Holgate, U.S. ambassador to the IAEA, said on Sept. 15 that “Russia alone will be responsible for any resulting nuclear hazards, and Russia alone can prevent them by heeding international calls to remove its forces from those facilities and withdraw from Ukraine altogether.”

Russia continues to deny that it has attacked the Zaporizhzhia plant and blames Ukraine for shelling the facility. (See ACT, September 2022.)

Alexey Likhachev, head of the Russian nuclear energy operator Rosatom, accused the IAEA of allowing “a political component” to influence its work in Ukraine. He said on Sept. 18 that the IAEA knows “full well what is happening” and who is behind the attacks on Zaporizhzhia.

Although Russia attacked Zaporizhzhia and continues to occupy the nuclear site in violation of international law, it appears to have an interest in keeping the facility operational.

Kotin said that Russia has a “crazy idea” to connect Zaporizhzhia to the energy grid in Crimea, which Russia has occupied since 2014, and shared a plan to do so with Ukrainian personnel managing the nuclear power plant.

Rosatom has a presence at Zaporizhzhia, but it would likely be challenging for the energy corporation to operate the reactors and connect the power plant to the grid in Crimea without support from Ukrainian personnel working at the facility. The reactors were designed and largely constructed when Ukraine was part of the Soviet Union, but they have been extensively updated and modernized since then.

In addition to the threats posed by shelling, the IAEA has drawn attention to the extreme stress that the Ukrainian plant operators are facing and the negative impact that has on safety and security at the nuclear plant.

After shelling cut off electricity to the nearby town of Energodar, where many of the plant’s personnel live, Grossi said on Sept. 9 that given the “dire circumstances that the people of Energodar are facing, there is the significant risk of an impact on the availability of essential staff on site to continue to safely and securely operate” Zaporizhzhia.

He described the situation in Energodar and the lack of offsite power for the nuclear power plant as “completely unacceptable.” He added that the “dramatic development demonstrates the absolute imperative to establish a nuclear safety and security protection zone now.”

Although the situation at Zaporizhzhia poses the most serious risk for a radiation release, Energoatom said that Russian shells struck the South Ukraine Nuclear Power Plant on Sept. 19. A blast damaged transmission lines and buildings at the plant, but the reactors were not impacted and continue to operate, Energoatom said.

Grossi said the explosions at the South Ukraine Nuclear Power Plant “all too clearly demonstrate the potential dangers also at other nuclear facilities in the country” and that “any military action that threatens nuclear safety and security is unacceptable and must stop immediately.”