Iranian President Ebrahim Raisi said he is serious about reaching a deal with the United States to restore the 2015 nuclear deal, but Iran’s advancing nuclear program threatens prospects for reviving the accord if talks remain stalled until after the U.S. election in November. 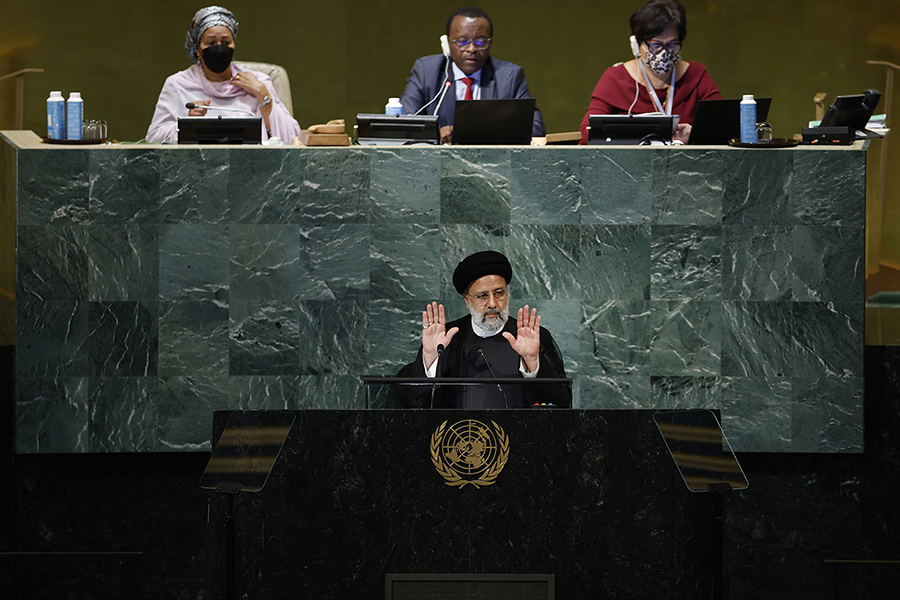 Iran and the United States, which have been negotiating indirectly through the European Union for the past 18 months, came close to reaching an agreement to restore the nuclear deal, known as the Joint Comprehensive Plan of Action (JCPOA), in August before new Iranian demands stalled progress.

In his address to the UN General Assembly on Sept. 21, Raisi said that the United States “trampled on the accord” and that Tehran cannot trust Washington to meet its commitments without “guarantees and assurances.”

In his address to the United Nations that same day, U.S. President Joseph Biden also reiterated his commitment to restoring the JCPOA if “Iran steps up to its obligations.” U.S. Secretary of State Antony Blinken said on Sept. 10 that the prospect for a deal in the “near term” is unlikely, but did not mention pausing talks until after the U.S. elections on Nov. 8.

EU foreign policy chief Josep Borrell said more explicitly that he expects the stalemate to continue given the “political situation” in the United States and that he does not “have anything more to propose” to break the impasse. Borrell also said he did not expect progress at the UN General Assembly session, despite Raisi’s presence and planned meetings with other states that are party to the JCPOA.

In a Sept. 20 meeting with French President Emmanuel Macron, Raisi criticized the European parties to the JCPOA for acting in an unconstructive manner, while Macron urged him to take the deal at hand. French Foreign Minister Catherine Colonna told reporters ahead of the meeting that there “will not be a better offer on the table and it’s up to Iran to take the right decisions.”

If talks remain stalled, Iran’s nuclear advances could deal a fatal blow to efforts to restore the accord. The fact that Iran’s diminishing breakout time, or the period it would take to produce enough weapons-grade material for a bomb, is less than 10 days does not appear to be influencing the Biden administration’s calculus on whether restoring the JCPOA remains in the U.S. national security interest. But irreversible research and development and gaps in monitoring are likely to influence U.S. thinking.

According to a Sept. 7 report from the International Atomic Energy Agency (IAEA), Iran is continuing to install and operate additional advanced centrifuges, which can enrich uranium more efficiently. The JCPOA prohibits Iran from producing enriched uranium with these advanced machines and strictly limits its production of the machines. The report also noted that Iran is continuing to experiment with the setup of its advanced centrifuge cascades, installing some in a way that allows a quicker switch between enrichment levels. The information that Iran gains from these processes cannot be reversed and dilutes the nonproliferation benefits of a restored accord.

France, Germany, and the United Kingdom said in a Sept. 10 statement that Iran’s advancing nuclear program has escalated “way beyond any plausible civilian justification.”

Gaps in IAEA monitoring of Iran’s nuclear program also put at risk efforts to restore the JCPOA. In the Sept. 7 report, the IAEA raised concerns about its ability to determine Iran’s inventory of centrifuges in the event of a restored nuclear deal. Inspectors have not had access to Iran’s centrifuge manufacturing facilities since February 2021, and in June 2022, Iran disconnected cameras at those sites that were collecting data for the agency to use to reconstruct a record of nuclear activity if the JCPOA is restored. (See ACT, July/August 2022; March 2021.)

Even if Iran cooperates and provides documentation about activities at the sites during the gap in monitoring, “considerable challenges would remain to confirm the consistency of Iran’s declared inventory of centrifuges,” the agency’s report said. The challenge in establishing a baseline inventory could complicate IAEA efforts to verify that Tehran is abiding by the JCPOA’s terms.

If talks resume, a deal is far from certain. In its most recent response to Borrell’s draft text, Iran included demands that the years-long IAEA safeguards investigation be closed by an earlier date than the EU proposed. Iran is also seeking assurances that the agency would not conduct future investigations into Iran’s nuclear past. But Borrell has little space to negotiate on the issues because the investigation relates to Iran’s obligations under the nuclear Nonproliferation Treaty to declare all nuclear materials and activities to the IAEA. Only the agency can determine if Iran has provided credible cooperation to explain the presence of the uranium that inspectors detected at three undeclared locations in Iran. The IAEA is also obligated to follow up on any credible evidence of undeclared nuclear materials in the future.

The Biden administration has made clear it will not pressure the agency to prematurely close the investigation but will support closing the file on Iran at the IAEA Board of Governors when the agency is satisfied. (See ACT, September 2022.)

The European nations involved in the negotiations (France, Germany, and the UK) said Iran’s failure to cooperate with the agency and its demands regarding the safeguards investigation “raises serious doubts as to Iran’s intentions and commitment to a successful outcome.”

The Iranian Foreign Ministry called the European statement “unconstructive,” while the Atomic Energy Organization of Iran (AEOI) criticized the IAEA characterization of the investigation. The AEOI said that “there are no disagreements over [Iran’s] calculated materials” and that “simply observing contamination in a few places cannot be considered as implying the presence of undeclared nuclear materials.”

But Iran has not provided any evidence to support its claim that the presence of uranium at the undeclared locations was a result of contamination, according to a May 30 report by the IAEA.

Although the IAEA board did not take action against Iran for failing to cooperate with the agency’s investigation during its Sept. 12–16 meeting in Vienna, France, Germany, the UK, and the United States issued a statement endorsed by more than 50 countries encouraging Iran to meet its safeguards obligations and address the IAEA’s questions.