The Pentagon plans to continue marching ahead with the rapid development and deployment of hypersonic weapons capabilities across its services, despite some setbacks in testing and questions about how effective they may be in warfare, according to the Biden administration’s budget proposal for fiscal year 2023. 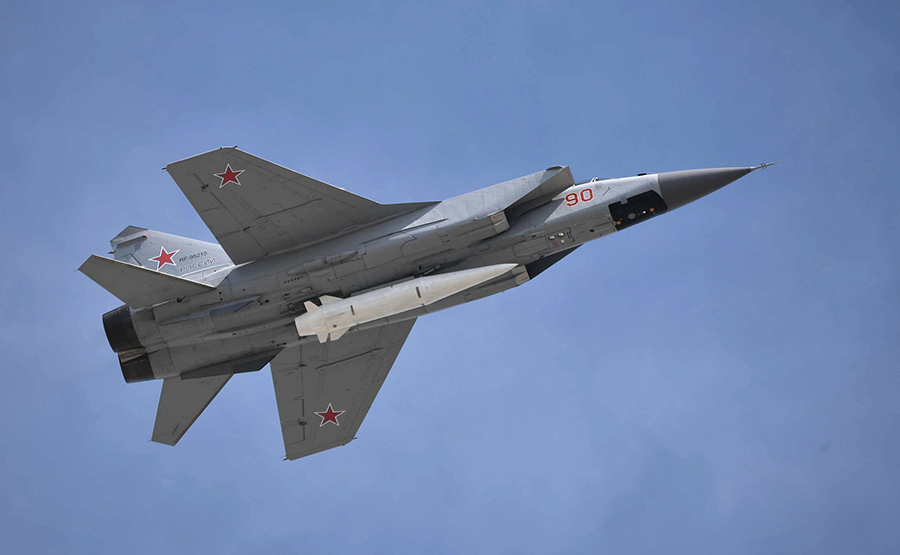 “The future security environment requires us to innovate across all domains and drives us to optimize our investments” in areas including hypersonic weapons, Adm. Chris Grady, vice chairman of the Joint Chiefs of Staff, told Congress on March 28. Michael McCord, the Pentagon comptroller, also testified that, in particular, “hypersonics are central to Pacific strategy.”

Russia became the first nation to use new hypersonic weapons in warfare with strikes featuring Kinzhal air-launched ballistic missiles against two locations in Ukraine in March. (See ACT, April 2022.) A Ukrainian military official said that Russian bombers also struck a “tourist infrastructure target” in Odesa in southwestern Ukraine with three Kinzhal missiles on May 9, but the Pentagon has not confirmed this account.

Overall, a senior U.S. defense official said on May 10, “We would assess at this time…76 days in or whatever it is, probably between 10 and 12” Russian hypersonic weapons have been used against Ukrainian targets.

Russia fielded the Kinzhal system in 2018, according to expert assessments, and the Avangard hypersonic boost-glide vehicle in 2019. The United States has at least five hypersonic weapons programs in the works across the Air Force, Army, and Navy, plus four programs underway at the Defense Advanced Research Projects Agency (DARPA). Although the United States is pursuing a conventional-only capability, China, which may have deployed its first hypersonic weapon in 2020, and Russia appear to be seeking nuclear or dual-capable hypersonic capabilities.

Given this, members of Congress and defense officials have claimed that Washington has fallen behind Moscow and Beijing and therefore endorsed efforts to accelerate U.S. hypersonic weapons development so as to deploy this capability as soon as possible and catch up with and eventually surpass China and Russia.

“We’re behind our adversaries” in hypersonics, Rep. Mike Turner (R-Ohio), a member of the House Armed Services Committee, said on April 5.

But after Russia used hypersonic weapons in Ukraine, Gen. Mark Milley, chairman of the Joint Chiefs of Staff, downplayed the initial influence of this capability on the battlefield.

“The Russians have used several hypersonic missiles,” Milley told Congress on May 11. “Other than the speed of the weapon, in terms of its effect on a given target, we are not seeing really significant or game-changing effects to date with the delivery of the small number of hypersonics that the Russians have used.”

Hypersonic weapons are defined as traveling at speeds at least five times the speed of sound with greater maneuverability over unique altitudes.

The Air Force has requested $162 million for the research and development of the Air-Launched Rapid Response Weapon (ARRW) system, one of the first U.S. hypersonic weapons scheduled to enter the field, in fiscal year 2023, which is a $157 million decrease from the 2022 appropriation. In the original budget documents, $47 million of the total ARRW system request was slated for procuring one ARRW system, but the service later decided against any procurement funding due to three test failures in 2021.

“As much as we are encouraged to have failures, we have to have success before we can move forward to production,” Air Force Secretary Frank Kendall told the Senate Armed Services Committee on May 3.

The ARRW system completed its first successful booster flight test on May 14, during which the booster “ignited and burned for expected duration” after separating from a B-52H bomber off the coast of California, according to an Air Force statement. The Air Force will conduct additional booster flight tests of the system in fiscal year 2022 and four all-up-round tests in fiscal year 2023, before transitioning to an early operational capability also in 2023. “Initial fielding and operational use…will be on the B-52 aircraft and have a 15-year shelf life,” the Air Force said.

The service also requested a second year of funding for a hypersonic weapons program called the Hypersonic Attack Cruise Missile of $317 million, a 67 percent increase from the 2022 appropriation. Vice Adm. Ron Boxall, director for force structure, resources, and assessment on the Joint Staff, told Congress on March 28 that the missile is slated to be fielded on F-15 fighter jets in 2027.

The Navy has two hypersonic weapons programs underway. The service requested $1.2 billion for the Conventional Prompt Strike system, a 9 percent decrease from the 2022 appropriation. This system features the common hypersonic glide body that is shared with the Army’s program and will be added to Zumwalt-class destroyers starting in 2025 and to Virginia-class submarines in 2028. The Navy also asked for $92 million for the Hypersonic Air-Launched Offensive Anti-Surface Warfare system and plans to field it in 2028.

Meanwhile, the Army is working on the Long-Range Hypersonic Weapon program, for which it requested $1.1 billion, including $807 million in research and engineering and $250 million for procurement. The system is slated to enter the field in fiscal year 2023.

DARPA is seeking $253 million for its multiple hypersonic weapons R&D programs, a $59 million increase from the 2022 appropriation. These programs include Glide Breaker, Tactical Boost Glide, and MoHAWC, for which it requested $18 million, $30 million, and $60 million, respectively.

The Hypersonic Air-Breathing Weapon Concept (HAWC) system, a hypersonic air-launched cruise missile, has been completed after flight tests in 2021. MoHAWC is the successor program, with Raytheon and Lockheed Martin as the prime contractors. Each company recently successfully tested its respective version of the HAWC system. (See ACT, May 2022.) Lessons learned from developing the earlier weapon will be incorporated into the MoHAWC cruiser design, according to the budget documents.

The tactical boost glide program will aim to conduct its third flight test in the upcoming fiscal year.

Glide Breaker, a design for a hypersonic defense interceptor, is budgeted for a 161 percent increase over its previous appropriation as the program enters a new phase that includes wind tunnel and flight testing.

Meanwhile, the Missile Defense Agency (MDA) requested $226 million for hypersonic missile defense activities, a 22 percent decrease from the previous year. This effort includes $149 million for a system to defeat a hypersonic missile in its glide phase, which involves the development of an interceptor and updates to the Aegis system to incorporate it. The MDA awarded contracts to three companies in 2021 to develop an interceptor prototype. (See ACT, January/February 2022.)

The agency requested $89 million for the Hypersonic and Ballistic Tracking Space Sensor (HBTSS) program, which is intended to be a new constellation of satellites for tracking hypersonic missiles in flight and guiding the proposed interceptor to its target. The request is down 67 percent from the 2022 appropriation because the satellite development is complete.

The SDA is similarly developing satellites for tracking hypersonic missiles as part of its “tracking layer” effort, for which the agency requested $500 million for fiscal year 2023 after Congress appropriated $550 million the previous year, despite no such ask from the agency. (See ACT, April 2022.)

The goal eventually is to integrate HBTSS and SDA satellites and place them within the Space Force’s overarching missile tracking architecture, MDA Director Vice Adm. Jon A. Hill explained in March, and the information gleaned during the upcoming fiscal year will help to determine the fate of the HBTSS program.

“We should have data coming down in the summer ’23 or so, and we’ll be able to help the Space Force make decisions,” Hill said.

The Space Force also requested $400 million to begin a “new resilient” missile warning and tracking system that will help “address emerging challenges such as hypersonic missiles and anti-satellite weapons.”