Russia’s recent attacks on nuclear sites in Ukraine have raised concern about the strength of international humanitarian law, which prohibits targeting nuclear power plants if the attack would cause severe harm to civilian populations. Russia’s decision to flout this norm also increases the possibility that states may target nuclear infrastructure in the future. 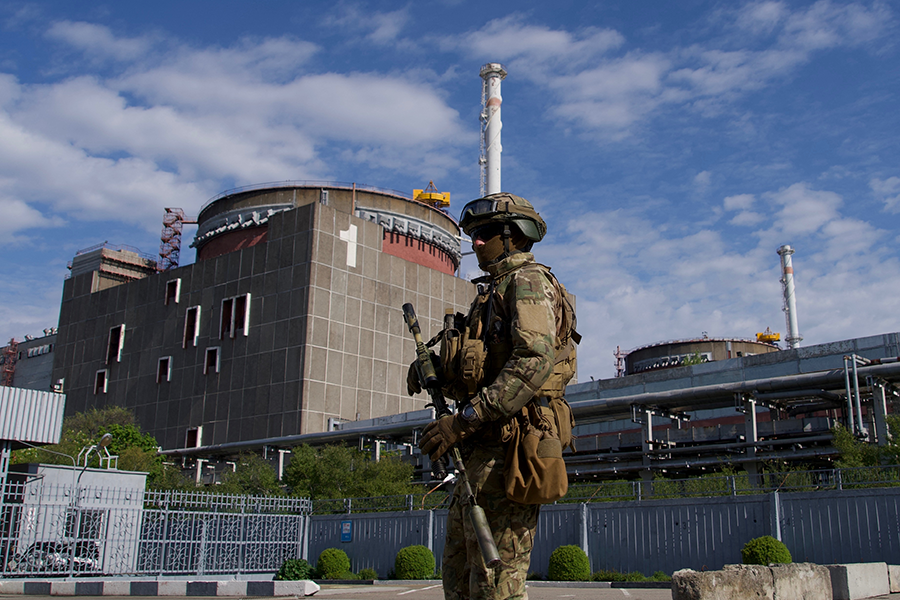 Since invading Ukraine, Russia briefly occupied and disrupted activities at Chernobyl, the site of the 1986 reactor meltdown, and still controls the Zaporizhzhya nuclear power plant, which includes six reactors.

When Russian forces attacked Zaporizhzhya in early March, they fired heavy weapons toward the reactor buildings and a facility that is used to store nuclear waste. Although reactors and spent fuel are housed in structures hardened to withstand attacks, the strikes still could have caused a reactor meltdown or a radioactive release by disrupting operations and support systems that are more vulnerable to damage.

The possibility of radioactive release causing severe harm to civilian populations, particularly in the case of the Zaporizhzhya attack, suggests that Russia’s actions may violate the 1977 protocols to the 1949 Geneva Conventions, which the International Committee of the Red Cross describes as the basis of international humanitarian law.

Protocol I of the Geneva Convention protects against the targeting of “installations containing dangerous forces,” including “nuclear electrical generating stations…if such attack may cause the release of dangerous forces and consequent severe losses among the civilian population.” It further prohibits the attack on military objectives “located at or in the vicinity” of these facilities if such an attack would cause severe harm to the civilian population.

Although Russia joined Protocol 1 in 1992, President Vladimir Putin withdrew in 2019. But Russia is still party to Protocol II, which repeats the prohibition on attacking nuclear power plants if it would result in severe harm to civilians.

Although the international community has broadly condemned Moscow’s targeting of nuclear facilities, the calls for Russia to cease military activity around Ukrainian nuclear infrastructure does not appear to have had a restraining effect on Russian actions.

When Russian military forces first occupied Chernobyl, the International Atomic Energy Agency (IAEA) Board of Governors passed a resolution urging Russia to “immediately cease all actions against” Chernobyl and “any other nuclear facility in Ukraine.” The March 3 resolution also urged Russia to allow Ukraine to preserve full control over nuclear sites. The following day, Russia attacked the Zaporizhzhya nuclear power plant and continues to occupy the facility.

Russia’s refusal to adhere to the norm established by the Geneva Conventions protocols and to heed broad international calls to cease attacks at nuclear facilities suggests that Ukraine’s nuclear infrastructure will remain a target and that other states could look to attack or occupy nuclear sites in future conflicts to advance military objectives.

Other states with nuclear power programs are preparing for that risk. For instance, the week after Russia attacked Zaporizhzhya, Japanese Prime Minister Fumio Kishida announced that his government would examine whether existing defenses at his country’s nuclear power plants were sufficient. The announcement came after the governor of Fukui, Tatsuji Sugimoto, requested further defense forces for the prefecture, which includes several nuclear power plants.

Nuclear security may need to evolve to address this emerging risk because past efforts have focused largely on securing facilities against acts of terrorism and the theft of nuclear materials. Sigfried Hecker, former director of Los Alamos National Laboratory, noted in an April 21 interview with the Bulletin of the Atomic Scientists that after the Sept. 11 attacks, “concerns were focused on preventing nuclear terrorism by non-state actors.” He called the attack on Zaporizhzhya “an act of state-sponsored terrorism.” Although Russia and the United States have cooperated to combat global nuclear terrorism, now “we must be concerned about Russia committing nuclear or radiological terrorism,” he said.

The nuclear Nonproliferation Treaty (NPT) review conference in August could be a forum to begin discussions on strengthening the norm against targeting nuclear installations and condemning state-sponsored attacks on such facilities. But the conference outcome document must be approved by consensus, so it is unlikely Russia would agree to any language criticizing its actions.

Russia’s occupation of the Zaporizhzhya site raises further concerns about security, safety, and accountability for the nuclear material present there and for the well-being of the workers, who must continue operating the plant under the stress of the occupation.

IAEA Director-General Rafael Mariano Grossi said on May 11 that conducting safeguards activities at the site is “challenging, owing to the presence of Russian forces” and nuclear personnel. He called the situation “unsustainable” and expressed hope that he would be able to visit the facility soon.

The IAEA is also working with Ukraine to restore safeguards and monitoring at Chernobyl after Russian forces withdrew at the end of March.

Grossi confirmed on May 4 that “data from all unattended monitoring systems installed at [Chernobyl] has now been fully recovered,” but said on May 6 that there is “still much to do to restore Chornobyl to normal operation.”