“[My time at ACA] prepared me very well for the position that I took following that with the State Department, where I then implemented and helped to implement many of the policies that we tried to promote.”
– Peter Crail
Business Executive for National Security
June 2, 2022
U.S. Defense Officials Balk at Biden’s Nuclear Budget

Top U.S. defense officials disagreed publicly with some Biden administration decisions to strip funding for nuclear capabilities from its $813 billion fiscal year 2023 request for national defense, while Republicans in Congress attacked the budget proposal as dangerously insufficient to keep pace with China, Russia, and inflation. 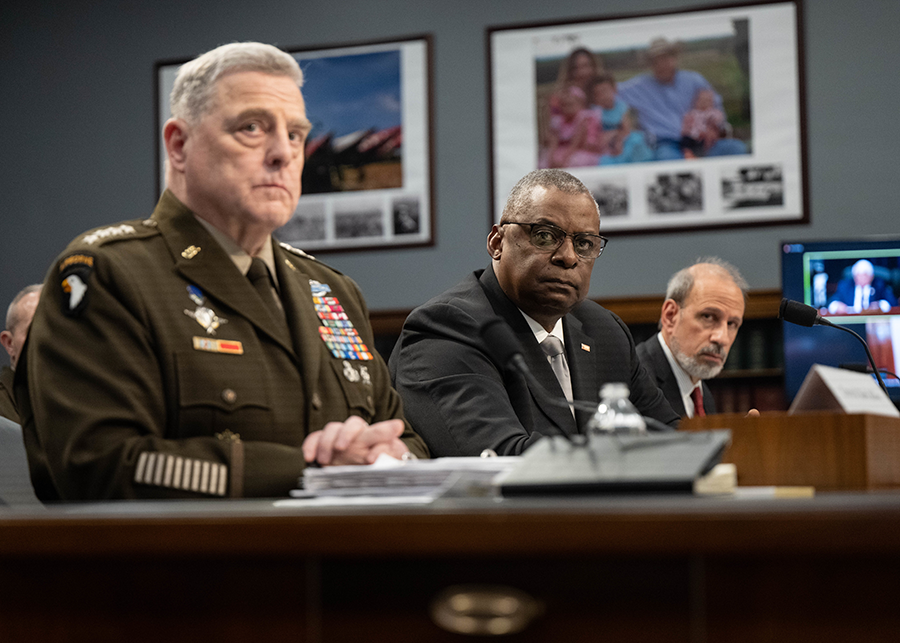 “This budget funds modernization of all three legs of the nuclear triad to ensure that we continue to maintain a safe, secure, and effective nuclear deterrent,” Defense Secretary Lloyd Austin said following the release of the detailed budget documents on March 28. Of the topline amount proposed for national defense, $773 billion is earmarked for the Pentagon.

Sen. James Inhofe (R-Okla.) criticized the request for making “cuts to key capabilities” in the U.S. nuclear arsenal, meaning that “we will lose ground against China’s and Russia’s rapidly expanding arsenals.” He wrote a letter signed by 40 Republicans on March 23 demanding that the Biden administration focus investment on nuclear modernization and boost the budget by 5 percent over inflation.

The White House eliminated funding in 2023 for the new nuclear-armed sea-launched cruise missile (SLCM), which the Trump administration proposed in its 2018 Nuclear Posture Review (NPR). According to news reports, the Biden administration’s version of the NPR reflects this decision. (See ACT, April 2022.) The White House sent a classified version of its NPR to Congress on the same day as it released its budget, but an unclassified version has not been made public.

“The marginal capability that [the nuclear SLCM] provides is far outweighed by the cost,” Austin told Congress on April 4. Navy Secretary Carlos Del Toro agreed with the administration’s decision. “I believe that we should zero out the SLCM line,” he said on May 12, adding that “the president has all the tools in his tool kit necessary to deter and deal with the threat.”

But three other leading U.S. defense officials—Chairman of the Joint Chiefs of Staff Gen. Mark Milley, Commander of U.S. Strategic Command Adm. Charles Richard, and Commander of U.S. European Command Gen. Tod Wolters—testified to Congress that the Pentagon should continue developing the weapon.

“My position on [the nuclear SLCM] has not changed,” Milley told the House Armed Services Committee on April 5. “My general view is that this president or any president deserves to have multiple options to deal with national security situations.”

Richard, who wrote a letter to lawmakers on April 4 supporting the nuclear SLCM, said in an April 4 hearing that, “[w]ithout this capability, adversaries may perceive an advantage at lower levels of conflict that may encourage limited nuclear use.” Wolters concurred with Richard’s assessment.

Another nuclear capability likely on the chopping block is the megaton-class B83-1 gravity bomb. According to press reports, the Biden NPR is expected to make the case for cancelling plans to extend the life of the bomb, which was initially slated to be retired around 2025 before the Trump administration moved to keep it in the arsenal.

Budget documents for the National Nuclear Security Administration (NNSA) do not clarify funding for the gravity bomb. Experts believe that although there appears to be some sustainment funding for the B83-1 to ensure its safety and reliability over the next year, there are no funds for a full life extension program. In fiscal year 2022, Congress appropriated $98.5 million for the bomb’s sustainment and alteration.

Overall, the Biden administration proposed to spend $50.9 billion on nuclear weapons in 2023, with $34.4 billion for the Pentagon, which leads in building nuclear delivery systems, and $16.5 billion for the NNSA, a semiautonomous agency within the Energy Department, that builds and maintains nuclear warheads. These accounts consume 6.5 percent of the total national defense budget and reflect an 18 percent increase from the previous fiscal year’s spending.

The Pentagon described its request as necessary to implement the 2022 National Defense Strategy, which, according to the unclassified factsheet released on March 28, identifies China as the department’s “pacing challenge” and Russia as an “acute” threat. The factsheet outlines the Pentagon’s aim to implement integrated deterrence, which officials describe as being supported by the U.S. nuclear arsenal.

“Nuclear weapons continue to provide foundational strategic deterrent effects that no other element of U.S. military power can replace,” Vice Adm. Ron Boxall, director for force structure, resources, and assessment on the Joint Staff, told Congress in March. “A safe, secure, effective, and credible nuclear deterrent is the ultimate backstop to protect the American homeland and our allies.”

Richard also said that “the absolute minimum that we need to do is to recapitalize the triad, the nuclear command and control, and the nuclear weapons complex” to counter China and Russia. “What we have today is the absolute minimum, and we are going to have to ask ourselves what additional capability, capacity, and posture do we need…based on where the threat is going,” he said.

The National Defense Strategy encompasses the NPR and the Missile Defense Review, which are all Defense Department documents. The White House is in charge of producing the National Security Strategy, which guides the Pentagon documents. It has not been released.

In general, the Biden administration’s budget proposal continues plans started during the Obama administration to replace components of all three legs of the nuclear triad, while halting a few programs added by the Trump administration.

The Navy requested $6.2 billion for construction and continued research and development on a fleet of 12 Columbia-class ballistic missile submarines, a $1.1 billion increase from the 2022 appropriation. This amount “will provide the third and final year of incremental full funding” for the first submarine, to be delivered in 2028, and enable advanced procurement of future submarines of this class, according to the budget documents.

Meanwhile, the Air Force proposed $5 billion for the B-21 Raider strategic bomber, up $2 billion from the previous appropriation. The service announced in September that five out of an estimated 100 planned bombers were in production and expected to achieve operational status in the mid-2020s.

The Air Force requested $981 million for the long-range standoff weapon system to replace the existing air-launched cruise missile (ALCM), a 64 percent increase over the 2022 appropriation of $599 million. The total includes the first request for procurement funding at $31 million.

Another Air Force program, the Ground-Based Strategic Deterrent, renamed the Sentinel in April, was budgeted at $3.6 billion, a $1 billion increase from the last appropriation.

The service plans to buy more than 650 new Sentinel missiles to begin replacing the fleet of 400 Minuteman III intercontinental ballistic missiles (ICBMs) in fiscal year 2029, with testing starting in 2024. The Pentagon solicited a study by the Carnegie Endowment for International Peace on potential alternatives for the land-based leg of the nuclear triad. The study was to be completed by the end of January 2022, but has not been made public.

Although the Army does not have nuclear weapons in its arsenal, after the 2019 U.S. withdrawal from the 1987 Intermediate-Range Nuclear Forces Treaty, the service announced its pursuit of a conventional, ground-launched, midrange missile capability that would have likely been prohibited under the accord. The budget documents renamed this capability the Strategic Mid-Range Fires program, for which the Army requested $404 million, $118 million more than the 2022 appropriation. The weapon will be based off the Navy’s Standard Missile-6 and Tomahawk cruise missile.

The NNSA budget request includes $241 million for another controversial program proposed by the Trump administration and continued by the Biden administration: the new high-yield submarine-launched ballistic missile warhead (W93). The request is a giant increase from the $72 million appropriation in 2022. The Pentagon is also seeking $97.1 million for the warhead’s associated aeroshell, up from $62 million the previous year.

In addition, the administration asked for continued funding for the B61-12 gravity bomb, the W87-1 ICBM warhead, and the W80-4 ALCM warhead upgrade at $672 million, $680 million, and $1.1 billion, respectively. The budget documents revealed planning for a future strategic warhead, with proposed spending starting in fiscal year 2027 at $70 million.

The NNSA budget includes $2.3 billion for plutonium pit production at the Los Alamos National Laboratory and Savannah River Site. The Trump NPR in 2018 and Congress in 2019 called for the NNSA to produce at least 80 pits a year by 2030, even though experts questioned the feasibility of this goal due to cost and past performance.

For the first time, the NNSA has acknowledged that this goal cannot be met. “No additional amount of money will get 80 pits per year in 2030,” NNSA Administrator Jill Hruby told Congress on May 4, adding that the agency will nevertheless still work to make more pits and reach this goal “post-2030.”

In another first, the Pentagon did not seek funds for a layered homeland missile defense system, after two consecutive years of requesting funding that Congress judged was not needed. The Missile Defense Agency (MDA) had plans to adapt the Aegis missile defense and the Terminal High Altitude Area Defense (THAAD) systems, both designed to defeat short- and intermediate-range missiles, to intercept limited ICBM threats, which is the aim of the Ground-Based Midcourse Defense (GMD) system based in Alaska and California.

The budget documents noted the elimination of the layered homeland defense program from the MDA request and, in the case of Aegis, specified that there are no plans to request funding in the coming years.

Reporters asked MDA Director Adm. Jon Hill about the future of layered homeland defense during a March 28 briefing, but he skirted the question, suggesting the answer will be featured in the Missile Defense Review, which has yet to be released in an unclassified format.

The overall proposal for the GMD system came in at $2.8 billion. This includes $68.9 million to improve the reliability and performance of the existing Ground Based Interceptors (GBIs) and $1.8 billion for the Next Generation Interceptor (NGI). The MDA plans to begin supplementing the existing 44 GBI missiles with 20 NGI missiles no later than 2028 to bring the fleet total to 64. The NGI request is a 107 percent higher than the 2022 appropriation of $884 million.

Meanwhile, the Pentagon also budgeted $342 million for the Cooperative Threat Reduction program, which is aimed at reducing threats from weapons of mass destruction and related challenges, including the spread of dangerous pathogens such as the coronavirus. This is a slight decrease from the previous year’s appropriation, but in the last two fiscal years, Congress significantly boosted the program above the requested amount, leaving open the possibility lawmakers may do so again.