“Your association has taken a significant role in fostering public awareness of nuclear disarmament and has led to its advancement.”
– Kazi Matsui
Mayor of Hiroshima
June 2, 2022
U.S. Cites Arms Control Compliance Concerns

Iran, Myanmar, Russia, and Syria have failed to uphold their commitments under the treaty banning chemical weapons, the U.S. State Department said in its annual compliance report on international nonproliferation and disarmament agreements and commitments released in April. 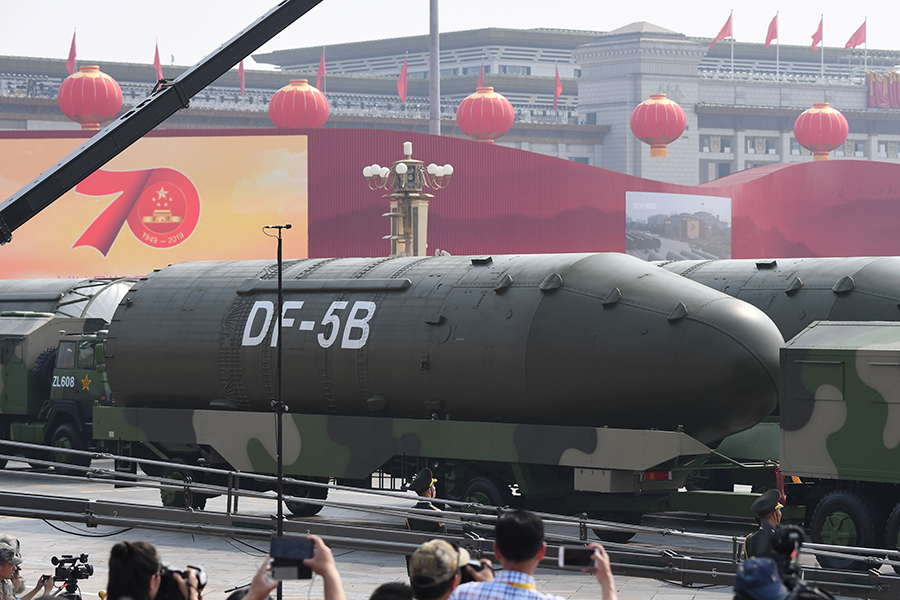 The report, covering activities in 2021, reaffirmed U.S. concerns about activities at nuclear test sites in China and Russia and determined that North Korea and Syria have failed to comply with their obligations under the nuclear Nonproliferation Treaty (NPT).

Although there are questions regarding transparency, the report reaffirmed that “Iran is not currently undertaking the key nuclear weapons-development activities…necessary to produce a nuclear device.”

But Iran has continued to develop stocks of enriched uranium that are vital to produce sufficient fissile material for a nuclear weapon, as it has since after the United States withdrew from the 2015 Iran nuclear deal. The report also found that “Iran’s continued failure to fully cooperate with the [International Atomic Energy Agency (IAEA)] ongoing safeguards investigations raises concerns with regard to Iran’s compliance with its obligation to accept safeguards” under the NPT.

In a separate report monitoring international compliance with the Chemical Weapons Convention (CWC), the State Department said that “Russia retains an undeclared chemical weapons program and has used chemical weapons twice in recent years,” referring to the assassination attempts on Russian opposition leader Alexei Navalny in Russia and Sergei and Yulia Skripal in the United Kingdom. Sergei Skripal is a former Russian military intelligence officer.

The supplementary report was unable to reach a conclusion regarding whether China has fully met its obligations under the CWC due to China’s research into pharmaceutical-based agents and toxins with potential dual-use applications. The State Department also found that Russia, China, and North Korea have failed to comply with their commitments under the treaty prohibiting the use of biological weapons.

In regard to the Comprehensive Test Ban Treaty, the main report said the United States continues to adhere to a zero-yield standard. Although there were no new compliance developments involving Russia in 2021, the department repeated previous concerns that Russia “conducted supercritical nuclear weapons tests since renewing its nuclear explosive testing moratorium in 1996 and [that] concerns remain due to the uncertainty relating to activities at Novaya Zemlya,” one of two major former Soviet nuclear test sites. As for China, the reports identified no new compliance issues, but concerns remain about activities at the Lop Nur Nuclear Test Site.

Meanwhile, Syria and North Korea remain in outright violation of their NPT obligations. In Syria’s case, this includes refusing to provide any substantive information to the IAEA about the Al-Kibar reactor that was destroyed during an Israeli airstrike in 2007.

As for North Korea, the State Department said, “Irrespective of one’s interpretation of whether or not [North Korea’s] 2003 notice of withdrawal from the NPT became legally effective, [North Korea] remains subject to IAEA safeguards obligations” and has failed to comply.

China also has failed to adhere to its November 2000 commitment not to assist any country in developing nuclear-capable ballistic missiles. “In 2021, the United States imposed sanctions against three [Chinese] entities pursuant to the Iran, North Korea, and Syria Nonproliferation Act for transfers of proliferation-sensitive goods and technology,” the report said, without giving more details.

Russia was found in compliance with its obligations under the New Strategic Arms Reduction Treaty and with its Presidential Nuclear Initiatives obligations. (See ACT, April 2022.) The initiatives are a set of arms control agreements regarding tactical nuclear warheads.

In terms of conventional arms control agreements, the 2022 report does not include a section on the Open Skies Treaty, in contrast to its 2021 iteration, because the United States officially withdrew from the accord in November 2020. (See ACT, December 2020.)

The report accused Russia of selectively applying provisions of the Vienna Document, an agreement about confidence- and security-building measures in Europe that provides for the exchange and verification of information, and criticized Russia’s failure to respond to Ukraine’s inquiry regarding the Russian military buildup near the Ukrainian border in 2021.

“As of December 2021, Russia continued and intensified its military build-up and aggressive rhetoric towards Ukraine. While further information about Russian activities in 2022 will be covered in detail in the 2023 report, the United States now knows the build-up was a prelude to offensive action against Ukraine,” the report states.