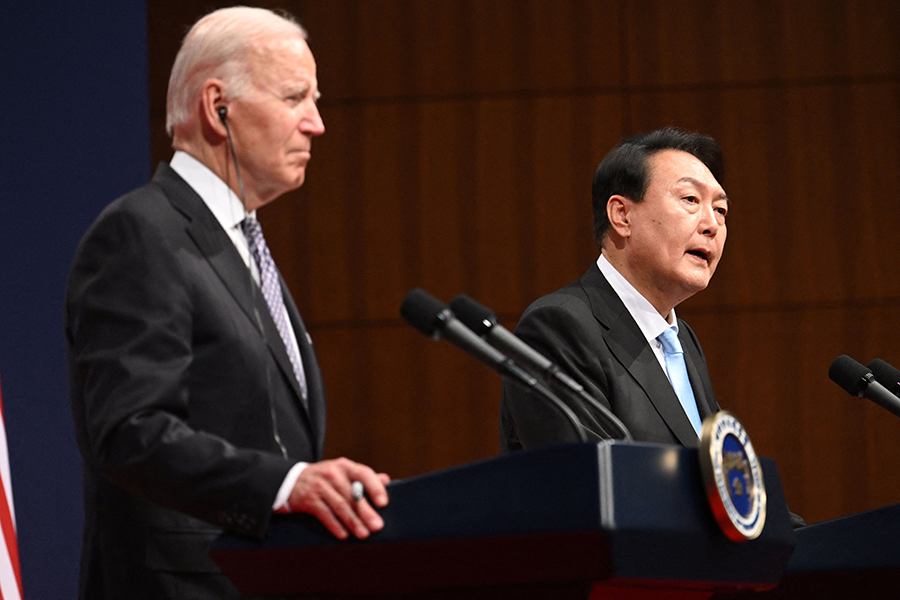 In his May 10 inaugural address, South Korean President Yoon Suk Yeol said that he is prepared to “present an audacious plan that will vastly strengthen North Korea’s economy and improve the quality of life for its people” if the North “genuinely embarks on a process to complete denuclearization.”

The “door to dialogue will remain open so that we can peacefully resolve” the threat that North Korean nuclear weapons pose to South Korea and the region, Yoon said.

But he did not call specifically for a resumption of negotiations with the North, a move that his liberal predecessor, Moon Jae-in, encouraged in his farewell speech. Moon said on May 8 that he hoped “efforts to resume dialogue between South and North Korea and establish denuclearization and peace would continue” under Yoon.

Moon’s meetings with North Korean leader Kim Jong Un in 2018 helped lay the groundwork for the historic summit between Kim and U.S. President Donald Trump in June 2018. (See ACT, July/August 2018.) Although bilateral dialogue between Moon and Kim yielded important advances, including military confidence-building measures along the Demilitarized Zone, Moon’s progress was hampered by U.S. and UN sanctions that prevented him from pursuing certain inter-Korean projects.

In his farewell address, Moon alluded to external factors as the reason why the inter-Korean process failed to achieve more, saying that there was a “barrier that we can’t overcome with only our determination.”

Even if Yoon were to make a more direct offer to resume talks with North Korea, it might not get anywhere. Kim ordered an aggressive lockdown in response to the country’s first COVID-19 outbreak in May. North Korea has conducted a total of 20 ballistic missile tests this year, including on May 24. That was right after U.S. President Joe Biden met Yoon in Seoul and displayed a somewhat tougher line toward North Korea. Together, these factors suggest that North Korea will continue to focus inward and ignore U.S. and South Korean overtures for negotiations.

While the Moon administration pursued diplomacy with North Korea, it extended the range of South Korean ballistic missile systems and began investing in other defensive systems, such as more advanced radar to detect incoming missile attacks.

The South Korean Agency for Defense Development announced on May 11 that Seoul completed the development of an advanced radar that can detect and track multiple incoming warheads and differentiate between warheads and other missile debris. The press statement said the system is necessary for “independent, domestic air defense operations” designed to counter the “increasing threat of ballistic missiles.”

South Korean missile developments are just part of a regional arms race that has accelerated over the past several years.

North Korea’s recent missile tests, the majority of which involved short- and medium-range systems, suggest that Pyongyang is responding to a changing regional security environment and to South Korean investment in missile defenses.

The new South Korean defense minister, Lee Jong-sup, said the security situation on the Korean peninsula is “extremely grave due to North Korea’s advancing missile threats and the possibility of a nuclear test.” He said South Korea’s military would respond “sternly and immediately” to any direct North Korean provocations.

U.S. Ambassador to the United Nations Linda Thomas-Greenfield said it was time for the international community to “stop providing tacit permission and start taking action.”

The council “has stayed silent” because two members argued that restraint will encourage North Korea to “stop escalating and instead come to the negotiating table,” but the opposite has happened, she said during a May 11 council meeting.

Thomas-Greenfield was likely referring to Russia and China, which have opposed new sanctions targeting North Korea, despite its persistent violations of Security Council resolutions.

She called for strengthening sanctions on North Korea, saying the body needs to “speak up now” and not wait for further illegal action by North Korea.