Iran and the International Atomic Energy Agency (IAEA) have agreed to adopt a “practical and pragmatic approach” to resolving outstanding safeguards issues and thus bring Iran back into compliance with its nuclear verification commitments, IAEA Director-General Rafael Mariano Grossi said following a trip to Tehran on March 5. 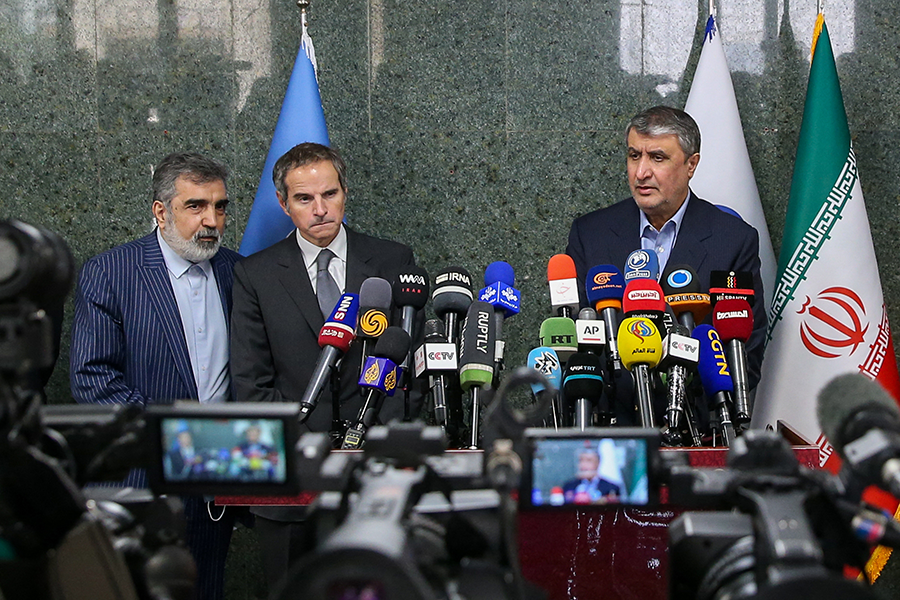 The two sides issued a statement outlining a series of steps that will guide Iranian-IAEA cooperation on safeguards disputes at three undeclared locations in Iran.

Although this arrangement is separate from diplomatic efforts by China, France, Germany, Russia, the United Kingdom, the United States and Iran to revive the 2015 nuclear deal, formally known as the Joint Comprehensive Plan of Action (JCPOA), the fate of the JCPOA is closely tied to Iran’s cooperation with the IAEA.

As a consequence of the Trump administration’s decision to withdraw from the nuclear deal in May 2018, Iran began to reduce its compliance with the JCPOA one year later. It eventually ceased implementing the additional protocol to its safeguards agreement, which provides extra tools so the IAEA can verify the peaceful use of nuclear materials, and a special monitoring arrangement that was intended to ensure that the IAEA maintained continuity of knowledge about Iran’s nuclear activities.

The IAEA is currently “flying blind” about the details of Iran’s activities at the three sites because it is unable to retrieve surveillance data being stored on the agency’s cameras. The IAEA’s ability to retrieve this data and reconstitute a full picture of Iran’s nuclear program is likely also contingent on the revival of the JCPOA. (See ACT, January/February 2022.)

The safeguards dispute pertains to pre-2003 nuclear activities, when Tehran had a nuclear weapons program. The IAEA concluded its investigation into these activities in 2015, but is obligated to follow up on evidence that points to undeclared nuclear materials and activities that Iran should have disclosed under its safeguards agreement. The IAEA is seeking information and clarification about the presence of undeclared uranium.

Initially, there were four undisclosed locations of concern in Iran. The IAEA recently concluded its investigation into the second of the four locations where natural uranium in the form of a metal disc may have been present, conducting verification activities at the site called Jabr Ibn Hayan Laboratories. Although the agency could not identify the disc, it also could “not exclude that the disc had been melted, re-cast and may now be part of the declared nuclear material inventory” at the laboratory. While explaining the decision at a press conference, Grossi said, “[W]e do not have enough questions that could sustain a process.” The agency is expected to reopen the case if it receives new information.

To clarify the remaining issues, the joint statement of the IAEA and the Atomic Energy Organization of Iran (AEOI) details a timeline of cooperation. Under that, by March 20, 2022, Iran was to provide written explanations to questions raised by the IAEA related to the three locations. Within two weeks of that happening, the IAEA will submit to the AEOI any questions on the received information; one week later, the IAEA and AEOI will meet in Tehran to discuss any remaining questions.

At that time, separate meetings will be held to consider each disputed Iranian location. Finally, Grossi will aim to report his conclusion to the IAEA Board of Governors meeting in June.

Although experts saw this agreement as a positive step, they said it is still possible that any lingering queries about the safeguards disputes could affect implementation of a revived JCPOA. Also, if the IAEA is not satisfied, then the other participants in the nuclear negotiations may have similar hesitations about implementing that deal.

Grossi said political pressure is not driving a solution. "We have to be left alone in our professional work and we will determine with the experts at the safeguards department," he said on March 5.