President Joe Biden has signed off on a $29 billion spending increase to his requested fiscal year 2022 national defense budget, a massive expansion that was approved alongside another $13.6 billion in emergency military and humanitarian aid for Ukraine as Russia’s deadly war on that country continues. 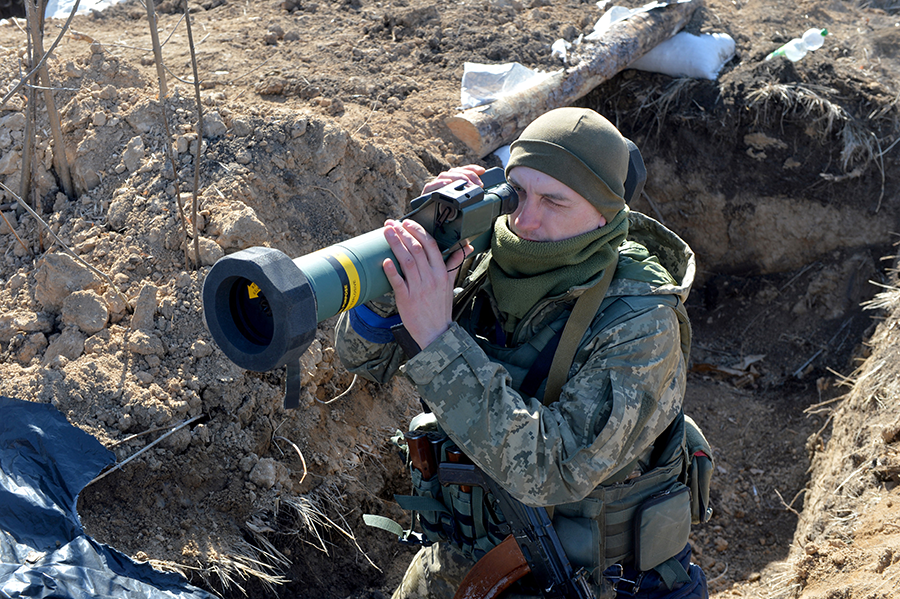 “We will make sure Ukraine has weapons to defend against an invading Russian force,” Biden said on March 11 before signing the legislation four days later. “We will send money and food and aid to save the Ukrainian people.”

The national defense total in the 2022 omnibus spending bill is $782 billion, a 3.9 percent increase over the administration’s request for 2022 and a 5.6 percent increase over the 2021 appropriations. (See ACT, January/February 2022; July/August 2021.) This total does not include the assistance for Ukraine, of which $6.5 billion is headed to the Pentagon for funding U.S. troop deployments to eastern Europe and restocking weapons that have been or will be sent to Ukraine.

“We are becoming witness to one of the worst humanitarian crises we have seen in generations, which is why this bill provides $13.6 billion in humanitarian assistance, defense support, and economic aid to help the Ukrainian people in their most desperate hour of need,” House Appropriations Committee Chair Rosa DeLauro (D-Conn.) said on March 9 in a floor speech.

Nearly six months after the start of fiscal year 2022, the House on March 9 passed the 12 appropriations bills needed to fund the government, including for defense, and energy and water, and the supplementary aid package for Ukraine, followed by the Senate on March 10. Congress approved and Biden signed the 2022 National Defense Authorization Act (NDAA) in December. (See ACT, January/ February 2022.) The NDAA authorized funding in the amount of $768 billion, while the appropriations bills stipulate actual spending levels.

Since the start of the fiscal year in October, Congress has passed multiple short-term continuing resolutions, which funded most programs and activities at the previous year’s spending level to keep the government open and prevent a shutdown.

The defense appropriations bill allocates $5.1 billion for the construction and continued research and development of what will ultimately be a fleet of 12 Columbia-class ballistic missile submarines. This is an increase of about $7 million above the authorized amount and $145 million above Biden’s budget request.

The appropriations bill, like the NDAA, fully funds the requests of $5.2 million and $10 million by the Defense and Energy departments, respectively, for the development of a new submarine-launched cruise missile (SLCM) and its associated low-yield nuclear warhead. The House Appropriations Committee zeroed out this funding in its version of the spending bills in an attempt to halt the controversial program kick-started by the Trump administration, but the final bills reinstated it.

In addition, the defense appropriations bill fully approved the Air Force’s request of $3 billion for the B-21 Raider strategic bomber program, including $108 million for initial procurement, as well as $2.6 billion for continued R&D plus initial missile procurement for the Ground-Based Strategic Deterrent (GBSD) program. The service plans to buy more than 650 new GBSD missiles to replace the current fleet of 400 Minuteman III intercontinental ballistic missiles (ICBMs) beginning in 2029.

The Air Force saw a slight decrease in its budget for the long-range standoff (LRSO) weapons program to replace the existing air-launched cruise missile. The final LRSO appropriation came to $599 million, which is a 2 percent decrease from both the administration’s request and the NDAA but a 56 percent increase from the 2021 authorization.

The Army, meanwhile, received its complete request of $286 million for the development of a conventional, ground-launched, midrange mobile missile capability, just as in the NDAA.

Despite the drive shared by defense officials and members of Congress to speed ahead with the development and deployment of conventional hypersonic weapons, the appropriations law ultimately canceled one program for an entirely new hypersonic capability and cut initial procurement for another capability.

The Air Force requested $161 million to purchase the first 12 Air-Launched Rapid Response Weapon (ARRW) hypersonic missiles during 2022, but the law halved the amount and redistributed the remaining funds to the ARRW program’s R&D budget, for an appropriation of $319 million. The ARRW system, a hypersonic boost-glide vehicle, was slated to achieve an initial operating capability this fiscal year, but failed three flight booster tests in 2021. In its explanatory statement accompanying the legislation, Congress ascribed its decision “to recent failures and delays in testing that have extended the ARRW program schedule and put a first production lot contract at risk for award in fiscal year 2022.”

Breaking with the general consensus, Air Force Secretary Frank Kendall recently has gone on the record with his skepticism of the ARRW program, which, he said on March 9, “still has to prove itself.”

Heidi Shyu, the undersecretary of defense for research and engineering, also admitted to Bloomberg on March 7 that although she is supportive of the ARRW program, the 2022 “operational capability date is a very aggressive schedule.” Shyu held another meeting with hypersonics industry executives in early March following a previous meeting, attended by Defense Secretary Lloyd Austin, a month earlier. (See ACT, March 2022.)

The service aims to add the CPS system to Zumwalt-class destroyers starting in fiscal year 2025 and to Virginia-class submarines in fiscal year 2028. Congress subtracted some funding as it assessed that, for both the integration of the CPS system onto Virginia-class submarines and the expansion of the industrial base, the dollars requested were “early to need.”

The budget for the Navy’s new hypersonic program, the Offensive Anti-Surface Warfare Increment II, was slashed entirely due to a “lack of program justification.” The Pentagon had requested $57 million, and Congress had authorized $34 million.

The Army’s hypersonic capability, the Long-Range Hypersonic Weapon (LRHW) system, received the full request for $111 million for procurement of additional LRHW batteries and a $14 million bump from the request and authorization for its R&D budget, to $315 million.

The spending bill also appropriated $194 million for the hypersonic programs overseen by the Defense Advanced Research Projects Agency, an 11 percent increase from the request and a 24 percent decrease from the authorization. These programs include the Glide Breaker, Operation Fires, Tactical Boost Glide, and Hypersonic Air-Breathing Weapon Concept programs. Congress increased the appropriated amount for the purposes of “hypersonics risk reduction.”

Meanwhile, the energy and water appropriations bill followed the NDAA’s lead by providing the requested funds for the B61-12 gravity bomb, the W87-1 ICBM warhead, and the W80-4 ALCM warhead upgrade at $772 million, $691 million, and $1.1 billion, respectively. The law also approved full funding for other controversial programs proposed by the Trump administration and continued by the Biden administration, including $134 million for the new high-yield submarine-launched ballistic missile warhead, the W93, and its associated aeroshell and $98.5 million for the megaton-class B83-1 gravity bomb.

The National Nuclear Security Administration, a semiautonomous agency of the Energy Department that maintains and modernizes the nuclear warhead stockpile, also received the requested $1.6 billion to increase the production rate of plutonium pits for nuclear warheads to at least 80 per year at two production sites.

Even so, Adm. Charles Richard, chief of U.S. Strategic Command, acknowledged on March 8 that “we now know we will not get 80 pits per year by 2030, as is statutorily required, and even unlimited money at this point will not buy that back.”

The appropriations law also funded the NDAA’s $105 million increase over the Biden request for the Cooperative Threat Reduction program, bringing the total to $345 million. This program is aimed at reducing threats from weapons of mass destruction and related challenges, including the spread of dangerous pathogens such as the coronavirus.