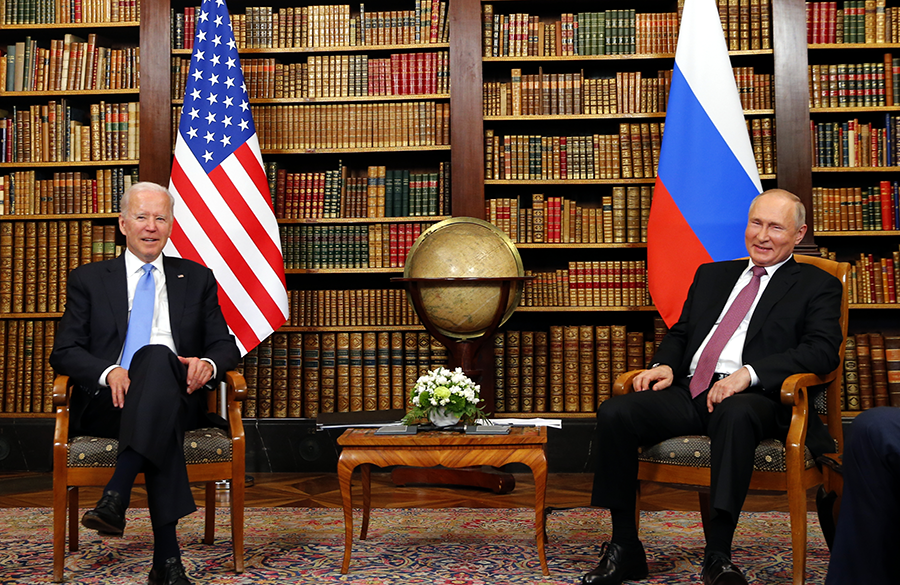 Such nuclear chest-beating, in conjunction with a hot war in the alliance’s immediate vicinity, is unprecedented. Russia’s attack on Ukraine marks the first time that nuclear blackmail has been used to shield a full-scale conventional invasion. Moscow thus has raised the nuclear stakes to new and dangerous levels. Fortunately, U.S. and NATO responses have been calm and measured, so far avoiding a dangerous escalatory spiral.

Any assessment of the implications of Putin’s policies for the nuclear order, arms control, and European security must be preliminary. The conflict is still unfolding. Putin could continue to leverage Russian nuclear weapons, raise the stakes further, or even go down in history as the first leader to use nuclear weapons to “win” a war of his own choosing. Major players are still repositioning themselves, including China. Although Russia finds itself with fewer allies, the degree of its isolation is yet to be seen. The full impact of Russian aggression will thus materialize over time. One thing is certain: The war will have serious, long-lasting effects on how the world views nuclear weapons, how it seeks to control them, and how Europe develops a new security structure.

The conflict will likely increase the salience of nuclear weapons. This development would be at odds with the 2010 commitment by all parties to the nuclear Nonproliferation Treaty (NPT) “to further diminish the role and significance of nuclear weapons in all military and security concepts, doctrines and policies.”1 States at the 10th NPT Review Conference, scheduled for August 1–26, will have to note the growing importance that nuclear-weapon states attach to nuclear deterrence. Attributing responsibility for the greater role of nuclear weapons will be contentious, creating a major obstacle for a successful review conference.

The growing importance nuclear-weapon states attach to their nuclear weapons will also complicate arms control. For example, U.S. proposals to include nonstrategic weapons in negotiations are less likely to resonate now with Russia, which compensates for the weakness of its conventional forces with a vast stockpile of 2,000 or so tactical nuclear weapons. This function will become more important because of the Russian military’s poor performance in Ukraine and Moscow’s inability to fix the problem because of Western economic sanctions. Even more disconcerting is the possibility that Russia might revert to chemical or biological weapons for asymmetrical deterrence.

NATO’s new strategic concept, to be agreed by alliance leaders at a summit this summer, will likely account for Russia’s increased reliance on its nuclear weapons. Even if Russia’s conventional capabilities do not pose the military threat once believed, Putin’s willingness to wage unprovoked war in Europe will strengthen the hands of those who favor increasing NATO’s reliance on nuclear deterrence.

It is not clear if Russia and the United States will resume their strategic stability dialogue to discuss a follow-on agreement to the New Strategic Arms Reduction Treaty (New START). Regardless, avoiding new nuclear arms races in Europe, including the possible deployment of highly destabilizing intermediate-range nuclear forces, will require a rethink of arms control priorities.

Another implication of Russia’s nuclear posturing is that nuclear-weapon states will have to urgently address the risks of nuclear escalation, inadvertent and intentional. This means nuclear arms control will return to its origins. The 1958 Surprise Attack Conference, a failed attempt to find ways to reduce the risk of a nuclear first strike, marked the beginning of modern arms control. Finding ways to prevent nuclear war will have to be the backbone of any future nuclear arms control agenda again.

Fortunately, neither side needs to start from scratch. Nuclear risk reduction had moved up on the arms control agenda even before the war in Ukraine. On the table exists a broad menu of measures to reduce nuclear dangers, ranging from better communication channels to taking weapons off high-alert status and separating warheads from delivery vehicles. In hindsight, it seems cynical that Putin at the 2021 Geneva summit with U.S. President Joe Biden reaffirmed the Reagan-Gorbachev formula that “a nuclear war cannot be won and must never be fought.” Such statements sound hollow today. Therefore, any future risk reduction steps will have to be tangible, verifiable, and probably reciprocal.

Both sides also should try to preserve “islands of cooperation” in order to avoid unnecessary, costly, and dangerous arms races and prevent the spread of weapons of mass destruction (WMD). During the Cold War, such islands did exist, particularly on nonproliferation. The 1968 NPT and the 1972 Biological Weapons Convention are among the most important examples.

Unfortunately, today’s Kremlin leadership appears less pragmatic than its predecessors and has dragged global nonproliferation accords into the conflict with the West. Even before its attack on Ukraine, Russia misused the Organisation for the Prohibition of Chemical Weapons to shield the perpetrators of chemical weapons attacks. Since the Feb. 24 onslaught, Moscow has attempted to leverage its role in talks on resuscitating the Iran nuclear deal, formally the Joint Comprehensive Plan of Action, to reduce the impact of U.S. sanctions imposed in response to Russia’s war on Ukraine. Most recently, Russia has launched baseless allegations against Ukraine and the United States related to biological weapons, weakening the taboo against the military misuse of biological agents. These lies will undermine the norms against weapons of mass destruction for years to come and place Russia outside the nonproliferation mainstream.

The international community should still try to keep islands of cooperation afloat, even if Russia does not want to live on them. As Rose Gottemoeller, chief U.S. negotiator for New START and former NATO deputy secretary-general, has said, “With Russia at best a less reliable partner, China’s role in the international arms control regime will become increasingly vital.”2 If Beijing is willing to work with others, it might be possible to isolate Moscow in multilateral forums. From this perspective, it is not helpful to frame the war in Ukraine as a struggle between autocracies and democracies. China and some of the other 35 states that abstained when the UN General Assembly on March 2 condemned Russia’s attack on Ukraine were not democracies. It is also important to remember that multilateral instruments have always been and, to some degree, must be blind to the political character of member states. The pursuit of cooperation on “global commons” priorities such as WMD nonproliferation must take that into account.

Another implication of the deadlock on the traditional step-by-step arms control process will be an increased focus on humanitarian arms control. Russia and other major powers have stayed away from some agreements that limit or prohibit weapons based on the humanitarian consequences of their use. For example, the 1997 Mine Ban Treaty and the 2008 Convention on Cluster Munitions are implemented without Russian or U.S. support. Particularly for the countries of the global South, humanitarian arms control will continue to provide almost the only opportunity to make progress on disarmament.

The war in Ukraine will likely have contradictory effects on the 2017 Treaty on the Prohibition of Nuclear Weapons (TPNW), which is also deeply rooted in the humanitarian tradition of arms control. On the one hand, Putin’s nuclear posturing, after four years of U.S. President Donald Trump’s “nationalist populism,”3 underscores that it cannot be assumed that nuclear weapons are safe in the hands of some states but not in others. This supports the argument of ban treaty supporters that, while seeking to reduce the risks of nuclear weapons use, the world must not lose sight of the fact that total disarmament is the only sustainable solution to the dangers posed by these weapons.

On the other hand, increased salience of nuclear weapons will slow global momentum toward the TPNW. This is particularly true in Europe, the stronghold of TPNW critics. Roughly three-quarters of all states opposed to the ban treaty are European nations. Scandinavian countries such as Finland, Norway, and Sweden have been flirting with the ban treaty, as has the new German government. Faced with the Russian war against Ukraine, these countries are less likely to stray from the NATO line, which remains adamantly opposed to the TPNW. Should Germany, Finland, Norway, or Sweden reverse their decision to attend to the first meeting of TPNW states-parties as observers, this would reduce their role as bridge builders in the global nuclear order. Reduced willingness to engage constructively with the TPNW would widen the global divide on nuclear weapons.

Putin’s Russia is a revisionist power. At least as long as Putin is in power, it will be impossible to develop a European security architecture with Russia as a partner. This statement must not be confused with advocacy for a policy aimed at regime change, but it has negative implications for conventional arms control in Europe and a range of other issues.

For Europeans, an important factor is where the political line between Russia, its allies, and the West will be drawn. This, of course, concerns the future of Ukraine as a free nation, but the outlook for Balkan countries and states and regions such as Moldova and Transnistria are not immediately clear either. Subregional arms control accords, such as the 1995 Dayton agreement, could become more important. The European Union, in particular, will have to put in place smart policies that push the political demarcation line as far as possible to the east, at least while the current Kremlin leadership remains in power and places Russia outside of the European security acquis.

Finally, a word on the importance of the civil society dialogue on arms control, disarmament, and nonproliferation: Official channels to Moscow remain blocked, but maintaining contacts among academia, the expert communities, and citizen groups in Russia and the West will become even more important. The agenda for such interactions may be less ambitious, and personal meetings will be more difficult, but direct contacts must be fostered wherever possible. Maintaining such bridges to Russia will be crucial to work toward better times and to be prepared when they arrive, hopefully in the not too distant future.

Oliver Meier is a senior researcher at the Institute for Peace Research and Security Policy at the University of Hamburg.