The submission has prompted mixed reactions in Congress. Republicans have generally expressed support, but some Democrats said it is inconsistent with the concerns President Joe Biden raised on the campaign trail about the ambition and price tag of the modernization plans, which grew significantly over the past four years.

A Congressional Budget Office (CBO) report published in May estimated the cost of the Trump administration’s approach at $634 billion from fiscal years 2021 through 2030. (See ACT, June 2021.) That is an increase of $140 billion, or 28 percent, from the CBO’s previous 10-year projection two years ago. (See ACT, March 2019.) 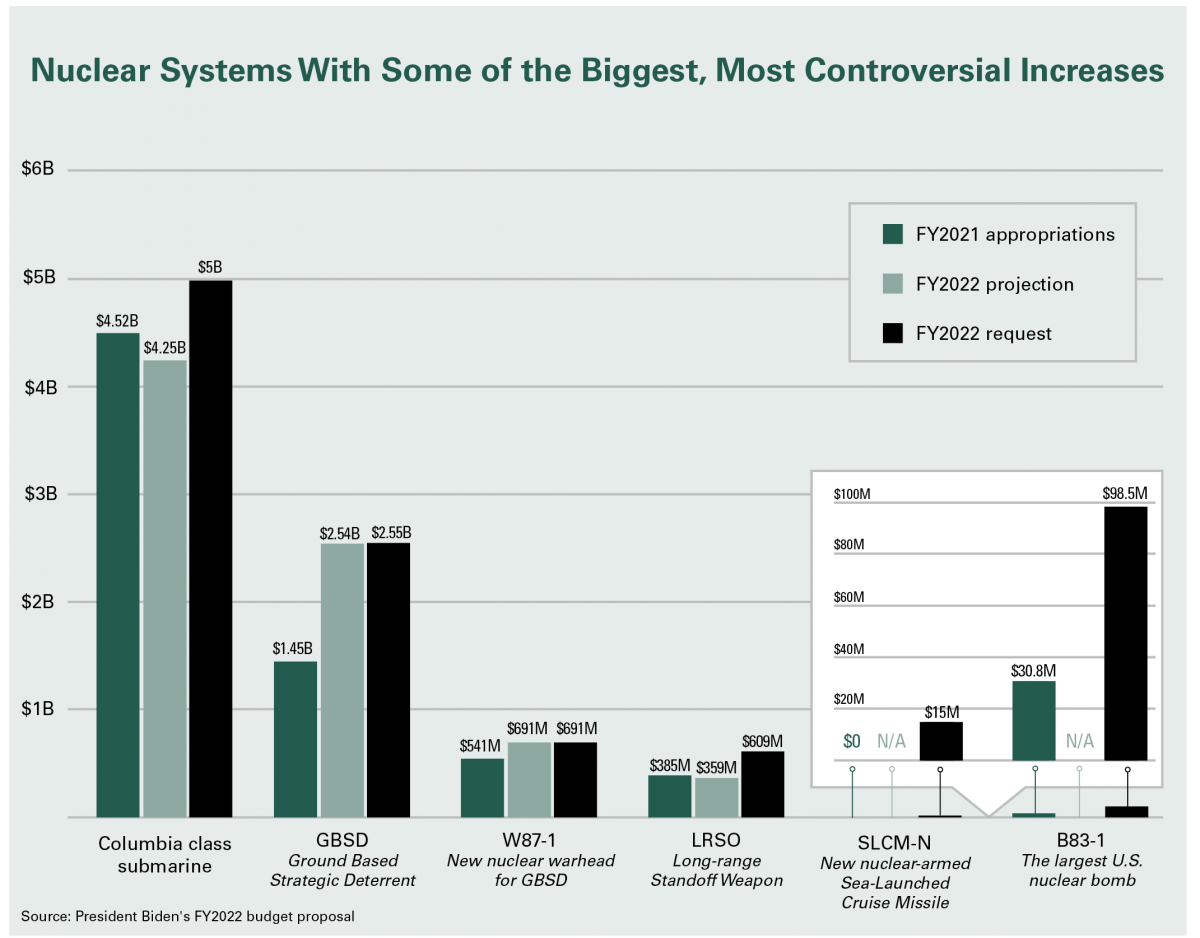 Whether the fiscal year 2022 budget proposal turns out to be a placeholder pending the outcome of the administration’s forthcoming Nuclear Posture Review (NPR) or a harbinger that Biden intends to stick with the Trump plans remains to be seen.

The administration is requesting $43.2 billion in 2022 for the Defense and Energy departments to sustain and modernize U.S. nuclear delivery systems and warheads and their supporting infrastructure. That includes $27.7 billion for the Pentagon and $15.5 billion for the Energy Department’s semiautonomous National Nuclear Security Administration (NNSA).

The proposed spending on nuclear weapons constitutes about 5.7 percent of the total national defense request of $753 billion.

A direct comparison of the Biden submission to what President Donald Trump requested and Congress largely supported in fiscal year 2021 ($44.5 billion) and what Trump projected to request for 2022 ($45.9 billion) is difficult because the Biden proposal appears to reclassify how spending on nuclear command, control, and communications programs is counted, leading to a lower requested amount.

The 2022 budget “invests in nuclear modernization efforts, and the department will always seek to balance the best capability with the most cost-effective solution,” he added.

The budget request would notably continue the controversial Trump proposals to expand U.S. nuclear capabilities. (See ACT, March 2018.) It includes $15 million to begin development of a new low-yield nuclear sea-launched cruise missile (SLCM), nearly $134 million for a new high-yield submarine-launched ballistic missile warhead (the W93) and associated aeroshell, $98.5 million for indefinite sustainment of the megaton-class B83-1 gravity bomb, and nearly $1.9 billion to build the capability to expand the production of plutonium pits, or cores, for nuclear warheads to 80 per year.

As with most new administrations, the Biden administration only had time for a quick reexamination of the fiscal year 2022 budget plans bequeathed by its predecessor. But the Pentagon did review some nuclear weapons programs, notably the Trump plans for a new low-yield submarine-launched ballistic missile warhead variant, known as the W76-2, and the new nuclear-armed SLCM. (See ACT, April 2021.)

The Navy began fielding the W76-2 in late 2019. (See ACT, March 2020.) The new cruise missile is undergoing an analysis of alternatives to determine possible options for the weapons system.

The future of the new cruise missile appears to be a controversial issue within the Pentagon. Despite the inclusion of funding for it in the budget request, guidance issued by acting Navy Secretary Thomas Harker on June 4 called on the service not to fund the weapons system in fiscal year 2023.

The budget request would also sustain plans that began during the Obama administration to replace long-range delivery systems for all three legs of the nuclear triad.

The proposed growth in spending on nuclear weapons continues to force difficult choices for the Pentagon as to what other priorities must be cut back, especially at a time when military budgets are flat. Overall, the administration is seeking $753 billion for national defense programs in 2022, an increase of 1.7 percent from 2021 but a 0.8 percent decrease from the Trump inflation growth projection for 2022 of $759 billion.

Rear Adm. John Gumbleton, the Navy’s budget director, told reporters on May 28 that the service’s decision to buy one instead of two new destroyers “was absolutely an affordability question, where the goal of the department was to balance the first priority, which was investment in Columbia[-class submarine] recapitalization.”

The administration’s request of about $15.5 billion for nuclear weapons activities at the NNSA is an increase of $139 million above the 2021 level appropriated by Congress, but a decrease of about $460 million from the Trump projection of $15.9 billion for 2022.

In addition to funding the new warhead and facility projects first proposed by Trump, the request also keeps on track programs for the B61-12 gravity bomb, W87-1 ICBM, and W80-4 ALCM warhead upgrade.

The budget request would seem to be inconsistent with statements Biden made during the campaign to adjust Trump’s spending plans.

Biden told the Council for a Livable World in responses to a 2019 candidate questionnaire that the United States “does not need new nuclear weapons” and that his “administration will work to maintain a strong, credible deterrent while reducing our reliance and excessive expenditure on nuclear weapons.”

Rep. Pramila Jayapal (D-Wash.) expressed concern that the budget request “expands almost every nuclear [weapons] program proposed by the previous administration” at a June 9 hearing on the budget request with acting Office of Management and Budget Director Shalanda Young.

Young said that as the administration begins the NPR process, Biden “remains committed to taking steps to reduce the role of nuclear weapons.” She added, “So you see a continuation of a program but [it’s] certainly subject to what [the NPR process] will yield out.”

Austin said that process will begin “very shortly,” and other administration officials have indicated it will be closely tied to a larger Pentagon defense strategy review. It remains to be seen, however, whether the review will be a stand-alone review, as past ones have been, or subsumed within an integrated deterrence review that also addresses missile defense, space, and cyberspace issues.

Sen. Deb Fischer (R-Neb.), the ranking member on the Senate Armed Services strategic forces subcommittee, on June 10 echoed other Republicans when she lauded the request for prioritizing nuclear modernization and keeping the programs to recapitalize the nuclear triad “on track.”

But she and other Republican lawmakers expressed concern about reports that the Navy might cancel the SLCM program prior to the commencement of the NPR process.

Austin told the Senate Armed Services Committee that the memo was “predecisional” and that the fate of the weapons system would be determined by the administration’s review.