The United States will spend a total of $634 billion over the next 10 years to sustain and modernize its nuclear arsenal, according to the latest projection by the Congressional Budget Office (CBO). The estimate is 28 percent higher than the previous 10-year projection released in 2019 and could exacerbate concerns about the necessity and the sustainability of the current nuclear modernization effort amid what experts predict will likely be a flat defense budget in the coming years. 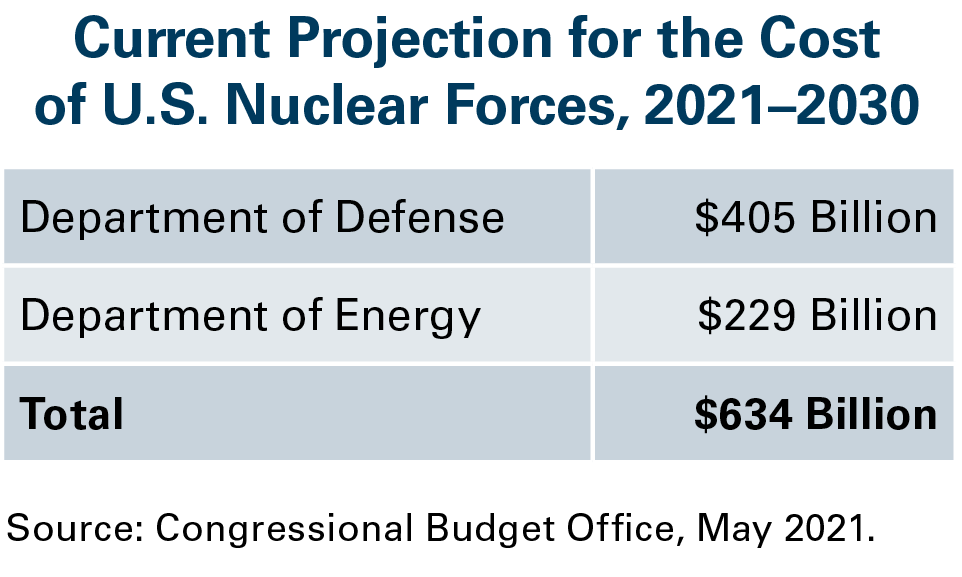 The CBO report, published May 24, includes the projected costs to sustain and modernize U.S. delivery vehicles, warheads, and their associated infrastructure across a range of programs that are managed by the Defense Department and the Energy Department’s semiautonomous National Nuclear Security Administration (NNSA). The report estimates that the $634 billion in planned spending in fiscal years 2021–2030 will consume 6.0–8.5 percent of projected total spending on national defense during those years.

The 2019 CBO report had forecast total U.S. spending on nuclear forces at $494 billion through 2028 and estimated that the annual cost during those years would be 5–7 percent of the national defense budget. (See ACT, March 2019.)

Another 50 percent or so of the increase results from inflation and from the fact that the 2021 report begins and ends two years later than the previous projection, the CBO calculated. The other 15 percent reflects the estimated cost of growth beyond projected amounts.

Within the triad of nuclear delivery systems, projected spending on the U.S. fleet of ballistic missile submarines increased significantly, with the CBO putting the total price tag at $145 billion over 10 years, which is a $38 billion increase from the previous CBO estimate. The CBO attributed some of the increase to higher operating costs for the current fleet and plans to operate some of the submarines longer than initially planned.

The cost of U.S. intercontinental ballistic missiles is projected to grow to $82 billion over 10 years, $21 billion more than the 2019 projection. The CBO said that was due primarily to the difference in time periods covered by the reports.

In addition, the CBO report estimates that the United States will spend $53 billion over the next 10 years on strategic bombers. The CBO notes that the estimate only covers a quarter of the costs of the B-52 bomber and the new B-21 bomber because the rest of the costs are assigned to the bombers’ conventional, not nuclear, mission. If the full cost of B-52 and B-21 bombers were included, the total cost of nuclear forces would be $711 billion, including cost growth.

CBO projections are based on the plans reflected in the fiscal year 2021 budget requests that the Defense and Energy departments under the Trump administration submitted in February 2020, “provided those plans did not change or experience any cost growth or schedule delays.” The CBO also assumed that the Pentagon would move forward with directives listed in the 2018 Nuclear Posture Review, such as the fielding of a new sea-launched cruise missile (SLCM), although this program is believed to be under review by the Biden administration. (See ACT, April 2021.)

The CBO report said that the estimate of the costs of the SLCM and its warhead of about $10 billion from 2021 to 2030 “is highly uncertain; in fact, it is still not clear whether the program will be pursued at all and, if so, what the design and development schedule will be.”