International inspectors found an undeclared chemical warfare agent in Syria during a September 2020 visit, according to a monitoring report released April 23. The report, issued by the Organisation for the Prohibition of Chemical Weapons (OPCW), suggests that Syria may still be producing chemical weapons despite being censured by the group for repeated chemical weapons use. 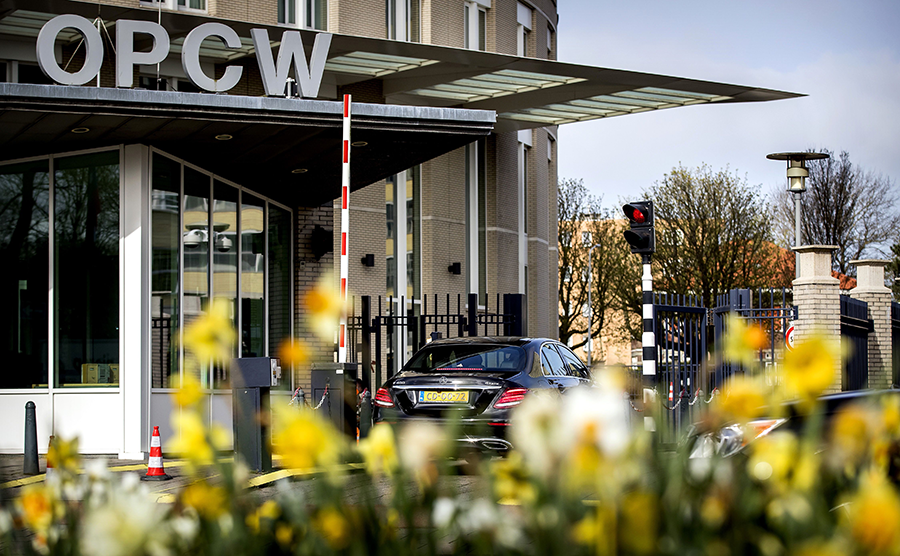 As a state-party to the Chemical Weapons Convention (CWC), Syria is expressly prohibited from producing, stockpiling, or using chemical weapons. Syria joined the treaty in 2013, but reports of chemical weapons attacks by Syrian forces have emerged since the UN-OPCW operation in 2013–2016 to remove and destroy the country’s declared chemical weapons arsenal, raising questions about the validity of Syria’s initial stockpile declaration.

To resolve outstanding issues and verify the completeness and accuracy of that declaration, the OPCW established the Declaration and Assessment Team (DAT) in 2014, but Syria has repeatedly refused to cooperate with the team’s work. Together with the findings of the April report, the OPCW so far has recorded and is investigating 20 outstanding issues pertaining to Syria’s initial declaration.

Of chief concern is whether Syria is continuing to produce chemical warfare agents and expand its arsenal in blatant defiance of the CWC. Izumi Nakamitsu, the UN high commissioner for disarmament, briefed the Security Council on the discovery of the new Syrian chemical agent on May 6 and said the nature of the agent, “inside storage containers of large volume at a previously declared chemical weapons facility,” could imply undeclared and ongoing chemical weapons production activities. The disarmament chief neglected to name the new chemical warfare agent, but Syria has already declared its production of nerve agents sarin and VX, as well as sulfur mustard.

In March, OPCW Director-General Fernando Arias told the global chemical weapons watchdog’s Executive Council that “unknown, potentially significant quantities of chemical warfare agents” had yet to be declared by Syria. The OPCW reportedly also called on Damascus to declare its production or weaponization of a nerve agent at an unnamed chemical weapons production facility. For these and other reasons, according to a March briefing by Nakamitsu, “the declaration submitted by [Syria] cannot be considered accurate and complete.” (See ACT, April 2021.)

It is not clear whether the newly discovered chemical warfare agent pertains to the OPCW’s call that Syria declare its production or weaponization of a nerve agent. The April report does not provide any specifics on the agent, only that it is “neat,” meaning complete and undiluted. The OPCW Technical Secretariat informed the Syrian government on April 16 that a new outstanding issue would be opened and discussed by the DAT in mid-May.

Syria’s chemical weapons program will remain a matter of principal concern for the OPCW Executive Council until the program is verifiably eliminated, Vidmantas Purlys, Lithuania’s ambassador to the OPCW, said during an interview on May 18 with Arms Control Today. Purlys is serving as a vice chair of the council alongside permanent representatives to the OPCW from Ecuador, Germany, and Iran and council Chairperson Abdelouahab Bellouki of Morocco.

The council plays a pivotal role in enforcing compliance with the CWC. In April 2020, following publication of a damning OPCW report attributing a series of chemical weapons attacks to the Syrian government, the council called on Syria to declare the entirety of its stockpile to the OPCW. (See ACT, May 2020.)

Syria failed to meet that deadline, and in April 2021, CWC states-parties voted to adopt an unprecedented resolution co-sponsored by Lithuania to temporarily revoke Syria’s rights and privileges under the CWC until it declares its stockpile and returns to compliance with the treaty. (See ACT, May 2021.)

Purlys urged the international community to continue pushing Syria to comply fully with its CWC obligations and to cooperate with the OPCW. “Use of chemical weapons is [a] grave violation of international law and those responsible for their use must be held accountable and brought to justice,” he said.

The Executive Council will meet again on July 6–9 at The Hague.