In a further effort to prevent the spread of weapons of mass destruction (WMD), the United Kingdom is making it a priority to minimize the use of highly enriched uranium (HEU) around the world in its new role as chair of a multilateral initiative. 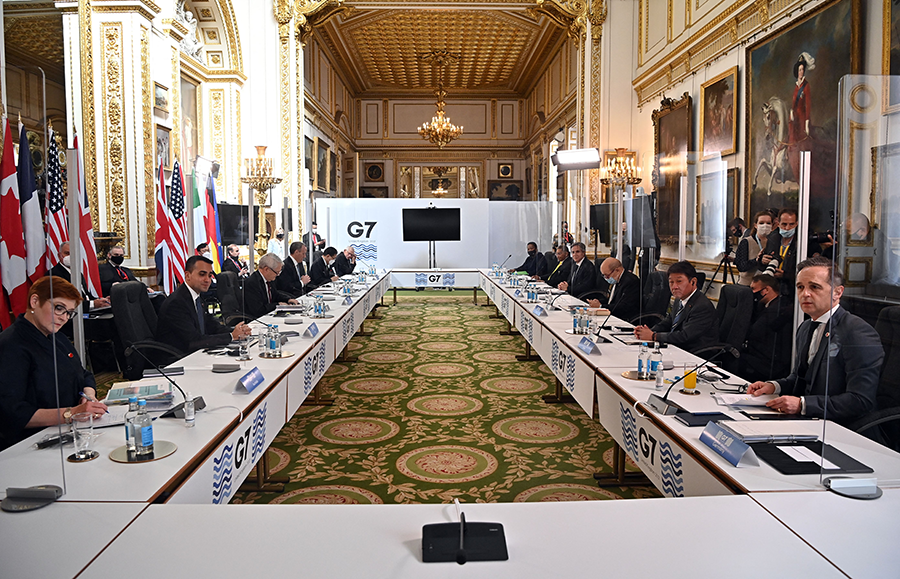 HEU contains at least 20 percent of the fissionable isotope uranium-235. Uranium enriched to this level and greater poses a risk because it can be used for nuclear weapons or nuclear terrorism. Twenty-two countries possess at least one kilogram of HEU.

The UK seeks to “reinvigorate” HEU minimization efforts in 2021, according to an official statement laying out the goals for the Global Partnership Against the Spread of Weapons of Mass Destruction. Reducing the production and use of HEU “enjoys broad support but requires more solid political support,” the statement said.

The partnership was created by the Group of Eight, now the Group of Seven (G7), in 2002 to prevent terrorists from acquiring nuclear, chemical, and biological weapons. Initially focused on disposing of weapons of mass destruction and dismantling production facilities for those weapons in the former Soviet Union, the partnership has expanded to 31 member states and implements projects worldwide to reduce the risks of nonstate actors acquiring weapons of mass destruction. The initiative uses a matchmaking process to pair states looking for assistance in mitigating WMD-related threats with states looking to donate funds or relevant expertise.

The partnership is also one of five international initiatives charged with continuing the work of the nuclear security summits. At the 2016 summit, the 52 participating states agreed that the partnership should provide assistance for the “safe, secure and timely consolidation of nuclear materials inside countries, removal of such material to other countries for disposal…and minimizing HEU” where feasible. The state leading the G7 also chairs the Global Partnership and sets yearly priorities for the initiative.

The G7 affirmed the UK’s decision to prioritize HEU minimization in an April 19 statement, pledging to “accelerate national and international steps to manage the risks posed” by nuclear and radioactive materials and to encourage states with civil stocks of HEU to “further reduce or eliminate them where economically and technically feasible.”

The UK statement did not contain any details about specific projects or activities for 2021, but said the UK hopes to “secure new or increased financial and non-financial contributions for practical programming initiatives.”

Nickolas Roth, director of the Stimson Center’s Nuclear Security Program and International Nuclear Security Forum, told Arms Control Today in a May 18 email that although “significant hurdles to further progress” on HEU minimization remain, there are things the partnership can do to advance the effort.

Roth recommended encouraging states to “support and implement INFCIRC 912,” an International Atomic Energy Agency (IAEA) document that advocates reporting the status of HEU national stockpiles and the reduction or disposal of them to the agency. Roth also said the partnership could facilitate dialogue about the “technical and political hurdles to further progress” on minimization.

One drawback is that the partnership is not currently working with Russia, which has “more nuclear material in more facilities than any other country,” so other initiatives are needed to engage Russia, he stated.

There are already two ongoing, multiyear projects that address HEU minimization as part of the partnership’s nuclear security working group, according to an annex released in March 2021 that details the initiative’s activities over the prior year. One is a collaborative project among the United States, Japan, Kazakhstan, and four European countries to produce low-enriched uranium (LEU) fuels that can be used in research reactors to produce medical isotopes. The project also aims to convert reactors using HEU for that medical purpose into using LEU as an alternative.

Roth said the partnership can advance this effort by “identifying opportunities for international collaboration that can speed up the process for converting research reactors” to run on LEU fuel.

There are 72 research reactors that still use HEU fuel worldwide, according to the IAEA. Seventy-one others have already been converted to use LEU fuel, and 28 were shut down.

A second multiyear project is a collaboration among the United States, Japan, Kazakhstan, and Ukraine to dispose of weapons-usable nuclear materials.

As chair of the multilateral initiative in 2020, the United States focused on enhancing chemical security and building capacity to respond to biological incidents. (See ACT, July/August 2020.) According to the project annex released by the United States in March 2021, the partnership spent $669 million to implement 245 projects in 2020, several of which supported efforts to respond to the COVID-19 pandemic.

Canada, for instance, provided support for South Africa to acquire the necessary laboratory equipment to rapidly process COVID-19 tests and for the Association of Southeast Asian Nations to acquire personal protective equipment to help respond to the pandemic in 2020, according to the project annex.

The UK said the second major priority for the Global Partnership in 2021 will be biosecurity. Specifically, the partnership will look to build on a project proposed by Canada to work with the Africa Centers for Disease Control to mitigate biological threats, according to the UK statement.