May 2021
By Kingston Reif and Shannon Bugos

The U.S. Air Force plans to send the two Boeing OC-135B aircraft used for overflight missions under the 1992 Open Skies Treaty to the scrapyard in Arizona in May or June, sparking concern that the Biden administration may not return the United States to the accord. 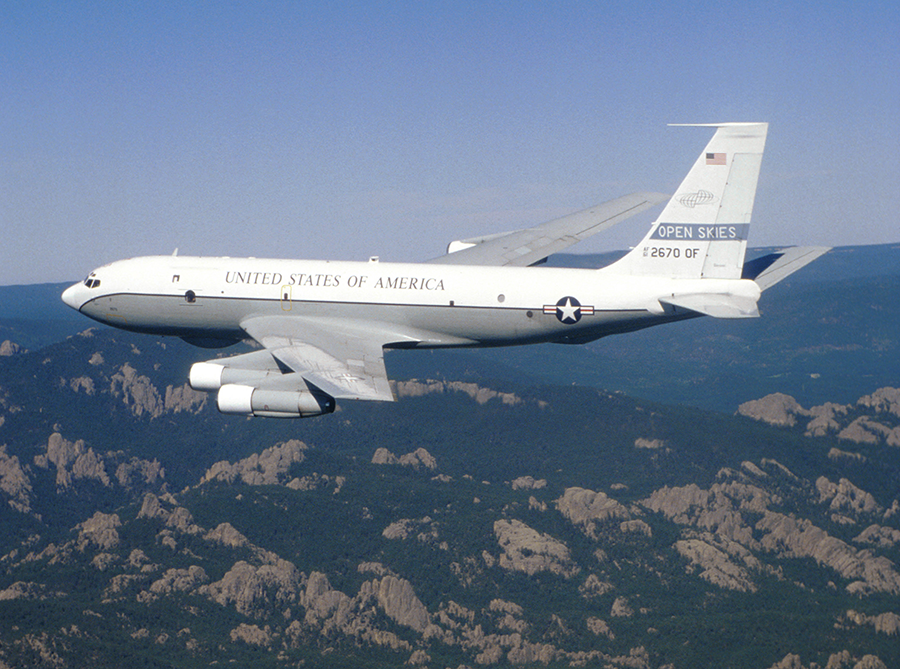 The Air Force will also dispose of the suite of cameras, called sensors, on the planes after spending $41.5 million in fiscal year 2020 to replace the wet-film cameras with new digital sensors for both aircraft. The Trump administration’s fiscal year 2021 budget request did not include any request for overflight funding.

The Trump administration withdrew the United States from the treaty in November 2020, a move that President Joe Biden had condemned as illustrative of President Donald Trump’s “short-sighted policy of going it alone and abandoning American leadership.” At the time of withdrawal, a senior U.S. official said that the Pentagon had begun to liquidate the equipment. (See ACT, November 2020.)

The Biden administration has “determined they’re not going to do Open Skies anymore,” Rep. Don Bacon (R-Neb.) told the Omaha World Herald, which first reported on the fate of the aircraft on April 3. “It treats it as matter-of-fact that we’re out of the treaty,” he said, adding, “I wish it wasn’t that way, but it is.”

But a spokesperson for the National Security Council told The Wall Street Journal on April 5 that the administration’s decision on U.S. participation in the accord “is separate from previously scheduled activities relating to aging equipment.”

Instead of flying its own equipment, the United States could resume participation in the treaty by working with allies who are states-parties on joint missions and using their aircraft for overflights.

The Biden administration has not officially announced its position on a possible return to the treaty.

“No decision has been made on the future of U.S. participation” in the treaty, a State Department spokesperson told Arms Control Today on April 12. “The United States is actively reviewing matters related to the treaty and consulting with our allies and partners.”

Defense News reported on April 7 that the State Department sent a diplomatic note to allies and partners on March 31 expressing concern that “agreeing to rejoin a treaty that Russia continues to violate would send the wrong message to Russia and undermine our position on the broader arms control agenda.”

“While we recognize that Russia’s Open Skies violations are not of the same magnitude as its material breach of the 1987 INF [Intermediate-Range Nuclear Forces] Treaty, they are part of a pattern of Russian disregard for international commitments—in arms control and beyond—that raises questions about Russia’s readiness to participate cooperatively in a confidence-building regime,” the note read according to Defense News.

But the note reportedly also said that the administration believes “there are circumstances in which we return to” the treaty “or include some of” the treaty’s “confidence-building measures under other cooperative security efforts.”

The Biden administration did not detail its concerns about Russian noncompliance in the diplomatic note but, in the annual State Department compliance report released April 15, echoed two assertions made by the Trump administration when it withdrew from the accord. The report cited concerns that Russia was violating the agreement because it has limited the distance for observation flights over the Kaliningrad region to no more than 500 kilometers and it has prohibited missions over Russia from flying within a 10-kilometer corridor along its border with the conflicted Georgian border regions of South Ossetia and Abkhazia.

Last year, U.S. Secretary of State Mike Pompeo also claimed that Moscow used overflights to gather intelligence on crucial U.S. infrastructure, although another Trump administration official simultaneously argued that the treaty relies on outdated technology and aircraft. (See ACT, July/August 2020.) Russia has denounced the claims as “far-fetched” and argued that Washington has created “barriers” to the implementation of the treaty.

Russian Foreign Minister Sergey Lavrov said on April 8 that Russia does not have “any idea whether the Americans will return to the treaty or not, but we hope that this matter will be sorted out soon.”

In December 2020, Russia sought written guarantees from the remaining states-parties that they would neither transfer information obtained under the treaty to the United States nor prohibit flights over U.S. bases in Europe, but multiple states-parties dismissed Moscow’s request. The following month, Russia began domestic procedures for withdrawing from the treaty and said it plans to conclude those procedures by the end of May. (See ACT, March 2021.) After officially notifying states-parties, Moscow could withdraw in six months’ time, as stipulated by the treaty.

But Russia has said that it would reconsider its move to withdraw from the accord if the United States returned to the agreement. Lavrov commented on April 8 that Moscow would “respond constructively and reconsider” its plan to withdraw if Washington decided to rejoin the treaty but that Russia “cannot wait indefinitely.”

Kommersant, a Russian newspaper, reported on March 27 that Moscow rejected the first request, which came from France, for an overflight following the U.S. withdrawal, out of concern that the information gathered would be shared with Washington. The official reason attributed the rejection to restrictions in place due to the coronavirus pandemic. Two sources told the newspaper that Moscow has maintained the possibility of not accepting overflights at all and not conducting any treaty flights itself until the Biden administration determines whether to return to the accord.

Signed in 1992 and entering into force in 2002, the treaty permits each state-party to conduct short-notice, unarmed observation flights over the others’ entire territories to collect data on military forces and activities. Treaty proponents say such information sharing promotes stability.