May 2021
By Kingston Reif and Shannon Bugos 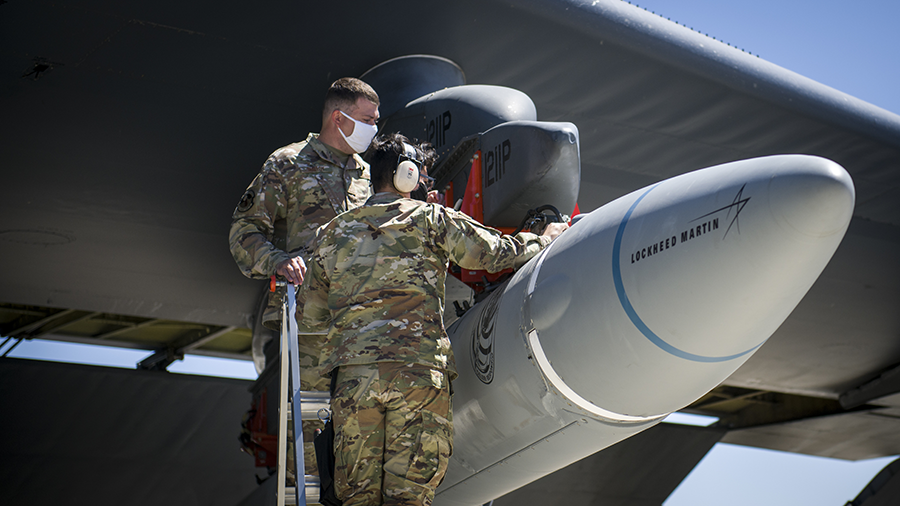 The test vehicle was meant to launch from a B-52 bomber, but “the test missile was not able to complete its launch sequence,” and the bomber returned to Edwards Air Force Base in California, according to an Air Force statement.

The test followed seven captive-carry flight tests, in which the aircraft carries the vehicle but does not release it, during 2019 and 2020. The April test, which was delayed from a scheduled December 2020 date, was intended to assess booster performance and simulate the separation of the booster from the boost-glide vehicle.

“The ARRW program has been pushing boundaries since its inception and taking calculated risks to move this important capability forward,” said Brig. Gen. Heath Collins, the program executive officer for weapons and director of the armament directorate at the Air Force Materiel Command, Eglin Air Force Base, Fla. “While not launching was disappointing, the recent test provided invaluable information to learn from and continue ahead. This is why we test.”

The Air Force plans to achieve an initial operating capability for the program in fiscal year 2022. Congress appropriated $387 million for it for fiscal year 2021.

The program is one of several prototype hypersonic boost-glide vehicle development programs underway at the Pentagon. The Army and the Navy have teamed up on the development of a common hypersonic glide-body vehicle, which conducted a successful flight-test experiment in March 2020. (See ACT, April 2020.) The Army plans to use the vehicle on mobile ground platforms in its Long-Range Hypersonic Weapon program, while the Navy aims to pair it with a submarine-launched booster system for its Conventional Prompt Strike program.

Hypersonic weapons travel at least five times the speed of sound. Hypersonic boost-glide vehicles are distinguished from traditional ballistic missiles by their ability to maneuver and fly at lower altitudes.

The ARRW test followed the release of a report by the Government Accountability Office (GAO) on March 22 that called for the Pentagon to clarify the roles and responsibilities of the 78 or more U.S. government organizations involved in hypersonic weapons development.

The GAO identified 70 efforts to develop hypersonic weapons and related technologies across the Defense Department in collaboration with the Energy Department and the National Aeronautics and Space Administration, at a projected price tag of about $15 billion from fiscal years 2015 through 2024. “Without clear leadership roles, responsibilities, and authorities,” says the GAO report, the Defense Department “is at risk of impeding its progress toward delivering hypersonic weapon capabilities and opening up the potential for conflict and wasted resources as decisions over larger investments are made in the future.”

The report added that defense officials describe “their development approach as acknowledging and accepting technology risk early in the program in order to achieve an operational hypersonic capability sooner, in line with [Defense Department] modernization priorities and in accordance with senior leaders’ guidance.”

Pentagon officials have given varying rationales for rushing forward with development. One involves keeping pace with China and Russia as they build similar weapons. Others include augmenting U.S. conventional war-fighting capabilities to defeat the air and missile defenses of advancing adversaries and to destroy time-sensitive targets.

Some experts have warned that new hypersonic weapons could increase the risk of rapid escalation in a conflict or crisis. (See ACT, January/February 2018.)

“Current plans call for as many as 40 flight tests over the next 5 years,” says the report, and the Defense Department relies on one long-range flight-test corridor that cannot handle such a busy schedule.

“If programs are unable to conduct as many flight tests as they planned, they will be forced to either proceed to an operational capability with fewer tests (and thus less knowledge), or to accept the delay, with schedule and cost consequences,” according to the report.