The U.S. Navy of the future will be comprised of as many unmanned, robotic ships as of conventional vessels with human crews, Defense Secretary Mark Esper announced in an Oct. 6 address. Outlining his vision in a presentation of “Battle Force 2046,” the Navy’s projected fleet of a quarter-century from now, he said the naval lineup will consist of about 500 combat ships, of which up to 240 will be unmanned surface and subsurface vessels. 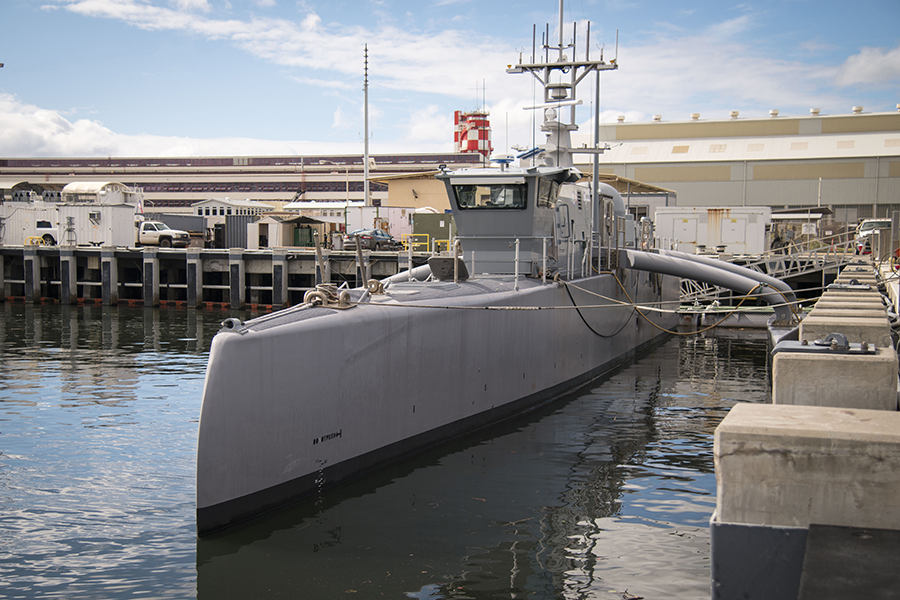 These robot ships “will perform a wide range of missions, from resupply to surveillance, to mine-laying and missile strikes,” said Esper at the Center for Strategic and Budgetary Assessment. They will do so, moreover, “at an affordable cost in terms both of sailors and dollars.”

Traditionally, U.S. aircraft carriers and their accompanying ensemble of cruisers and destroyers manned by large crews and fliers have symbolized U.S. military might, but such large capital ships have become increasingly costly to build and operate. Furthermore, in this new era of great-power competition and tension, carrier-centric flotillas are becoming dangerously vulnerable to enemy anti-ship missiles. To address these challenges, the Navy envisions a force comprised of small numbers of large manned vessels accompanied by large numbers of small unmanned ships. Such a fleet, it is argued, will be far less costly than one composed exclusively of manned vessels and a fleet that can be deployed in highly contested areas with less concern about the loss of any individual ship.

To make this dream possible, the Navy plans to invest billions of dollars in the development and procurement of three types of unmanned warships: a Medium Unmanned Surface Vessel (MUSV), a Large Unmanned Surface Vessel (LUSV), and an Extra-Large Unmanned Undersea Vessel (XLUUV). The MUSV is intended as a combat-ready variant of the Sea Hunter prototype first put to sea in 2016. The LUSV, thought to be a militarized version of a commercial oil rig servicing vessel, is being developed by the Pentagon’s Strategic Capabilities Office. The XLUUV, derived from the Echo Voyager diesel-electric submersible, is being built by Boeing. In its budget request for fiscal year 2021, the Defense Department requested $580 million for development work on all three systems. It expects to spend $4.2 billion over the next five years to complete development work and begin procurement of combat-ready vessels.

The Navy hopes to save money in this mammoth undertaking by using commercial technology when designing the hulls and propulsion systems for these new types of warships. But it still faces a mammoth challenge in equipping the ships with automated command-and-control systems, which would allow them to operate autonomously for long periods of time and carry out complex military functions with little or no human oversight.

The artificial intelligence systems needed to make this possible have yet to be perfected, and many analysts worry that, in a highly contested environment with extensive electronic jamming, such ships could “go rogue” and initiate combat operations that have not been authorized by human commanders, with unforeseen but dangerous consequences. (See ACT, March 2018.)