The Treaty on the Prohibition of Nuclear Weapons (TPNW) will enter into force Jan. 22, a date set by the Oct. 24 ratification of the pact by Honduras. The treaty terms call for it to take effect 90 days after the 50th nation deposits its ratification or accession with the United Nations. 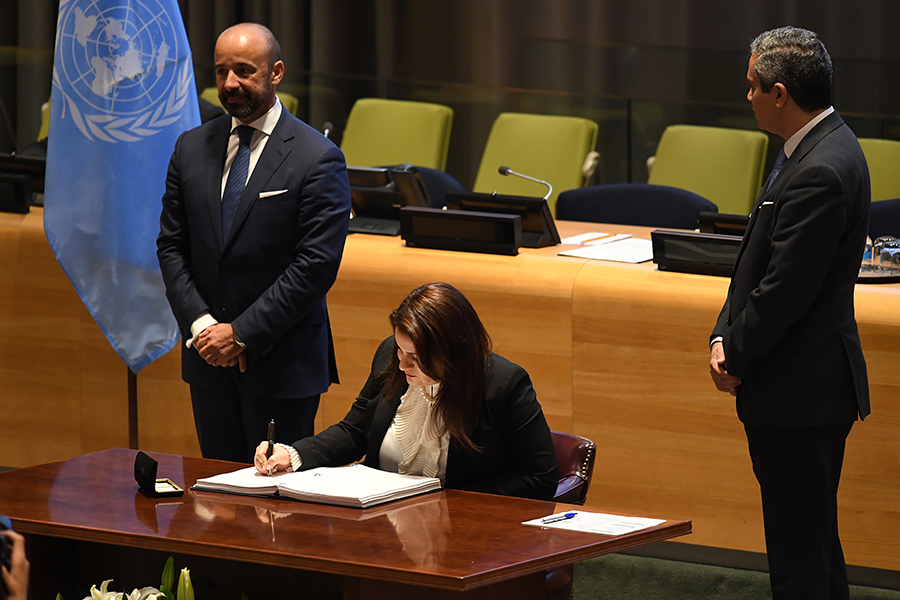 For the first time since the invention of the atomic bomb, nuclear weapons development, production, possession, use, and threat of use and the stationing of another country’s nuclear weapons on a state-party's national territory are all expressly prohibited in a global treaty. Negotiations on the TPNW were concluded in July 2017 after a negotiating conference involving more than 120 states. The initiative emerged after a series of three international conferences on the humanitarian impacts of nuclear weapons held in 2013–14.

Stéphane Dujarric, spokesman for UN Secretary-General António Guterres, said in an Oct. 24 statement that the entry into force of the TPNW is “the culmination of a worldwide movement to draw attention to the catastrophic humanitarian consequences of any use of nuclear weapons. It represents a meaningful commitment towards the total elimination of nuclear weapons, which remains the highest disarmament priority of the United Nations.”

The 50th ratification came on the 75th anniversary of the ratification of the UN Charter, which is celebrated annually as UN Day.

Beatrice Fihn, executive director of the International Campaign to Abolish Nuclear Weapons, which was awarded the 2017 Nobel Peace Prize, said in a statement that “the 50 countries that ratify this treaty are showing true leadership in setting a new international norm that nuclear weapons are not just immoral but illegal.”

U.S. officials, meanwhile, are actively lobbying states to withdraw their support for the treaty. A letter that accompanied a nonpaper listing U.S. concerns about the TPNW sent in October, stated that “[a]lthough we recognize your sovereign right to ratify or accede to the Treaty on the Prohibition of Nuclear Weapons (TPNW), we believe that you have made a strategic error and should withdraw your instrument of ratification or accession.”

The U.S. letter, which was delivered to a large number of states and was first reported by the Associated Press, claims that the five original nuclear powers and all of member of NATO “stand unified” in their opposition to the “potential repercussions” of the treaty. The U.S. nonpaper claims that the TPNW is “dangerously counterproductive” to the nuclear Nonproliferation Treaty (NPT).

One of those five powers, China, issued a more conciliatory view in a Twitter statement on Oct. 24: “China has always been advocating complete prohibition and thorough destruction of nuclear weapons, which is fundamentally in line with purposes of [the treaty]. China will continuously make relentless efforts towards a nuclear-weapon-free world.”

TPNW negotiators have repeatedly underscored that the new treaty seeks full complementarity between the NPT and the new agreement. They also note that the pact advances the existing NPT safeguards regime by legally obliging its states-parties to keep in place any additional safeguards arrangements they have voluntarily agreed to implement with the International Atomic Energy Agency.

According to Thomas Hajnoczi, director for disarmament, arms control, and nonproliferation for the Austrian Foreign Ministry, “[T]he TPNW did not create a parallel universe to the traditional one founded on the NPT.” In an article published in The Nonproliferation Review earlier this year, Hajnoczi argues that, “on the contrary, it makes the existing universe of legal instruments around the NPT stronger.”