Nailing the Coffin of Civilian Plutonium 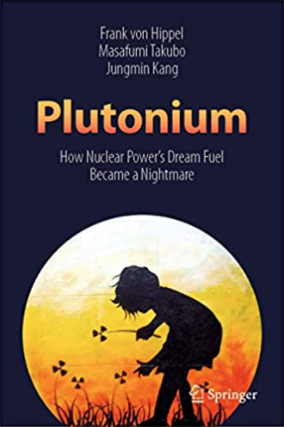 Even in the world of speculative investment bubbles, it would be difficult to find a parallel to the business of making plutonium. This “industry” has seen massive investment by private and mostly governmental funds in pursuit of creating the world’s most dangerous material, an investment that has failed to yield a single dollar in returns. Nevertheless, a combination of scientific ambition, bureaucratic inertia, and governmental hubris keeps alive a dream that should have been smothered long ago.

Leave it to three highly experienced specialists to briefly recount the history, clearly explain the physical realities, and precisely pick apart the ever-weakening arguments that have supported reprocessing spent nuclear fuel into a new plutonium-based fuel. Frank von Hippel, Masafumi Takubo, and Jungmin Kang accomplish all of this in Plutonium: How Nuclear Power’s Dream Fuel Became a Nightmare. Its planned translation into Japanese and Korean should help citizens participate in critical upcoming decisions about continuing plutonium projects by governments in Tokyo and Seoul.

The earliest rationale for using plutonium as a nuclear fuel rested on the fact that spent nuclear fuel, the leftover material from civilian nuclear power plants, still contained far more potential energy than had yet been consumed. In the 1970s, uranium was believed to be scarce in the natural environment, and the full utilization of its energy capacity made some engineering, logical, and economic sense. In succeeding decades, the economic rationale has been constantly undermined by the realization that natural uranium is sufficiently plentiful that its price is no longer the primary cost factor in nuclear power generation, by the unanticipated complexity of building advanced reactors optimized to use plutonium as fuel, by the cost of new and necessary safety regulations applicable to all reactors, and most recently by the continued fall in
the cost of generating renewable energy.

In the face of these realities, only France, at a substantial economic loss, currently operates a full program for recovering plutonium from spent fuel for use as new nuclear fuel. Russia reprocesses spent fuel and is now testing plutonium in a breeder reactor. Japan has indicated it plans to open one of the world’s largest reprocessing plants in Rokkasho in the next two years, but that two-year time frame has been the boilerplate forecast for each of the past 10 years. India is actively reprocessing civilian spent fuel, and China is constructing a major facility for that purpose. South Korea has announced an end to its nuclear power program, but some officials and experts retain the aspiration to pursue civilian reprocessing.

No other nuclear-powered nation is actively pursuing “closing” the nuclear fuel cycle by reprocessing plutonium for energy generation. The economic and technical realities forced one country after another—Germany, Belgium, Switzerland, the United Kingdom, then the United States—to end their own efforts.

This weak support highlights the merits of the authors’ arguments. They systematically deconstruct the political and technical arguments in favor of such programs. Crucially, they demonstrate the factual inaccuracy of the primary argument advanced by Japanese and South Korean advocates that reprocessing spent fuel will diminish the volume and danger of nuclear waste that must ultimately be stored in geological repositories. They also knock down convincingly the claim that plutonium that is reactor grade, as opposed to weapons grade, is unusable in an explosive device.

Although it may be the prerogative of sovereign states to spend their own money irrationally, the authors focus also on important externalities, in particular the threat to the world’s security and environment from the continued production of plutonium. A commitment to the closed fuel cycle delays the inevitable decision that must be made by Japan and South Korea concerning permanent safe storage of spent fuels, a decision on which the United States also continues to procrastinate. In addition, it leads to unsafe practices concerning the storage of spent fuel rods destined for reprocessing. The authors describe for the first time how close the world was to a greater disaster in 2011, as overcrowded spent fuel cooling ponds could have led to a much greater radiation release following the accident at Japan’s Fukushima Daiichi nuclear plant. The authors explain that moving the spent fuel to interim dry cask storage would avert such catastrophic risks.

Of still greater concern is the risk that even a sliver of the massive plutonium stockpiles could be acquired by terrorists to use in a nuclear explosive device or a panic-inducing radiological dispersion device. Since plutonium was first fabricated 80 years ago, nations have created more than 500 tons of what is arguably the world’s most dangerous material. The International Atomic Energy Agency defines a “significant quantity” of plutonium, or enough to make a nuclear weapon, as eight kilograms, although even a Nagasaki-size blast could be generated with significantly less plutonium. Thus, the 300 tons of plutonium designated for civilian use would be sufficient to create more than 35,000 warheads.

Continuing to accumulate plutonium is not only a terrorism risk, but also a source of tension between states. There is concern in Beijing that Japan holds greater stocks of separated plutonium than China and in Seoul that South Korea holds none. The authors note briefly but tellingly the normally unstated security considerations that in part motivate civilian reprocessing programs: an intention to sustain a latent weapons capacity.

The authors make a convincing case for the international community to act together to end further production of separated plutonium. The effort to negotiate a fissile material cutoff treaty, which would ban production of plutonium for weapons, remains frozen in a glacier at the Conference on Disarmament. Whether or when it moves ahead, there is a separate compelling need to negotiate a ban on civilian separation of plutonium.

Although less than 200 pages, Plutonium is not light reading. Its economic and scientific arguments are compact, thoroughly documented, and clear even to lay people. For policymakers and the public, it provides a clear picture of a dream whose claimed benefits have all evaporated but whose danger remains ominously present.

Thomas Countryman is the chair of the Arms Control Association Board of Directors. He served 35 years in the U.S. Foreign Service, retiring in 2017 as acting undersecretary of state for arms control and international security.

Nuclear Weapons Ban Treaty to Enter Into Force: What's Next?

New START in Limbo Ahead of U.S. Election