North Korea’s production of nuclear weapons continues despite aggressive sanctions, according to an article by CNN on Aug. 4 of an unreleased report by a UN panel of experts. The new report says Pyongyang has likely developed the capability to manufacture miniaturized nuclear devices that can fit on its ballistic missiles. 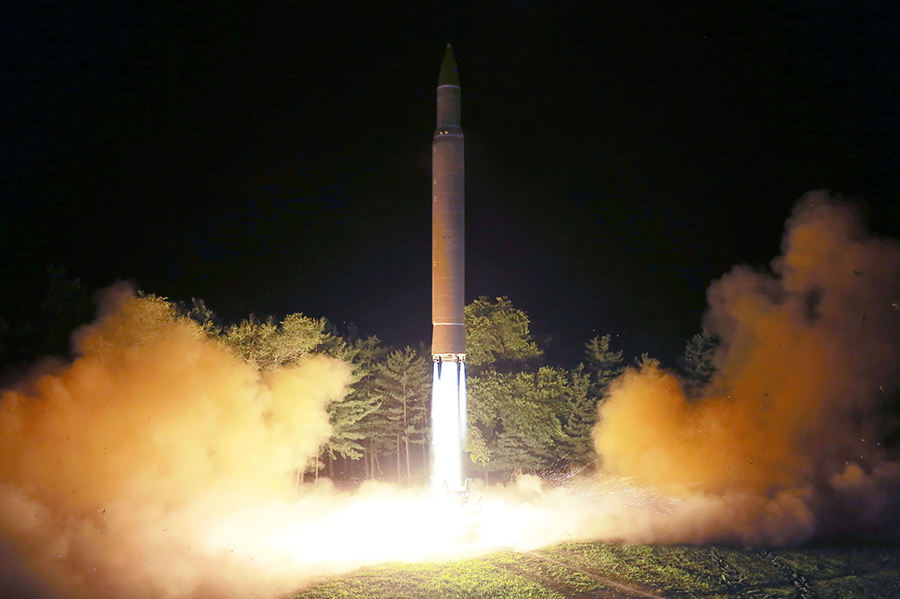 The UN report also details one member state’s independent conclusion that North Korea “may seek to further develop miniturisation in order to allow incorporation of technological improvements such as penetration aid packages or, potentially, to develop multiple warhead systems.”

Mastery of warhead miniaturization suggests that North Korea could ostensibly deliver a nuclear weapon via its ballistic missiles, including its long-range systems. Although North Korea has not tested a nuclear weapon since September 2017, the experts who contributed to the report assessed that the country’s six nuclear tests likely aided its development of miniaturized warheads.

As they continue to advance, Pyongyang’s nuclear and missile capabilities increasingly threaten the security of its neighbors in the region. Japan’s 2020 Defense White Paper, released in July, acknowledged for the first time that North Korea possesses the ability to attack Japan. The Japanese Defense Ministry noted that, in addition to miniaturized warheads, “North Korea is presumed to have acquired atmospheric re-entry technologies required for the operationalization of Nodong and Scud-ER ballistic missiles, within whose range Japan lies.” According to the ministry, this suggests North Korea “already has the ability to attack Japan with nuclear weapons fitted to these ballistic missiles.”

Pyongyang slammed Japan’s white paper as “a stream of nonsense on our possession of nuclear weapons,” according to a July 15 foreign ministry statement carried by the state-run Korean Central News Agency. But North Korean leader Kim Jong Un touted the country’s nuclear weapons program during a July 28 speech. “Thanks to our reliable and effective self-defense nuclear deterrence, the word ‘war’ would no longer exist on this land, and the security and future of our state will be guaranteed forever,” he said. In May, Kim presided over a meeting of North Korean military officials who pledged to implement “new policies for further increasing the nuclear war deterrence of the country.” (See ACT, July/August 2020.)

North Korea is also accelerating its fissile material production, the UN panel report finds. According to an Aug. 4 analysis by Oliver Hotham at NK News, who saw the report, the enrichment facility at Yongbyon is operational, and an experimental light-water reactor located within the complex is under construction. Once completed, that reactor may be used to produce plutonium. As of now, North Korea’s five megawatt-electric gas-graphite reactor is the country’s only known source of plutonium, but that reactor is believed to have remained inoperative since 2018.

The report also examines the topic of unconfirmed enrichment activities at Kangson, which has been identified by several open-source analysts but has never been addressed by Pyongyang. Ankit Panda, a researcher with access to the classified report, wrote in NK Pro on Aug. 7 that the report says the states that have inquired about Kangson “do not have information to confirm that the facility in Kangson is for the uranium enrichment.” In 2018, the International Atomic Energy Agency concluded that the facility at Kangson is “not inconsistent” with an enrichment plant, and also said that the “timeline of [the facility’s] construction is not inconsistent” with North Korea’s reported uranium-enrichment program.

On a broad scale, the UN panel report exemplifies the extent to which a global sanctions campaign has failed to stifle North Korea’s weapons of mass destruction programs, in particular its development of nuclear weapons and advanced ballistic missiles. The report identifies several instances in which North Korean entities may have succeeded in circumventing UN sanctions to engage with sanctioned groups in China and Russia.

In one case, the report details Pyongyang’s Second Economic Committee’s attention to undertaking sustained “efforts to procure dual-use ‘choke point items’ from foreign sources.” Panda explained that these dual-use items could include the large, liquid-propellant engines in Pyongyang’s intercontinental ballistic missile fleet, for example. Because the report has not been made public, it remains unclear whether the referenced foreign groups transferred actual materials or equipment, or whether the transfer to North Korea consisted of technical know-how only. According to Panda, the UN report cites concerns about North Korean technicians that may be involved in collaborative international scientific and technical research.

The United States has not openly acknowledged the report. But U.S. Ambassador to the UN Kelly Craft said on Aug. 5 that North Korea’s nuclear program continues to jeopardize security in the region. It is “something we keep a very close eye on,” she said.