The United States is prioritizing the security of chemicals to help restore the norm against chemical weapons use during its chair of the Global Partnership Against the Spread of Weapons of Mass Destruction for 2020, a State Department official told Arms Control Today. 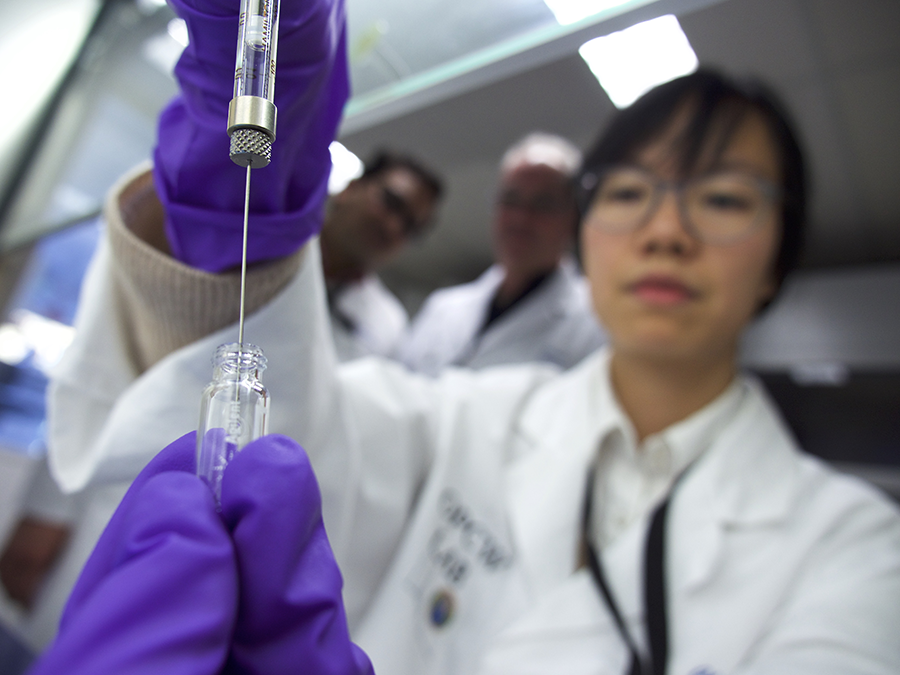 Increasing biological security will also be a key area of focus for the Global Partnership, as the coronavirus pandemic has renewed attention on the “catastrophic impact” that a biological weapon could have, the official said in a June 17 interview.

The Global Partnership is a multilateral initiative founded in 2002 to prevent the use and proliferation of chemical, biological, radiological, and nuclear weapons.

Although there is continuity in the scope of the working groups, the chair of the initiative can determine priorities for each over the course of a year.

The State Department official said the United States is focused on building capacity through donations during its chairmanship and on strengthening dialogue between partnership states to take into account their threat assessments and programming priorities. The official said the United States also wants to emphasize the importance of donor involvement and challenge all partners in the initiative to make substantial contributions. This includes focusing on the Global Partnership’s matchmaking process for implementing projects across the range of WMD threats. Such matchmaking pairs countries in need of assistance with state donor funding and expertise. As chair, the United States will seek to “tap into an evolving set of requirements on one side, and the priority of funding on the other, and try to match the two,” the State Department official explained.

The partnership’s significant efforts to strengthen chemicals security over the past few years has strengthened the regime and contributed to the capacity of the Organisation for the Prohibition of Chemical Weapons (OPCW).

The United States plans to build on this work, and efforts to restore the norm against chemical weapons use will be a “centerpiece” of the Global Partnership’s work in 2020, the official said. The official noted that the working group plans to further develop best practices for chemicals security infrastructure and continue to build a network of experts on which the international community can draw.

The Global Partnership has a number of ongoing projects that support these goals. The United States announced $7 million in funding for the OPCW’s center for chemistry and technology and has funded a project since 2011 to assist states in securing chemicals and assessing the evolving threat of chemical weapons use. Afghanistan, Bangladesh, Egypt, India, Indonesia, Lebanon, Morocco, Nigeria, and Pakistan are some of the states that have benefited. Germany, in connection with the OPCW, funded workshops on chemicals security from 2009 to 2020 for professionals working in chemicals industries in Africa, Asia, and South America.

In the biological security working group, the official said the United States is concerned that nefarious actors are “paying attention to the consequences of the current pandemic” and may too become interested in biological weapons. The officials said that the pandemic has highlighted gaps in biosecurity and noted that some states have already requested help through the initiative to respond to the coronavirus pandemic. Requests for assistance have included training for using personal protective equipment correctly.

The United States is also looking to prioritize building biological incident response capabilities and developing sustainable practices to minimize the risk of a future, intentional biological incident, the official said. The official also noted important progress on linking global health and security efforts in 2019 and said the United States will continue that work.

Past projects funded by the partnership have focused on capacity building to respond to biological threats. Germany funded a project in the Sahel region of Africa from 2016 to 2018 that established a regional response network, and Japan funded work during 2017–2019 to build capacity to diagnose infectious tropical diseases in Democratic Republic of the Congo.

In the nuclear and radiological security working group, the United States is focusing on a range of issues, including enhancing operational resilience; supporting implementation of the 2005 amendment to the Convention on the Physical Protection of Nuclear Material, the parties to which will hold a conference in 2021; and priorities identified in the action plan released during the 2016 nuclear security summit.

The Global Partnership was one of five organizations tasked with continuing the work of the nuclear security summits, which aimed to secure and minimize weapons-usable nuclear materials in civil programs and raise awareness of the threat of nuclear terrorism.

The partnership’s action plan includes supporting efforts to increase cybersecurity and insider threat mitigation and working with the IAEA on nuclear security priorities.

The working group is scheduled to meet in July to discuss how the partnership can build on the IAEA’s February 2020 nuclear security conference.

The partnership has also contributed to continuing efforts to secure nuclear and radiological materials. The United States, for instance, is funding a 10-year effort through 2024 to secure high-threat radioactive sources in Kazakhstan, and Canada is working with nine Latin American countries from 2018 to 2022 to set up nuclear detection architecture to detect material outside of regulatory control.

The CBRN working group is taking a different approach to its mandate in 2020, the official said, noting that efforts will focus on implementing export controls and creating consensus recommendations on areas including addressing sanctions evasion and countering proliferation financing. The official said the working group will continue to advance implementation of UN Security Council Resolution 1540, which requires states to prevent WMD proliferation to nonstate actors and work more closely with the World Customs Organization on its capacity-building programs. The United States also hopes to revitalize matchmaking on CBRN projects and make strategic trade controls a permanent focus of the working group.

The United States is currently engaged in a multiyear program with a number of states in the Asia Pacific and East African regions to devise strategic trade controls and better enforce UN Security Council sanctions targeting North Korean proliferation.

The Global Partnership’s 31 members are primarily located in North America and Europe, but the United States has no plans to expand the initiative’s membership at this time. The State Department official said Washington hopes to strengthen existing members’ participation and to implement new project proposals through the matchmaking process.

The State Department official said that the pandemic has created new challenges for the initiative, but noted that the Global Partnership is taking an innovative approach to virtual meetings that allow the initiative’s threat reduction work to continue. Partners now facilitate virtual engagements, remote training, and distance learning in place of their regular activities.