South Korea has furthered the development of its missile forces this spring, conducting two tests of the new Hyunmoo-4, which boasts an 800-kilometer range and an estimated payload capacity of 2 metric tons. The payload capacity is greater than any current missile in the nation’s arsenal. Although South Korea conducted both tests in March, news of the tests did not emerge until early May. South Korean media reported that just one of these flew successfully, and South Korean officials have not publicly confirmed or commented on the tests. 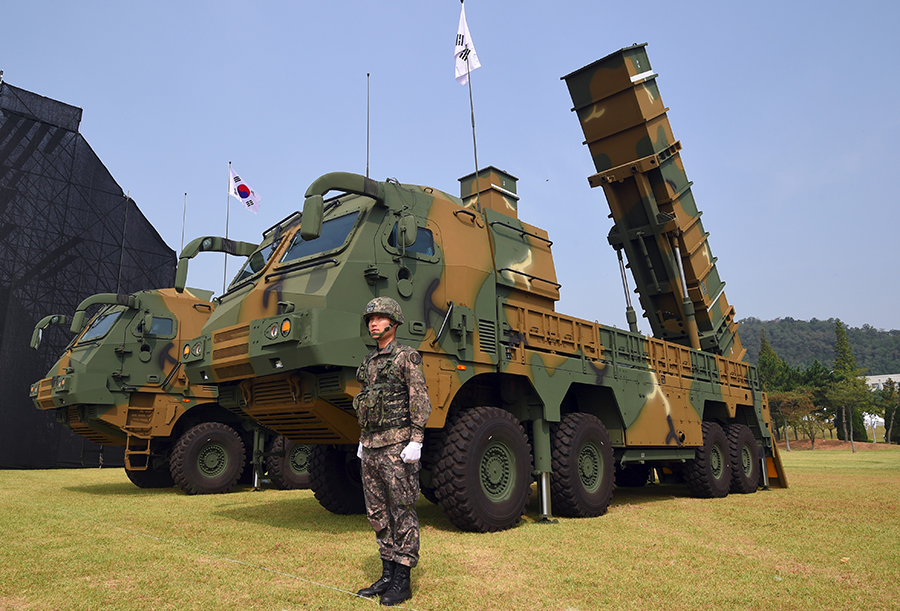 The launches were conducted at the South Korean Agency for Defense Development’s Anheung test site. The missile’s specifications are unconfirmed, but analysts have estimated that the Hyunmoo-4 is solid fueled and similar in design to the Hyunmoo-2 missile, although with a considerably larger payload. The Hyunmoo-4’s payload capacity is made possible by a 2017 revision to U.S.-South Korean missile guidelines that eliminated a payload cap of 500 kilograms for missiles with ranges of 800 kilometers.

When South Korea joined the Missile Technology Control Regime (MTCR) in January 2001, it negotiated an agreement with the United States dictating that it would limit its ballistic missiles to a 300-kilometer range and a 500-kilogram payload. (See ACT, March 2001.)

Under the MTCR, members commit to control exports of missiles and related technology capable of delivering that payload a distance of 300 kilometers or more. South Korea’s adherence to MTCR guidelines marked an expansion of a 1979 U.S.-South Korean memorandum of understanding under which South Korea’s missile program was limited to missiles with a range of 180 kilometers and a 500-kilogram payload in exchange for U.S. assistance in ballistic missile development.

The extended 800-kilometer range was sought by Seoul and Washington as an appropriate measure to offset the threat posed by North Korea’s ballistic missile development. (See ACT, November 2012.) But the revision did not go unnoticed by regional nonproliferation experts, who protested that the expanded range was counterproductive to long-term ballistic missile nonproliferation efforts. The amendment was seen as an MTCR exemption due to the fact that although South Korea’s missiles are indigenously built, U.S. assistance has bolstered South Korea’s ballistic missile development and U.S. assistance was offered in exchange for South Korea’s pledge to temper its missile program.

The U.S. Defense Department announced in August 2017 that Washington would again revisit the guidelines constraining South Korea’s missile program in order to shore up Seoul’s defense against Pyongyang. Pentagon spokesman Capt. Jeff Davis said at the time that “there is currently a limit on the warhead size and missiles that South Korea can have and, yes, it is a topic under active consideration.” In December 2017, in part motivated by North Korea’s sixth nuclear test that September, U.S. President Donald Trump and South Korean President Moon Jae-in formally agreed to lift the payload caps on Seoul’s ballistic missiles. The 800-kilometer-range limit remains in place. (See ACT, December 2017.)

Experts have recently speculated that although the Hyunmoo-4 meets the 800-kilometer-range limit, the missile’s booster could be used to develop a longer, medium-range missile with a lighter payload in the future.

South Korea undertook the Hyunmoo-4 test at a similar time to when North Korea conducted a set of short-range missile tests. North Korea launched its first missile test of 2020 on March 1 and proceeded to conduct three additional tests that month. (See ACT, March 2020.)

Pyongyang did not comment on the Hyunmoo-4 test, but did condemn a South Korean military exercise conducted May 6, a day prior to South Korea’s belated announcement of the Hyunmoo-4 test. In a May 8 statement published by the state-run Korean Central News Agency, a spokesperson for North Korea’s armed forces criticized South Korea of warmongering and said the drill did “not help the efforts to defuse tension on the Korean peninsula.”

Amid these tensions, Japanese, South Korean, and U.S. officials met virtually on May 12 and 13 for the 12th round of trilateral defense talks. According to a May 13 Pentagon statement, the representatives discussed the ongoing threat posed by North Korean nuclear and missile provocations and reaffirmed their commitment to trilateral security.