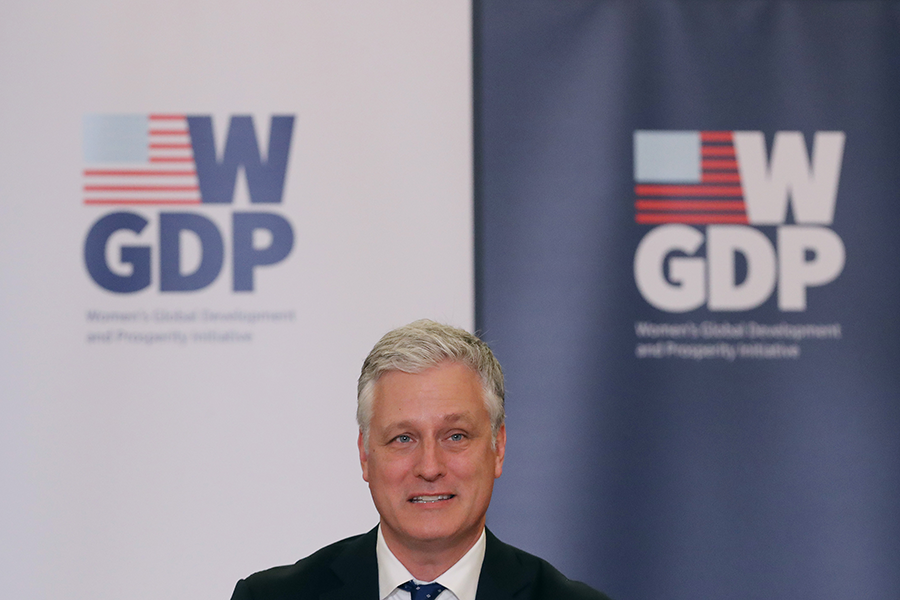 “We’ll be sitting down with our Russian colleagues very soon,” O’Brien said Feb. 11. “We’ll have to wait and see how those negotiations play out.”

He also acknowledged—the first time an administration official has done so—that China has no interest in joining the negotiations. “So far, and this is not surprising, the Chinese are not interested in arms control,” he said.

The New Strategic Arms Reduction Treaty (New START), signed in 2010, will expire on Feb. 5, 2021, unless the United States and Russia mutually agree to extend it by up to five years.

Moscow stands ready to extend New START immediately and without any preconditions, according to remarks Russian President Vladimir Putin made in late 2019, but the Trump administration has yet to make its decision regarding the future of the accord. During his Feb. 11 remarks, O’Brien said he would not “get into conditions or that sort of thing in this context or in this forum” on potential U.S. preconditions for extending New START. U.S. officials have previously said Washington prefers to seek a more comprehensive deal that covers additional types of nuclear weapons and includes China.

Senior administration officials addressed bringing China into the arms control process at a Feb. 14 background briefing for reporters at the White House, but the administration has not yet put forward a proposal for a new accord. “Now is the time for China to put its money where its mouth is and prove that it is a responsible international actor,” said one official, Reuters reported.

“On New START, we have made no decision on a possible extension as we are focused on addressing a broader range of threats beyond just the weapons subject to the treaty,” another official said.

For its part, China has consistently expressed its opposition to trilateral talks with the United States and Russia. “This position is very clear and has been widely understood by the international community, including Russia,” Chinese Foreign Ministry spokesperson Geng Shuang told reporters on Jan. 22. The United States “constantly makes an issue of China on this to dodge and shift its responsibilities for nuclear disarmament,” he said.

Robert Wood, the U.S. permanent representative to the Conference on Disarmament in Geneva, claimed on Jan. 21 that Washington and Moscow had reached an “understanding” about pursuing trilateral talks with China. “Hopefully over time and through the influence of others besides the United States, [China] will come to the table,” he said.

Soviet Foreign Minister Sergey Lavrov, however, stated on Feb. 10 that Moscow “will not try to convince China” to join the talks. “If the Americans are quite sure that it makes no sense to take any further steps on the New START…without China, let them get down to business on this all on their own,” he said. “Even if a multilateral process gets under way, it will be utterly protracted,” and “we ought to have a safety net in an extended New START.”

“We have told the Americans as much,” he said. “They are still silent.”

In addition to pursuing trilateral talks with Russia and China, Christopher Ford, the U.S. assistant secretary of state for international security and nonproliferation, said on Dec. 20 that the United States had invited China to begin a bilateral strategic security dialogue. Fu Cong, director of the arms control department at the Chinese Foreign Ministry, remarked on Feb. 12 at a conference of nuclear-weapon states in London that Beijing will answer Ford’s proposal “soon.”

Another reported hindrance to the U.S. effort to negotiate a more comprehensive replacement for New START is the Trump administration’s inability to find a lead negotiator for the undertaking. The administration has offered the role to several potential candidates, but no one has agreed to take it, Politico reported on Feb. 12.

Calls from key foreign leaders and former officials to extend New START have intensified amid the administration’s continued indecision on the future of the accord.

“It is critical that the New START…be extended beyond 2021,” said French President Emmanuel Macron in a Feb. 7 speech on defense and deterrence. The uncertainty regarding the treaty’s future, he said, contributes to “the possibility of a return of pure unhindered military and nuclear competition by 2021.” Macron joined other U.S. allies, such as Finland, Germany, and the United Kingdom, in endorsing the treaty’s extension.

The Aspen Ministers Forum, a group of former foreign ministers from around the world, released a statement on Feb. 10 also supporting prolonging the treaty. “Extending New START would lay solid groundwork and build momentum towards increased international cooperation in the new decade,” they stated.

Meanwhile, the United States and Russia resumed their dialogue on strategic security on Jan. 16 in Vienna. The State Department said the two sides discussed “nuclear stockpiles and strategy, crisis and arms race stability, and the role and potential future of arms control, including the importance of moving beyond a solely bilateral format.” The dialogue will continue, and the two sides will “begin expert-level engagement on particular topics in the near future,” according to the State Department.

In remarks to the press after the January meeting, Russian Deputy Foreign Minister Sergey Ryabkov commented that the talks were “difficult” and that Russia does not have a clear understanding of Washington’s overall strategic plan for arms control.

New START caps U.S. and Russian strategic nuclear arsenals at 1,550 deployed warheads, 700 deployed missiles and heavy bombers, and 800 deployed and nondeployed missile launchers and bombers each. It also put into place a rigorous inspections and verification regime, on which the U.S. military relies for knowledge about the Russian arsenal.

While declining to share his advice to the Trump administration on New START’s extension, Gen. John Hyten, current vice chairman of the Joint Chiefs of Staff and former commander of the U.S. Strategic Command (STRATCOM), recently emphasized the importance of the accord.

“If you’re the STRATCOM commander, New START is really important,” Hyten said Jan. 17. “It allows you to posture your force and understand what you have to do in order to deter the adversary, Russia in this case, and tells you what you have to do. It also gives you insight into the Russian nuclear forces because of the verification regime.”