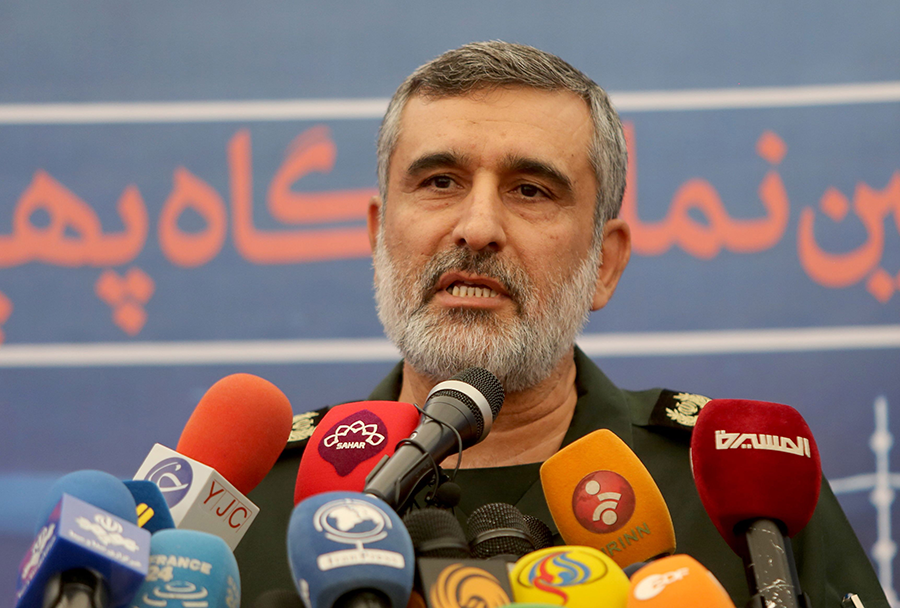 The new missile, named the Ra’ad-500, has a range of 500 kilometers, according to the Islamic Revolutionary Guard Corps (IRGC) Aerospace Force Command. Iran has previously developed missiles with similar ranges, but the command described the Ra’ad as lighter and more accurate.

The IRGC ceremony also featured a rocket engine fueled by a “new generation of propellants” and incorporating “moveable nozzles” for ballistic missiles and satellite launch vehicles. IRGC Aerospace Force Brig. Gen. Amir Hajizadeh said the technology will give Iran the ability to “control solid-fuel missiles in the outer space.”

France, a member of the multilateral group that negotiated the 2015 nuclear deal with Iran, said in a Foreign Ministry statement on Feb. 10 that Iran’s ballistic missile program “undermines regional stability and affects the security of Europe.” The statement called on Iran to “fully comply with its international obligations.”

UN Security Council Resolution 2231, which endorsed the 2015 nuclear deal, includes nonbinding language calling on Iran to refrain from activities relevant to developing ballistic missiles designed to be nuclear capable. The nuclear-capable missile threshold is generally understood to be a system that can deliver a 500-kilogram payload at least 300 kilometers.

Although the new missile appears to exceed that limit, Iran argues that its ballistic missiles are not designed to carry nuclear weapons and therefore not covered by Resolution 2231.

Ahmad Hosseini, spokesman for the Iranian Defense Ministry, said on Feb. 9 that the first two stages of the rocket “functioned properly” and the “satellite was successfully detached from its carrier” but failed to achieve the necessary speed to enter orbit. Despite the failure, Hosseini described the launch as “remarkable.”

The Zafar-1 is the heaviest satellite Iran has attempted to launch and would have been used for remote sensing and communications, according to the Ministry of Information and Communication Technology.

Iran has successfully launched satellites into orbit in the past, but recently suffered a string of failures. The Simorgh’s previous two launches, in 2017 and 2019, also failed to orbit satellites.

Although the language on testing is nonbinding, Resolution 2231 prohibits Iran from transferring missiles and related technologies without approval from the Security Council. The United States has accused Iran of violating that provision on multiple occasions, and the UN secretary-general continues to investigate alleged incidents of illegal transfers.

The United States announced on Dec. 4 that it had seized a cache of Iranian missile components headed for Yemen in violation of international law.

U.S. Defense Department spokesman Cmdr. Sean Robertson said the initial investigation into the seized parts “indicates that these advanced missile components are of Iranian origin,” but did not provide any details on what was seized. Reportedly, the U.S. Navy and the U.S. Coast Guard boarded a small boat in the Arabian Sea on Nov. 27 and discovered the cache, which has been described as the most advanced missile components bound for Yemen that the United States has intercepted.

A biannual report from the UN secretary-general on implementation of Resolution 2231 did not cover the seizure confirmed by the Pentagon on Dec. 4, but it said that the secretary-general’s office is investigating a U.S. allegation that Iran received a shipment containing a compound that can be used for solid-fueled rocket motor propellant in violation of Resolution 2231.

France, Germany, and the United Kingdom also informed the secretary-general’s office that Houthi forces in Yemen launched a new medium-range ballistic missile that shares similar features to an Iranian system, the Qiam-1. They said that Iran “may be acting in breach” of Resolution 2231.

In a letter to the secretary-general, Iran denied the claim made by the European countries and said the argument that Resolution 2231 prohibits the transfer of missile technology is a “distortion of the text.” Iran also said that, for “political reasons,” the Security Council has been prevented from “actual operationalization for the necessary mechanism for making required decisions to permit such activities.”

The Dec. 10 report also included the secretary-general’s assessment of the cruise missiles and unmanned aerial vehicles used in an attack against Saudi oil facilities in September.

Saudi Arabia provided the secretary-general’s office with access to debris from the attack and said on Sept. 18 that the weapons used were Iranian made. The United States also accused Iran of being behind the attack.

The secretary-general’s office examined the debris and was “unable to independently corroborate” that those systems came from Iran, but said that investigations into the origins of the systems are ongoing.